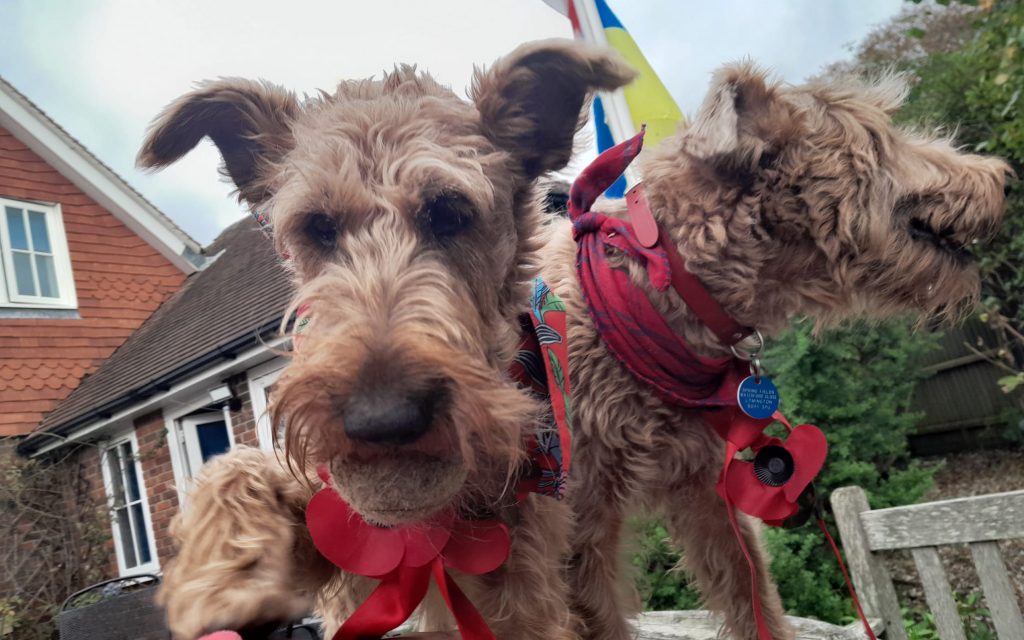 A letter at last and I’m sorry to have taken so long but we have managed to keep in touch with messages on the website and thank you for the many charming emails you have sent. It has not been an easy time for any of us and perhaps sharing our troubles may have helped a little.

One good little piece of news is that the cataract operation has dramatically improved the sight in my right eye which is a blessing.

I managed, with the help of a driver, to get up to London for the Animal War Memorial gathering.

Because of a tube strike, the traffic was a nightmare getting into London and most people didn’t make it.

We were a very diminished group but did our best to salute the animals.

I always love it when the cavalry horses canter up through the park, but it was considered unsafe to bring them through such dense traffic.

Derek and Richard arrived on time – bless them, and darling Daisy was the only Mick in sight. She enjoyed all the fuss that was made of her and she certainly filled my heart with joy.

Arabella (Dorman) walked all the way from her studio in Chelsea and the four of us (plus Daisy) held the line for the Irish Terriers and of course there was a wreath from us for the Airedales and Collies too. It was strange and sad without Brenda, but her wreath was put in place by Richard.

On Sunday we were back in Lymington and placed a wreath on the War Memorial in the High Street. Miss Libbs and Maryb were much in evidence with everyone admiring the red scarves and poppies on their collars.

They played the crowds as only the Micks can and we were joined by a darling puppy, called Georgie and his 11 year old ‘Master’.

He mistook LB and MB for his mother and they rose to the occasion and played with him so sweetly. Poor little chap was very frightened when the guns went off but we gathered round to reassure him and Libbs wouldn’t stop barking, I think she was ready to do battle and defend us all. When we got home they fell in a heap and slept the afternoon away.

The weather is extraordinary, winds and rain that pulled one of my favourite roses off the wall followed by barmy days and summer clothes – quite ridiculous for November. 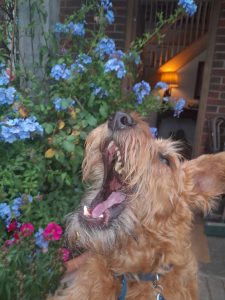 Our dearly loved dog walker Marie has been away for 2 months sorting out family problems after her step mother died suddenly, after a riding accident.

We are thrilled to have her back – I am more than delighted!

She takes them out early every morning except for weekends, which leaves me free to do the weekends and ‘wee whirls’ along the sea wall. It suits them perfectly, they were delighted to see her and I felt she was even more pleased to see them. 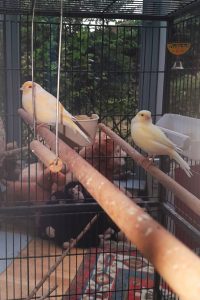 you for your kind sympathy when our darling Mr Biggles died.

I’m afraid I was heartbroken and it was 2 weeks before the little girls, Primrose and Celandine, would even come out of their cage.

Biggles was 17 and had been the source of enormous amusement and daily adventures all his life.

I remember one occasion when he spent 3 1/2 hours running sideways along the top wire of my cousin’s tennis court. He knew his name and whenever I called (which was most of the time), he‘d turn his head and give me that ‘Do shut up’ look. We lured him into his cage with a little posy of seed grass by which time all the Grandchildren had arrived with ladders and shrimping nets to catch him!

Primmy and Diney have completed what is called the ‘Autumn Eclipse’, which means they are back in full feather and Primmy has produced some wonderful peach coloured feathers. I always said “Biggles is the only man to actually live here” – he was such a vibrant little speck of life and we all loved him.

Did you all see the pictures of Derek and Daisy in last week’s Saturday Times?

What a picture, what a photograph!
And Daisy with her head on one side, knows about cameras. 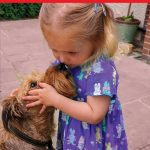 alendars arrive next week and I’ll get them into the post as soon as possible, it is a help if we can beat the Christmas rush – I do hope you’ll like it.

We’re think of putting a new gallery of pictures coming in through the year and you can let us know which are your faves.

With many greetings and my special love to the dogs. 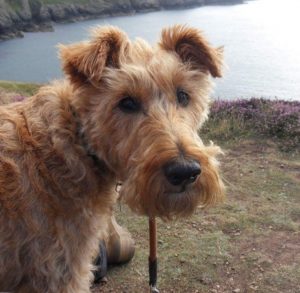