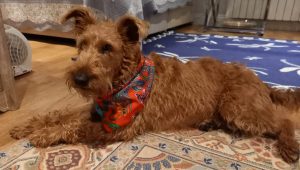 December has flown and alas no newsletter because I was living with a mountain of calendars that are now despatched and the ‘Christmas Decor’ packed away in their boxes. Does anyone else I wonder, have to deal with a vast army of faded veterans – angels with only one wing, reindeer with stumps instead of antlers and baubles in various states of old age? They appear on the Christmas tree each year, a grisly troupe but dearly loved by those who know them. I have banned the twirling clown who lost his head last year and Jamie’s first question was “What’s happened to the clown?”

We gave up on edibles years ago when Miss Bunch and Becky Price had spent we presumed, the whole night on their hind legs hopping round the tree and sucking the sherbet out of the most elaborate and beautiful sweetie bags sent by friends from the Salzburg. The demolition of a whole gingerbread house the following year, was probably the biggest Christmas eating disaster.

The loveliest thing however, this Christmas, has been the little canaries. They absolutely loved the twinkling tree and spent hours with old Biggles flying in and out of the dense branches, perching on the stars and hiding underneath. Now he incidentally, is an excellent acrobat on the new swing – a Christmas present of course, while Primrose and Celandine watch in awe as he rocks to and fro, what a show off! 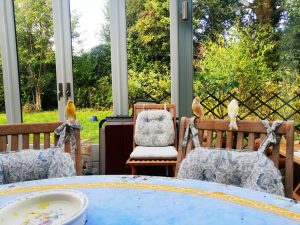 I sometimes wonder why every small creature that comes into my care immediately assumes all the characteristics of our Irish Terriers – they are as wilful, entertaining and affectionate as the dogs – I think they are mini Micks in coats of yellow feathers.

Miss Libbs and Marybell loved having Boo and the family here to stay over Christmas. The best part of course, was a lovely walk along the sea wall on Boxing Day. Their Irish Terrier Margo is a year younger than Marybell and is absolutely charming, she and Marybell ran along the water’s edge and never stopped playing. They also have a miniature dachshund and it amazes me that a tiny dog bred to this awkward shape of short legs and a long back can walk at all, let alone keep up a good pace on a 2 hour walk. He’s a strange little dog, always looks worried about something (no laughing here!) But he loves to be picked up and nursed and I can’t help being fond of him. 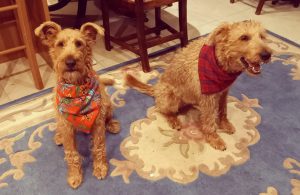 Laura and Imogen did all the cooking and they are super efficient and have cracked or is it cultivated, the mysterious art of keeping things tidy as they go along – not the usual look of a bomb site this year! Poor Libbs and Marybell were heartbroken when they left.

The calendars have flown and it is a relief to have a few more flat surfaces in the house that are not covered in calendars. We have kept some back for Crufts this year and hope it won’t be cancelled again. Thank you for all the kind things you’ve said about it, I think it is uniquely ‘our calendar’ and one friend wrote “I look forward again to being led by the paw through another year by these glorious characters, I love them all”. Joanna Lumley (now Dame Joanna and I have sent our congratulations) wrote such a charming message “A thousand fond thoughts to you and your beloveds and lots of love” How sweet is that? Huge thanks to Debbie, she has a very cool head and plays an important part in the production of the calendar, she is a dream to work with. Thank you again!

One thing I do want to say about this tedious pandemic is that as far as we know, not a single Irish Terrier has been displaced or discomforted in any way at all – thank goodness for that. It seems that the dog rescue centres are still struggling to re-home hundreds of lockdown puppies, the poor little ones.

I had a week in London before Christmas, staying with Brenda and seeing old friends, I do love living in Lymington and it’s perfect dog country, and the sea air is a touch of heaven, but I do miss the pace of London and you can’t help missing old friends. 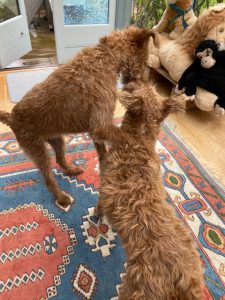 Richard and I took Daisy for a walk in Regent’s Park, it always puts me back in time, I know every tree and all my darling old dogs and their friends come rushing back to greet me. It’s lovely to see Daisy so confident and enjoying being ‘Daisy-growing-up’. She’s so loving and affectionate, I’d say irresistible. Richard says “She behaves badly only when you and Marybell are around” and I say “That’s not bad behaviour, it’s just joyful mischief.” She’s coming to stay next week when Derek and Richard are away, there will be some rioting I’m sure, but Libby will help me keep them in order.

It’s been a beautiful day after all the rain and I have been in the garden putting things to bed – Rory has helped with sweeping up, spending a lot of time playing with Marybell – she persuaded him to push her around in a wheelbarrow. He has a rascal Mick called Troy (except that I keep calling him Trojan) He’s a real charmer but can be a bit of a rogue turning up here and there on his own. He’s adored by the family and has 5 children to amuse him. 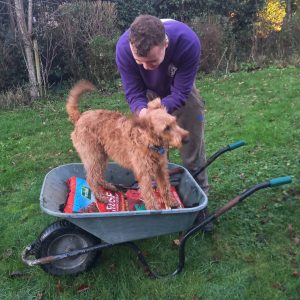 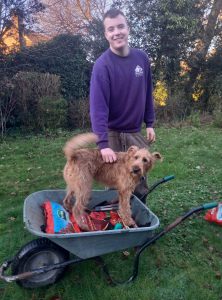 It’s always fun for ‘the girls’ to have ‘someone else’ (my children’s expression) as they do get bored with me. As the old manuscripts say ‘An Irish Terrier is happiest when looking after a goat, a pig and a baby’ – an ongoing party I suspect, well I do aim to please, but fortunately the good burghers of Lymington might object. 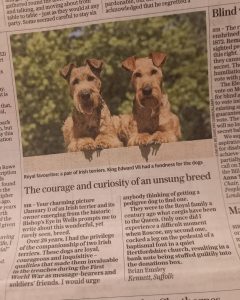 Did anyone see the letter in the Daily Telegraph (Friday January 14th 2022)? – it’s a charming letter – we all recognise the story!
My one disagreement is that they are not unsung – anyone who meets someone with a Mick on the lead and stops to chat, will know in a nano second that we are not just oners, but devotees!

I hope that Christmas and the holidays were fun and send every good wish for 2022.

With kindest regards
and love to the dogs