It has been a beautiful day, ‘so calm so bright’, with the sky that exquisite infinite blue – and not a puff of cloud in sight. My gardening mania has kicked in even earlier than ever this year and I have been on my hands and knees planting out pink and blue primulas amid the little pale yellow primroses. 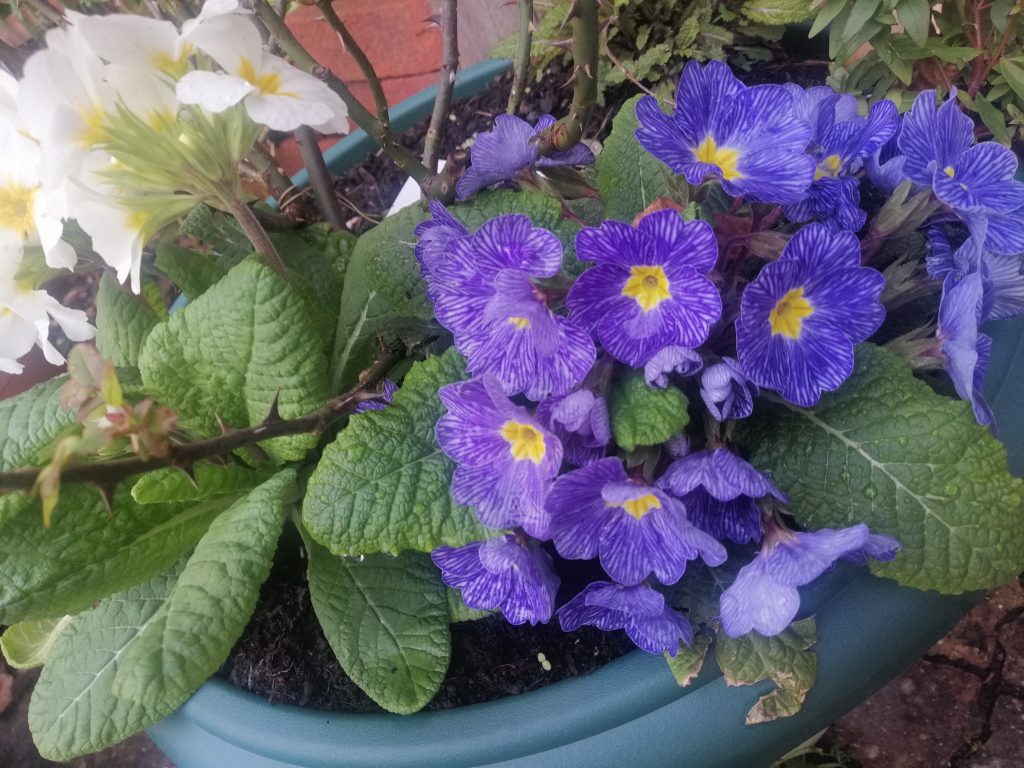 Marybell keeps rocking up with her tennis ball. She’d like me to throw it, but has ‘issues’ (in the current jargon) about giving it up. She was very agitated yesterday when a team of six arrived to blitz the garden – lawn, cutting back the brambles, lopping the odd branch and sweeping up tons of fallen leaves – all very noisy and upsetting – particularly as she had already inspected her ‘shrines’: those half dug holes with offerings of this and that. I think she feared some disrespectful assault or even an act of theft or vandalism.
I quickly pointed out to the gardeners the key flowerbeds involved and to be avoided at all cost. Miss MB soon settled down to enjoy the company.  The tennis ball appeared and a game of throwing it about, Marybell being the pig in the middle. They tugged sticks with her and encouraged her to help dig out the compost heap. They were a jolly lot and she was swinging.

Best of all was that they brought their own sandwiches for lunch and sat around on a tarpaulin on the grass to eat them. Libbs emerged miraculously from the comfort of indoors at exactly the right moment to join the party .  She was all smiles, but suitably diffident as a newcomer.  All part of the charm offensive, of course, and she was met with a shower of titbits. They made a space for her on the tarpaulin and soon discovered her skills as a catcher of sandwiches which were soon flying through the air.
Watching from the kitchen window, I wondered whether they would get any work done at all.  Well, they did, with the girls’ help, and I was left marvelling again at how the Micks can stage a charm offensive to get exactly what they want.

They sat in the front seat of the lorry while it was being loaded up and I had to haul them out. I do believe they would have gone off quite happily – though there might have been some tears at bedtime. 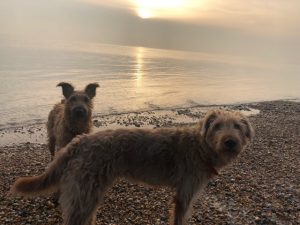 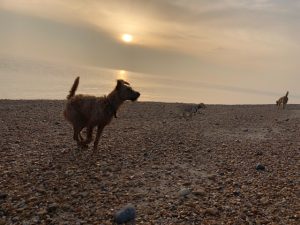 They are both a bit thin at the moment. I think it’s because the little mouse who sat so sweetly in the birdcage with Biggles, brought her friends or babies along too. Libbs was permanently on guard and there were some fearful chases and  little dead mice on the carpet.  It really upset me, but Libbs and Marb were like ‘warrior maidens’ walking on air and fresh from the fight.  But something had to be done.

Terry, the mouse catcher, came. His van had PEST CONTROL stamped on the side and my heart sank. The girls moved into action at once, following him around, lying on the floor beside him as he poked under cupboards and behind bookcases. They seemed to know exactly what he was about, even waiting at the bottom of the steps to the loft squealing softly and wagging their tails. They are terriers, of course, and will hunt anything that runs quite instinctively and Colonel Richardson said of them during the Great War: “As killers of vermin in the trenches, the Micks were unsurpassed”. 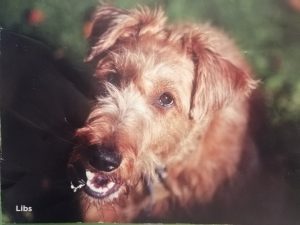 Our darling Liberty Belle is 10 this month.  She is the most angelic ‘senior citizen’ and I can barely remember the little rogue who came with a health warning for me from Ann Bradley: “she’s a live wire and has been a very demanding puppy, even at five weeks old.” Our two old dogs, Zuli and Bega loved her so dearly. She was house trained by them, looked after in the park, and ‘recall’ was never mentioned. They would round her up and frogmarch her back with solemn faces.

Much as we love each other, I know she is Jamie’s girl and I’m just a stand in when he’s away. You all know about her flirtatious dancing. She is shameless, but it’s done to make us all laugh. “Here she comes”, and I start apologising. But I’m really beyond embarrassment.  I sometimes wonder what she’d do if anyone responded. Just keep lighting up the days for us my darling.

I am having a peppery correspondence with someone who wrote two years ago complaining that I wrote about Irish Terriers as if they were English rather than Irish dogs. We sorted that one out, politely of course, but now he is back saying that I’m turning them into ‘soppy love bundles with as much character as stuffed teddy bears’.  He quotes Jack London’s Jerry of the Islands and Jock of the Bushveld as fierce fighting dogs. He reminds us us of the ‘daredevils’ in the Great War and praises their courage, tenacity and loyalty.

Teddy, we lay where we want! 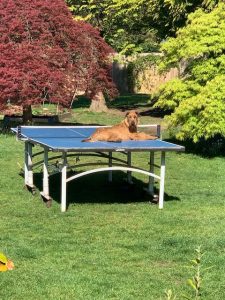 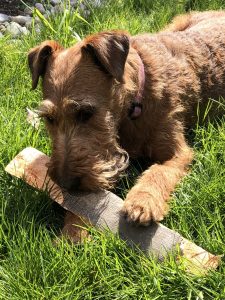 Now – we know all that and I do believe that everyone should be allowed to express a sensible, well argued opinion – but I was a bit stunned. I think it would be interesting to have a discussion and hear your opinions. There have been huge changes in the way we live today and relate to our animals and this is after all a pet website. I have also reminded him of the anxiety and strain of the last year and I did feel that more than anything we needed a gentle collective laugh together. I will write a piece in the next letter about how over a long lifetime I have watched the evolution of the contemporary Irish Terrier. Of course ‘we’ have all changed, quite rightly. It’s a different world. My chief horror is  they might turn into latter day Collies, brainwashed into obedience buffs – that’s just not for me.  So, Mr What’s Your Name, let us have your opinion too. 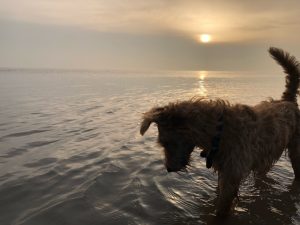 One sweet incident to finish. An elderly neighbour, worried about the virus, flagged us down in the Close. The girls leaned out of the windows, wagging their tails at her. She moved forward with tears welling up and said: “It’s the loveliest thing to know that you’re loved by your neighbour’s dogs.” 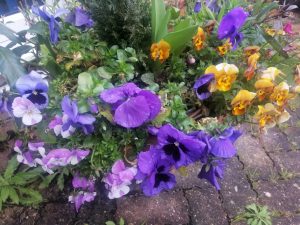 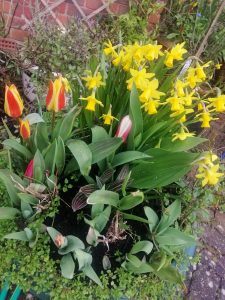 and love to the dogs