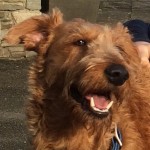 Putting away my 2015 diary last week I noticed that it was the precise date of my calamitous, sideways lunge into that freezing pond on the salt marshes last year. Libby and I pause respectfully at the spot fairly frequently and give each other baleful looks. She knows perfectly well what I’m thinking and watches me carefully. She leaps across the now even more fragile bank and waits for me to follow, but I turn back the way I came – discretion being the better part and all that. What still exercises my mind is why on earth I kept my umbrella dry, holding it aloft whilst the rest of me sank like a ship swinging to starboard and sinking into the mud – how mad was that, or was there some hope of a lift off by parachute? One thing is certain, I do note that it is much warmer this year, which must be an improvement.

I had the great pleasure of lunching with Rosemary Smart, who is the Chief Executive of the Kennel Club, in their new Kennel Club building. Rose is so charming and softly spoken that one has difficulty imagining how she has become such a great mover and shaker in a complex and powerful institution like the Kennel Club. She commands huge respect and what impresses me more than anything else is her genuine and heartfelt love of dogs. She says, “Our real focus is the dogs. They are our clients and our first concern and we never lose sight of that.”

The new building is splendid and allows everyone so much more space and it’s very quiet – almost other world, with pale grey walls and dark blue carpets. There’s masses of room to display the famous collection of pictures. My heart went ‘ping’ whenever I spotted an Irish Terrier. Rose loves the Irish Terrier stories and I suspect remembers them all better than I do. Every dog about whom I’ve ever written lives on vividly in my heart, but the story lines can become a little tangled. I have decided to present Arabella Dorman’s portrait of Libby to the Kennel Club if and when I can bear to part with it. I’ve seen the almost finished picture online as we were choosing a frame – gilt or a brown veneer – and it is stunning. Libbs with one leg tucked up under her chest and doing her usual shimmer, delighted with herself and about to spin off and look for pastures new. As soon as we have it, we’ll ask Arabella to put a print on the website. I love the idea of a contemporary picture of an Irish Terrier. Much as I admire particularly Maud Earl pics painted in the early 1900s, the dogs seem often to be less significant than the landscape. Today, of course, they are far more showy with longer legs and ears set higher on the head. I can’t imagine what old Mile End Muddler solid man and the rest with their flat cap ears would make of the glamour we see in the show ring today and as for the long tails… well?! But the spirit is the same – obedience requires cultivation – charm and repentance provide the ‘let off’ for most misdemeanours and the glorious flame in their eyes burns as brightly as ever.

We’ve been in Devon, Combe Martin in fact, for the annual winter half term with some of our favourite cousins. I was beginning to feel a bit anxious about the long drive, but cousin Frank came to the rescue and suggested leaving the car where they live near Bath and packing us all – Libby plus canaries (in a reduced sized cage) into his car. It did make life easier for me, but I fear that Frank is probably still brushing bird seed out of his car boot.

Libby loves the children, especially Millie, who has a way with animals. She never leaves her side except for the odd dash round with Insey and Biggles, who is the new family Jack Russell pup. Insey, who is ‘mostly’ flat coat, plunges into the freezing cold waves while the two terriers stiffen their legs and lean backwards in an emergency stop at the edge of the water. Biggles did have a wave break over his head, but seemed none the worse for it. We had our usual mammoth walk along Woolacombe Beach and Libby kept running back, barking at us and I knew she was asking, “Where are the footballs?” and my reply was, “They’ve been banned – and you’re a bore and have popped so many.” The children rolled down the sand dunes and their boots filled up with damp sticky sand. Goodness knows, my children were energetic enough and great dog walkers, but this lot can yomp for England. Insey ‘lodged’ with us overnight as we have a dog-friendly room. He and Libby are puppyhood friends and enjoy a bit of rioting given the chance. Insey kept getting up during the night squealing and shaking his knitted blanket at my bedside. I felt I was being propositioned in some strange way, mostly a matter of treats and biscuits I think. He’s a very endearing, beautiful dog, but does cause the occasional anxiety as he will run off chasing deer or some sort of fantasy and seems oblivious to all the hours of training he’s had.

Claire and Eamon came to tea. I did mention last month that their lovely Mick, called Bodhi, had developed a deadly type of hepatitis which they were battling to manage. It seems almost inconceivable that such a lively, happy young dog should be so suddenly struck down. They tried every cure known to man and had hoped to keep him going for a year or two at least with the careful drugs. But sadly he became desperately ill. Claire said it was piteous to watch him try so hard to keep going and absolutely heart-breaking when he tried to welcome the vet, of whom he was very fond. I have such happy memories of him running along Woolacombe Beach with Miss Libbs and the other dogs having the time of their lives. So much sympathy to Claire and Eamon who gave him 4 ½ blissful years. As I have said many times and we must believe that, like Pooh Bear in the Ashdown Forest, somewhere on Woolacombe Beach Bodhi will always be playing.

We were at home for a few days and you’ll never believe this – I’m writing to you waiting at Gatwick for a plane to the Cape Verde Islands and now I’ve arrived and it’s cold overcast and windy. The island is Boa Vista and from the air looked like a flattened sand castle with not a scrap of green anywhere. I’ve already locked myself out of my room – the door banged in the wind with the key left inside. It has required the services of a locksmith and I’m sure they’ve lined me up already as a nightmare guest, who is always calling for extra tea bags. It’s rather like an upmarket Butlins and I think I shall have to avoid the seemingly endless jolly activities. There’s some sort of line dancing this evening – not too challenging perhaps. I keep thinking that this is more Libby’s scene than mine. She’d love the young team of ‘activators’ (not my word). It’s strange I keep making a little ‘space’ for her, that pause which allows her through the door first and time to move away when I bend to put on my shoes. It’s rather like accommodating a small child except that Libby Belle is always on time and not hunting for her school cap or wellie boots!

The holiday proved more fun than I could have imagined. After the first few days the weather improved and the ‘activators’ were very amusing and I really do love prancing about. They do a strange mixture of African, Latin, Michael Jackson street dance and they even persuaded me to have a shot of archery (not good) but I did try. The Cape Verde are Portuguese Islands and far less chaotic than the Gambia. Oh the joy of properly managed animal welfare. The cats are plump and properly fed in a specific place. There are no distressed dogs and no abused donkeys. Compared with the plight of animals elsewhere in Africa, they have well organised lives which was a great relief to me.

Libby and I had a brief morning together before I set off for Crufts. She loves being with Dave and Jeanette, but they said afterwards she was unsettled by the brief reunion and I should have left her with them as they had suggested. I insisted that being unsettled never did anyone any harm and that as Libby’s life was such an ongoing hooley, she could easily take it on the chin. I did, however, receive an unusually animated welcome.

I drove off to Stratford and on to the NEC for 4 days at Crufts. I failed, yet again to see the judging as we were so busy at Discover Dogs.

Now, Jane tells me that this letter is long enough and Crufts will have to wait for next month.

We’re home for the Easter holidays and my gardening mania is coming upon me. We will pray for some sunshine.

The old straw Easter Bunny has been ‘living free’ for the last year as I couldn’t bring myself to pack him away with the painted eggs. He has been ‘duffed up’ by you know who several times but I’ll get out my scissors and trim away the ‘bedraggles’ and he’ll be on parade for Easter Day.

With many greetings and a very Happy Easter Day. Remember – no chocs for the dogs, but give them my love – and an Easter hug.