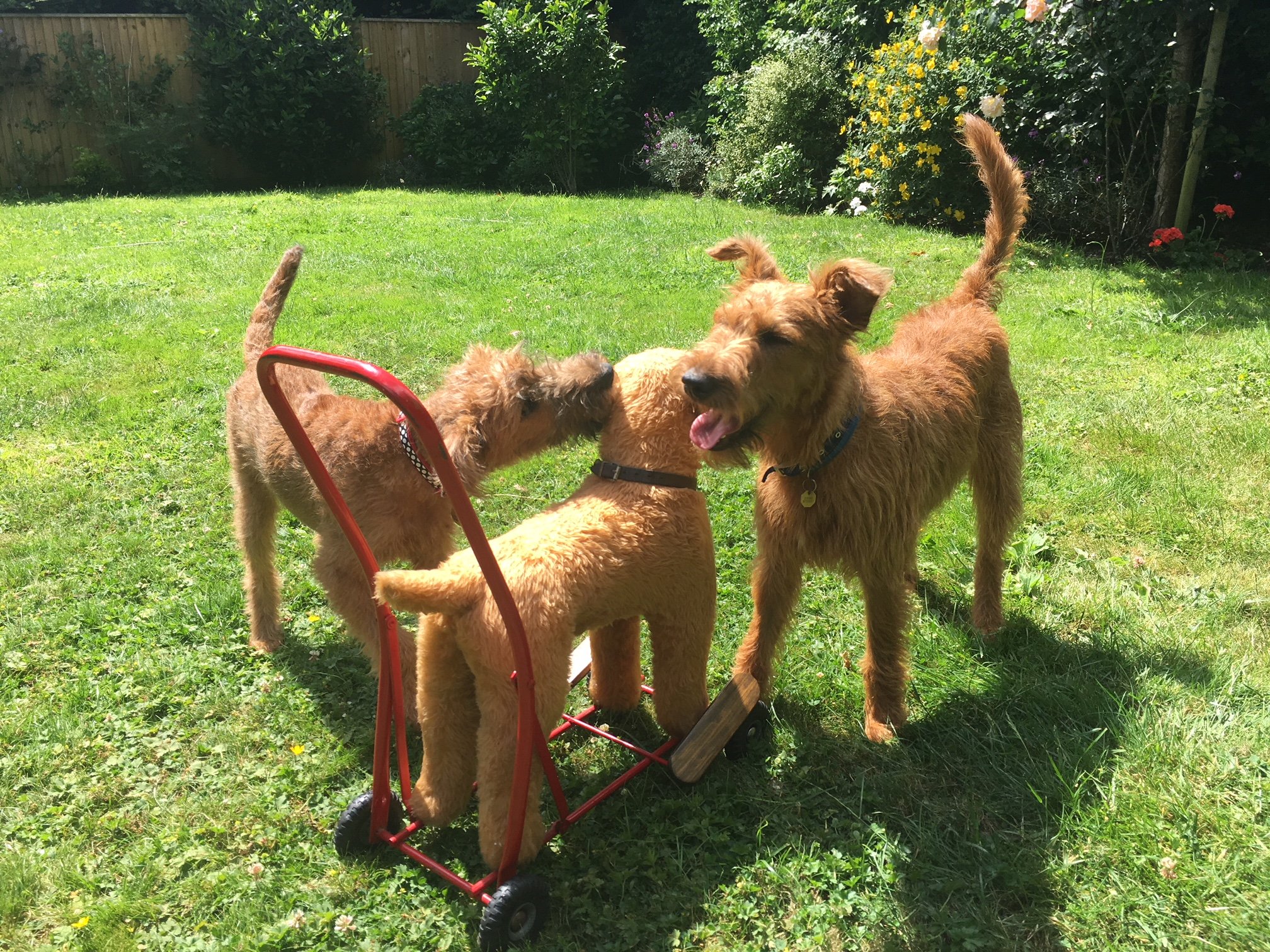 Marybell and Daisy playing with Sarah (who is 59!)

Marybell is a year old, it seems unbelievable, but she’s a fine strong lass and a real good-time girl.

It was a great pleasure to speak to her breeders, Lynn and Alan Summers, on the day and I assured them of MBell’s brilliance and beauty, her takeover of the household, her bred-in-the-bone skill of a thief of all things edible, her charm, her irrepressible high spirits and best of all is that she loves her ‘mama’ most, which is uniquely sweet for me!

I have passionately loved all the family dogs, but have never been the one person they chose to love most. All our dogs seem to have had a family favourite and I’ve been, I think, the ‘safe pair of hands’ who attended to their every whim, made their lives as perfect as possible and saw them through to the end, you might think that sounds like enough, but their ‘special person’ was always someone else – Bryony always adored Ian, Miss Bunch loved Boo, Libbs loves Jamie, Beegie worshipped Imogen and so on… Span, the cross bred Spaniel/Labrador, who came to lodge for six weeks and stayed for sixteen years, was the nearest thing to complete devotion I ever encountered. When he was very old, he refused to be left alone. I carried him upstairs every evening and down in the morning. He’d howl if I loitered or if there was a pause before opening the door to let him in from the garden. He sat at my knee for years and years ‘Is this the price of devotion?’ I would wonder.

But Marybell is different, probably, as everyone points out, because I’m the only one left in the house now – oh well! She’s very affectionate and sometimes I feel like one of Catherine the Great’s ‘Ticklers’ constantly stroking her ears, but she is such a dear girl and has the wonderful Irish Terrier love of life.

She and Libby are great friends and seldom stop tussling and playing together, but when Derek and Richard dropped off their pup, Daisy, to spend a few days while they were away, the dynamic changed. Daisy, like Marybell, moved in seamlessly – she seemed pre-planned with every trick in the book. Just seemed to know it all! The puppies played together locked into some sort of puppy heaven and poor, darling Libbs sat on the side ‘watching the show’ – she tried out a few little games, throwing up the ‘chuckling ball’ and rolling about with it, but the puppies romped on and took no notice at all. By the second day she was desperate and I watched as she stood downcast in the conservatory looking out at the puppies on the lawn. She gave a sudden leap and a twirl on a sixpence, yelping loudly – several more spins and she shot out through the doors, charging past the pups and tearing around the rose beds. Well of course, who could resist such an invitation to chase, now they tore after her, around and around and have ‘allowed’ her to play with them ever since. Just whenever it takes her fancy. 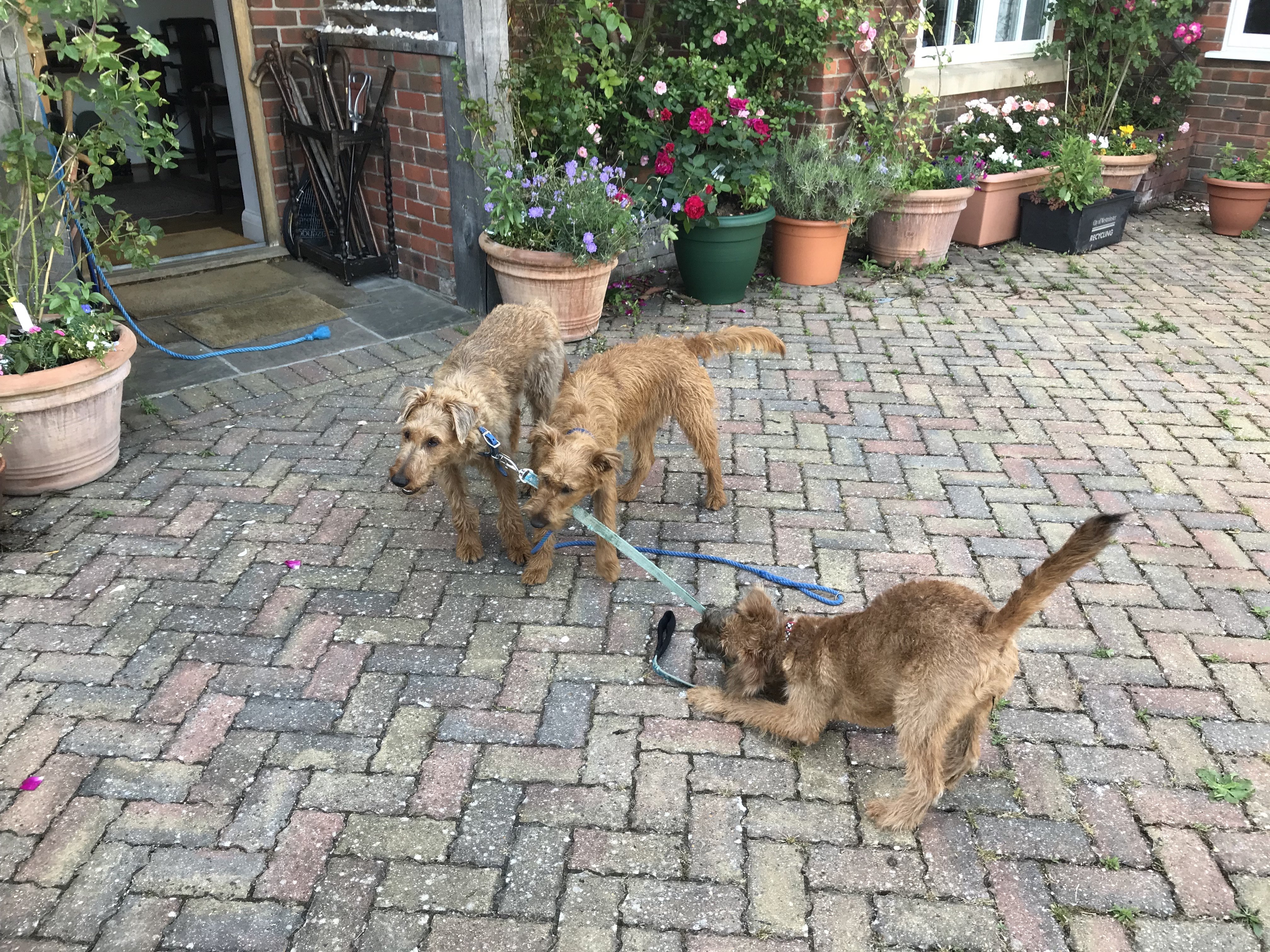 Daisy is that small piece of heaven, she’s all that a baby Mick should be and has already gathered a coterie of devotees, indeed as Bella had done before her. They have all met up with some friends who had recently lost their own beloved Daisy and she spends time with them (they’re almost neighbours) so happily, even chatting up the cat.

Marybell was spayed just before her birthday and I was a nervous wreck. It was much easier in London as we walked to the vet and everything seemed familiar. In Lymington all the operations are done in a splendid animal hospital forty minutes’ drive away, and that’s if you know where you’re going! We drove through a herd of cows, all coming out from first milking, straight into Beaulieu High Street and happily holding up the traffic. This was followed by donkeys – Marybell loved it and bounced about barking loudly. I’m relieved to say that we both survived the ordeal and Marybell never missed a beat. Daisy was still with us and it was difficult to keep her quiet, but it gave Libbs a chance to enjoy the puppy.

We had a great sadness in Lymington when dear little Juno died giving birth to a litter of eight puppies. She had managed so well two years ago, producing five beautiful puppies who all live close to home and are charming dogs. No one seems to understand what on earth went wrong this time and I have been too distraught and tearful to ring up and ask questions. Juno was so dearly loved by everyone who ever met her, I doubt whether I’ve ever seen so many people in tears, Cat and Louise, who walked her, were inconsolable and so far none of us really understands how this came about. There are five children in the family and cats, kittens and guinea pigs seem to come and go. I know that Juno was greatly loved, but having seen the care and expertise in managing the bitches in the kennels, one wonders whether, in Juno’s case, anyone had in focus the things that might go wrong. Now Irish Terriers are sensible and hardy and should whelp easily, but it’s not always entirely up to mother nature. Perhaps there’s a lesson here for us all. Six puppies have survived and it seems are doing well. Hand-rearing tiny pups is no small feat and comforting heart-broken children must have been a nightmare. We do send them every sympathy. 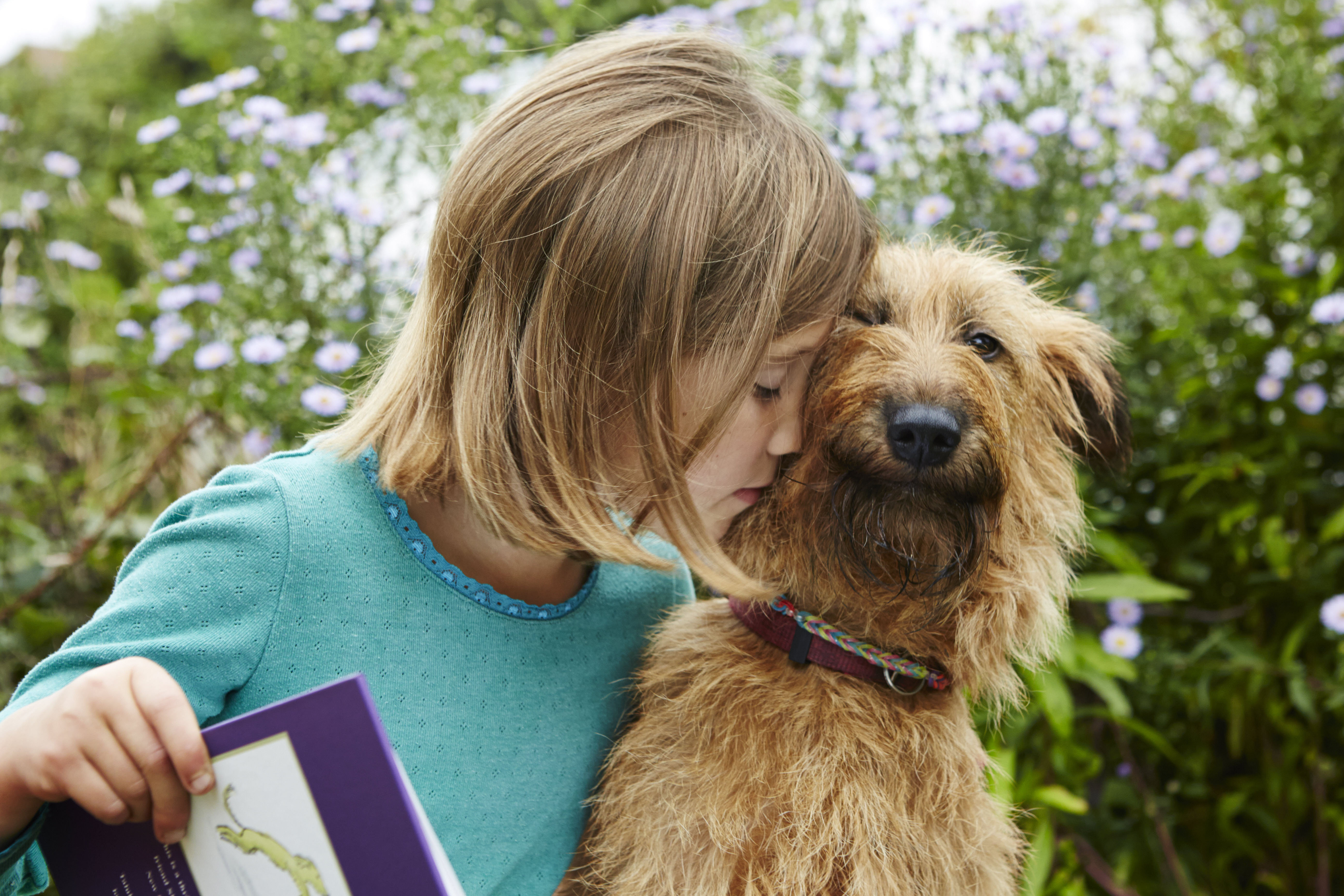 We had a lovely day with Lisa Kopper and Alice who wishes us all a ‘Happy New Year’ in the 2018 calendar. Lisa has had dogs for most of her life, but confesses that none has had such a hold on her heart strings as Alice. I just laugh and say ‘well – I did warn you…’ Now Lisa is a wonderful artist and illustrator and her series of ‘Daisy’ (who was a Bull Terrier) books are enchanting. I’m hoping for a series featuring our best beloveds. 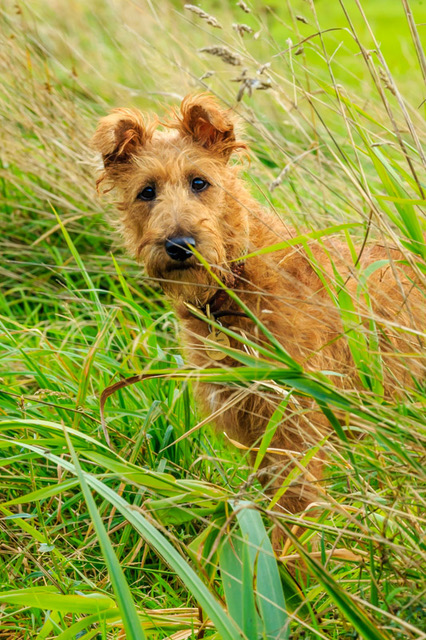 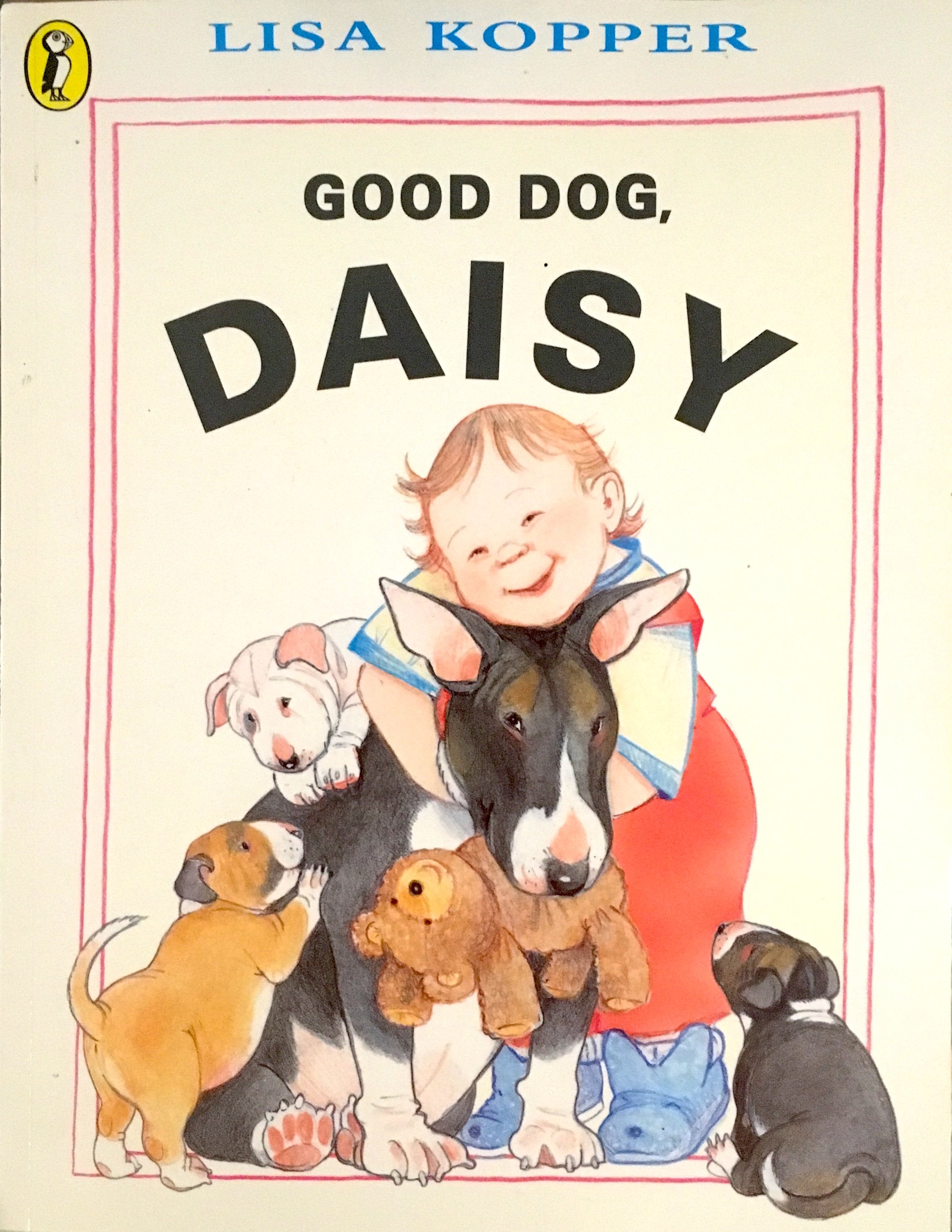 Libbs and MaryB are great hostesses and I was very touched to see Libby welcoming an old friend who came down for the day – Jo had recently lost her dear Labrador, Whistler, and Libbs was so sweetly attentive that I’m sure she knew. She gave her a huge welcome at the station and looked after her all day even sharing her sunbed.

Talking of the sun – dear heaven – hot spots of heat this summer have been alarming. I have been in Scotland, however, where the chilly winds blew, following my son, Julian’s, Big Blind Walk from Land’s End to John O’Groats. I left Les Girls at home (in safe hands) and flew to Inverness. staying with some dear friends and we had a few jolly days tripping around Dunrobin Castle where the display of falconry had me gripping the sides of my chair… On to the Castle of Mey, which brought the Queen Mother back in our memories. Scotland has its own special beauty, very different from England. I never imagined I’d ever see John O’Groats (what was it anyway?) and did find the anxiety of following the walk for seven weeks – a thousand miles – almost overwhelming. Boo (Julian) finished with ‘a band brothers’ – soldiers from Sterling who joined the walk and swept up to ‘the post’ at the end of the mainland – John O’G at last! 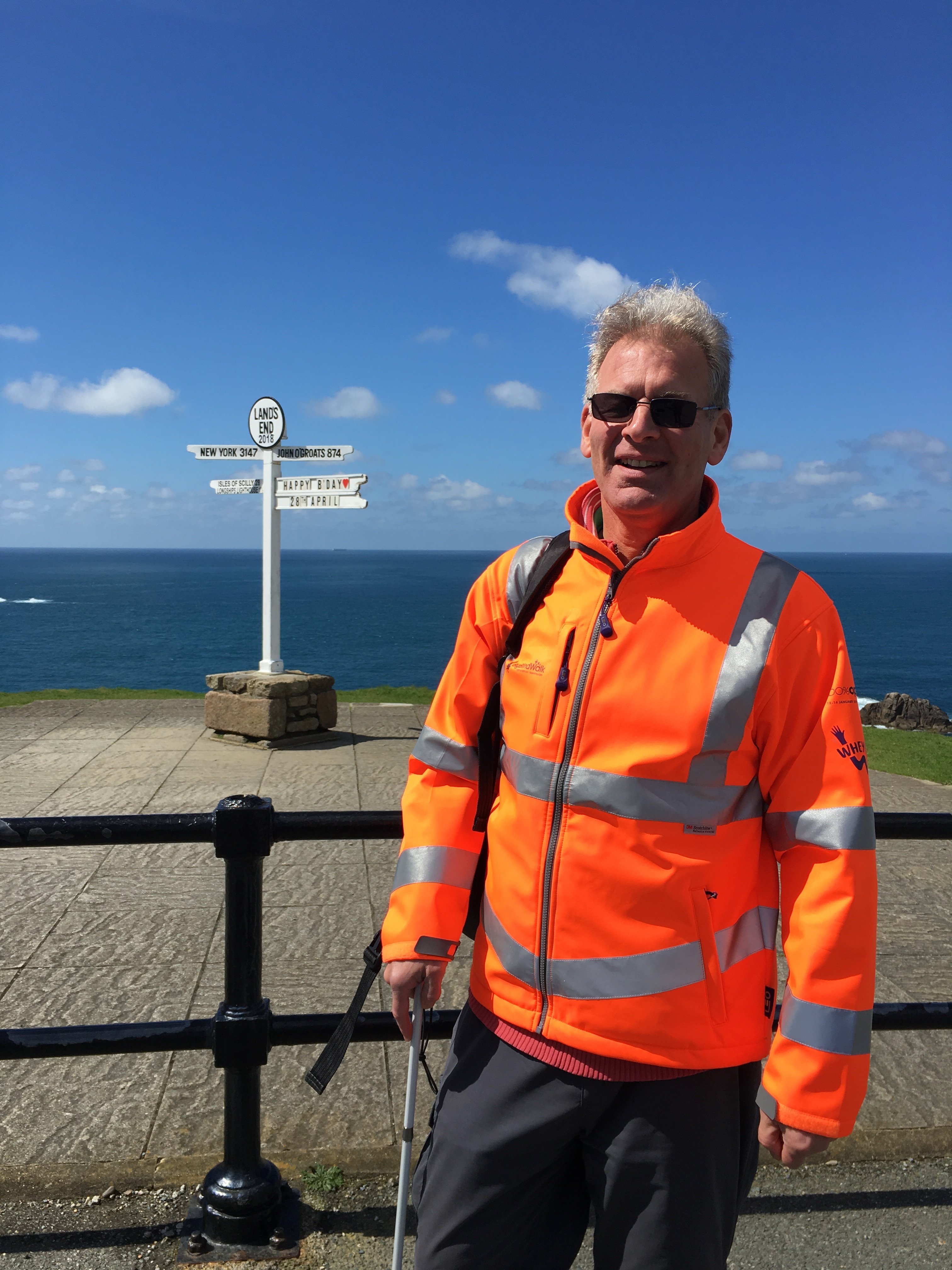 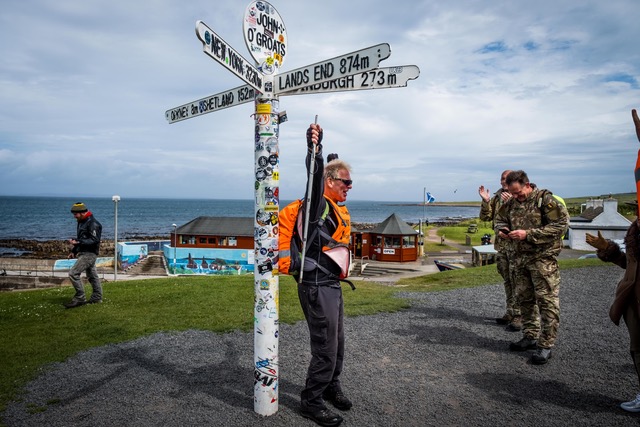 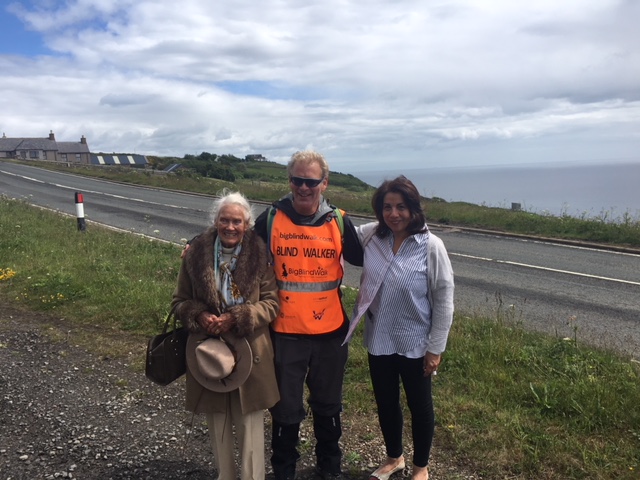 My admiration and respect for everyone involved is immense, but it was a very emotional and rather unnerving experience and Boo, if you are listening, please don’t do it again!

Adele, who is the keeper of our website, is running a half-marathon raising funds for the walk, (thank heavens it’s only a morning!) please follow her link here:

Jamie has been down for the weekend and I’ve been rather tired after the Scottish trip and we’re here quietly at home with Libbs and Marybell. We walked across the dried out salt marshes this evening with the fierce heat of the day fading with the sun. The skies turned to pink and I can scarcely ever remember an evening of such exquisite calm – The Solent was as smooth as glass.

Oh yes! I nearly forgot to say, that Marybell can swim like a seal, a new acquisition! Cousin Elizabeth and Sandy came to stay with Alfie, their dog. He led her out into Hatchett Pond where she apparently found herself afloat and is now an ardent participator/participant in all things aquatic. Jamie says ‘you’re not sitting on my lap in the car’ and she’s banished into the boot. 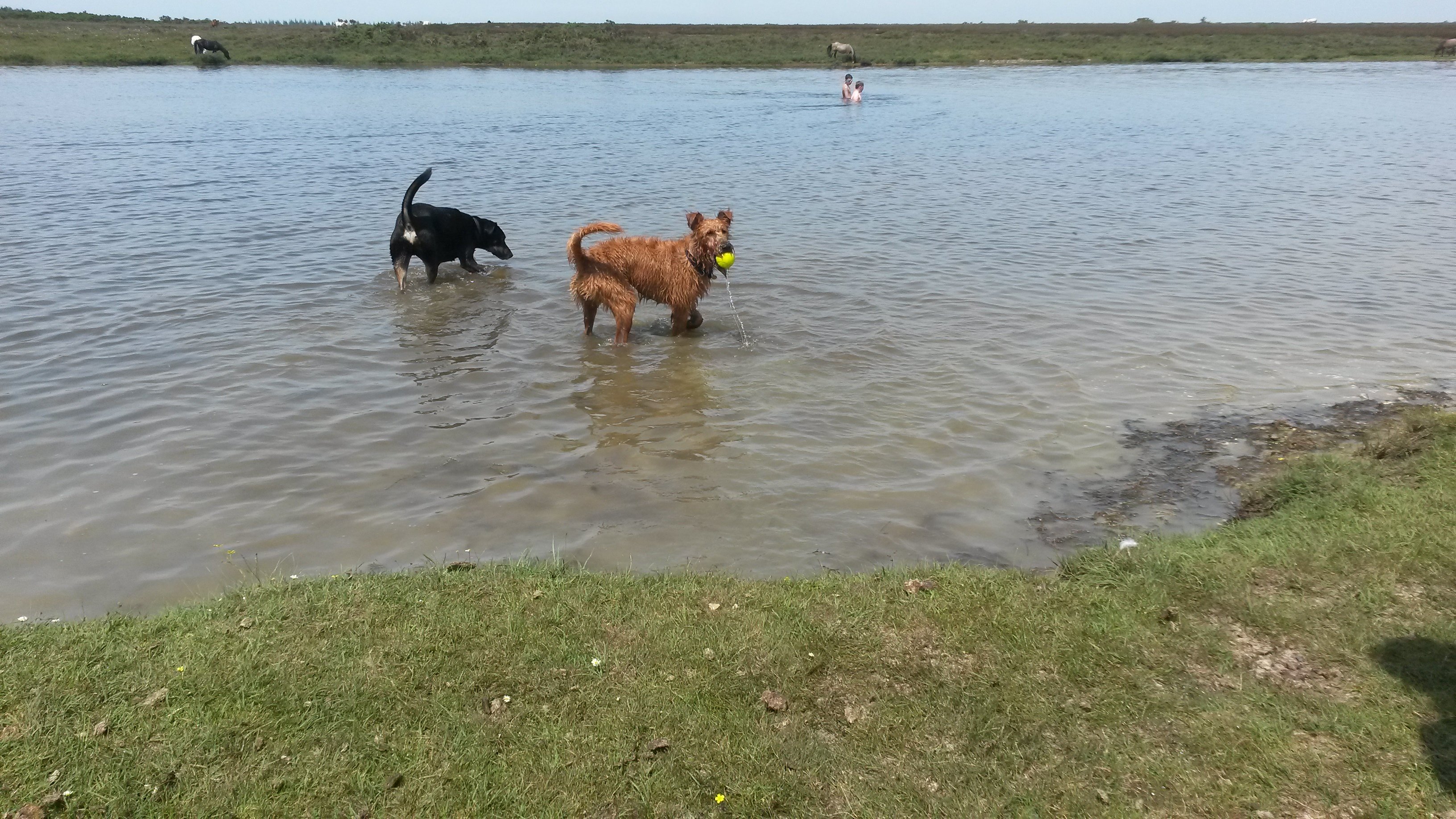 and love to the dogs,