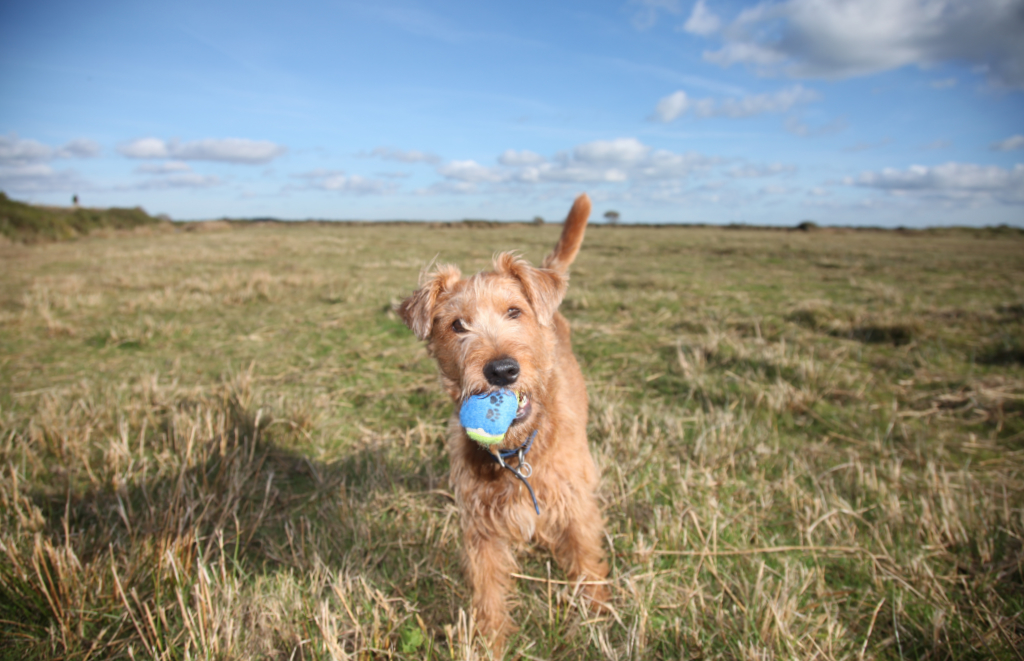 We’ve had a busy month – the girls and I – with a great many of our favourite friends coming to stay. The welcome they receive is always ecstatic, but the gloom which descends when they pack to leave is becoming like a piece of set choreography resembling the Wailing Chorus of a Greek Tragedy. It all starts with anxious fussing when the beds are turned back and the bags brought downstairs. The packing of every item will have been inspected and the whole procedure carefully supervised. Then comes the dash to climb into their car – Mary Bell behind the wheel and Miss Libbs cosied down on the back seat pretending to be invisible.Tussles follow and strenuous efforts to remove them bodily. Libby then, with tail and ears drooping, takes up her post at the front door, a picture of misery. Mary Bell leaps and squeals at the gate ‘Take me with you, please!’

What a performance. I wonder whether they’re simply trying to make me feel inadequate, especially as once the car has disappeared they click back into their usual cheery pursuit of all that pleases. No sign of a tear, not even a backward glance, moving on as they say and probably all forgotten.

Ann Bradley came down for the Southampton Show. Liberty Belle still absolutely adores her. We call her ‘Libby’s birth mother’ and I always remind her that she warned me that Libbs was a very demanding puppy, even at five weeks, which still makes us laugh. Libbs is, in fact, the kindest, easiest girl in the world. Perhaps six years as an only child, brought up by her great-grandmother, has provided few challenges and not many provocations.

Ann asked whether I would ‘allow a mating’ to take place in the garden,’ it would save another journey’, she said. ‘Oh heavens,’ I thought, not quite my thing and bound to contravene some Lymington bylaw. We’re very fastidious here, no washing to be seen in the gardens let alone – umm – dogs – perish the thought! ‘Well I’ll take my dogs out for a walk if you don’t mind’ I said rather primly, which did make Ann laugh. Two charming guys arrived early with their equally charming bitches. We sat in the garden as Ann was late, caught in dreadful traffic. I did warn them that Ann would say immediately say that both girls were somewhat overweight, ‘Oh no!’ they cried ‘We’re hoping to have both done for the price of one, they’re both on heat!’ ‘Well you’d better forget that one,’ I said. Then Ann arrived and Libbs shrieked and leaped about and Mary Bell, without a moment’s hesitation about who this person might be, joined the celebrations.

I have an enormous admiration for Ann. She is the most wonderful ‘doggy’ person, with quiet hands, which put every dog at ease. Even when judging in the Show Ring, they respond with a little tail wag – it’s that magic touch. Her own dogs, including Libbs, never, ever forget her. She had the whole Montelle Team (she refers to them as ‘the kids’) in her car, quietly relaxed after a long day and then Ann let them out, one by one, to show off their paces and run around in the garden. ‘Oh God, I see what you mean, they’re all so perfect, so beautiful,’ whispered the fathers of the brides. ‘Yes, I know’ I whispered back, ‘but don’t fret, we’re not perfect either.’

In the event tests revealed that it was too late anyway! There followed an ‘earful’ from Ann on the need for a slim down – so we’ll watch this space, but it was a larky and very amusing afternoon.

My first granddaughter, Harriet, has turned thirty, in spite of my incredulity, as I do find it hard to believe. We joined a tea party with The Manners, and what I did not realise was that it would be the last goodbye to our darling Nonnie. She was fifteen, she was getting very thin and a bit unsteady on her hind legs, but she rose to the occasion, was thrilled to see us, and came out to join the cricket in the garden. She and I communed gently through the afternoon. Now she and Tessie were litter sisters, but very different characters. She was a great love of mine and very dear to us all. She remained particularly devoted to Harriet and Kate, there have been bitter tears, but it was her time. For us it is the end of an era. 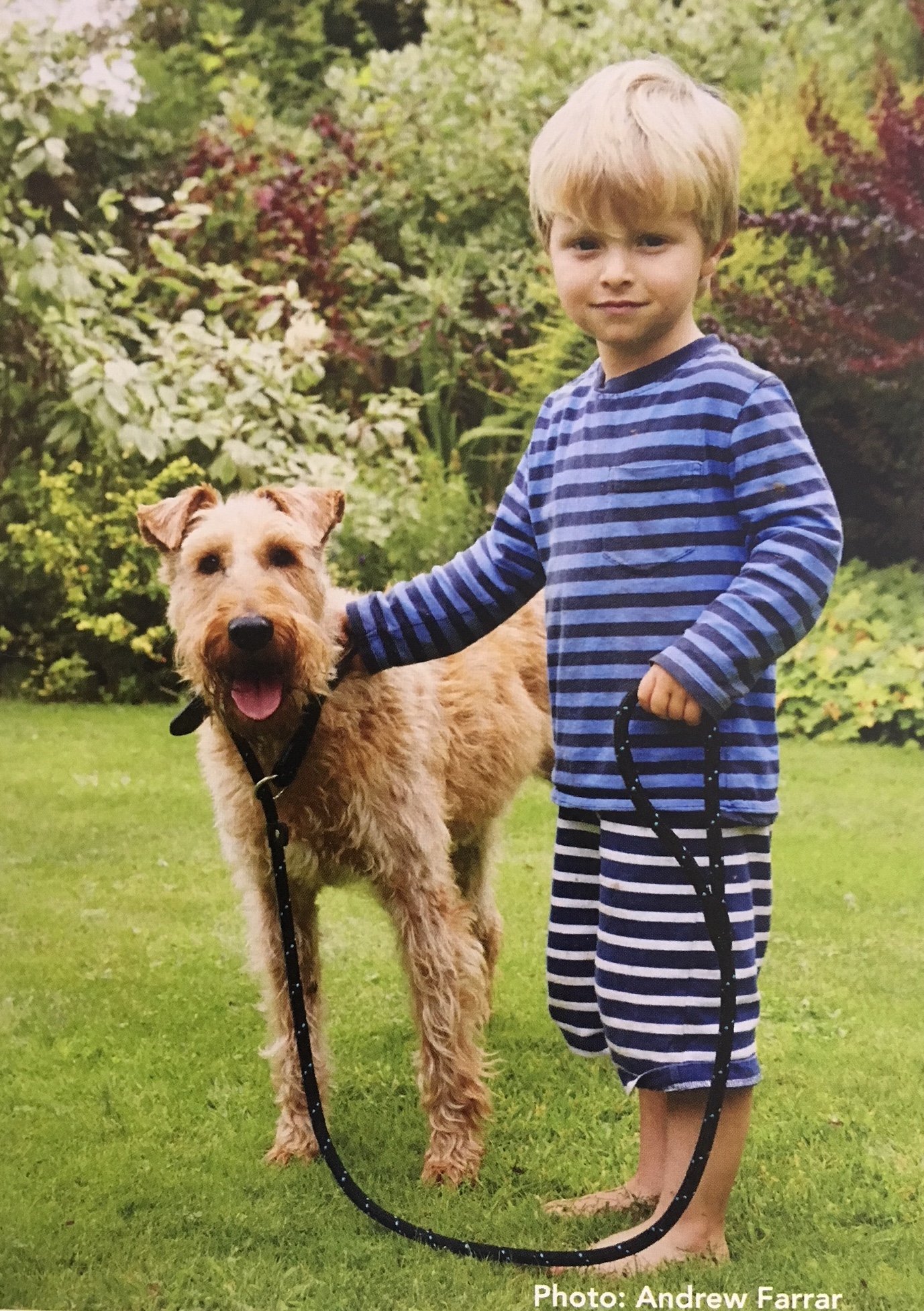 This was the piece that I wrote for her when she was her most rumbustious – bless her. 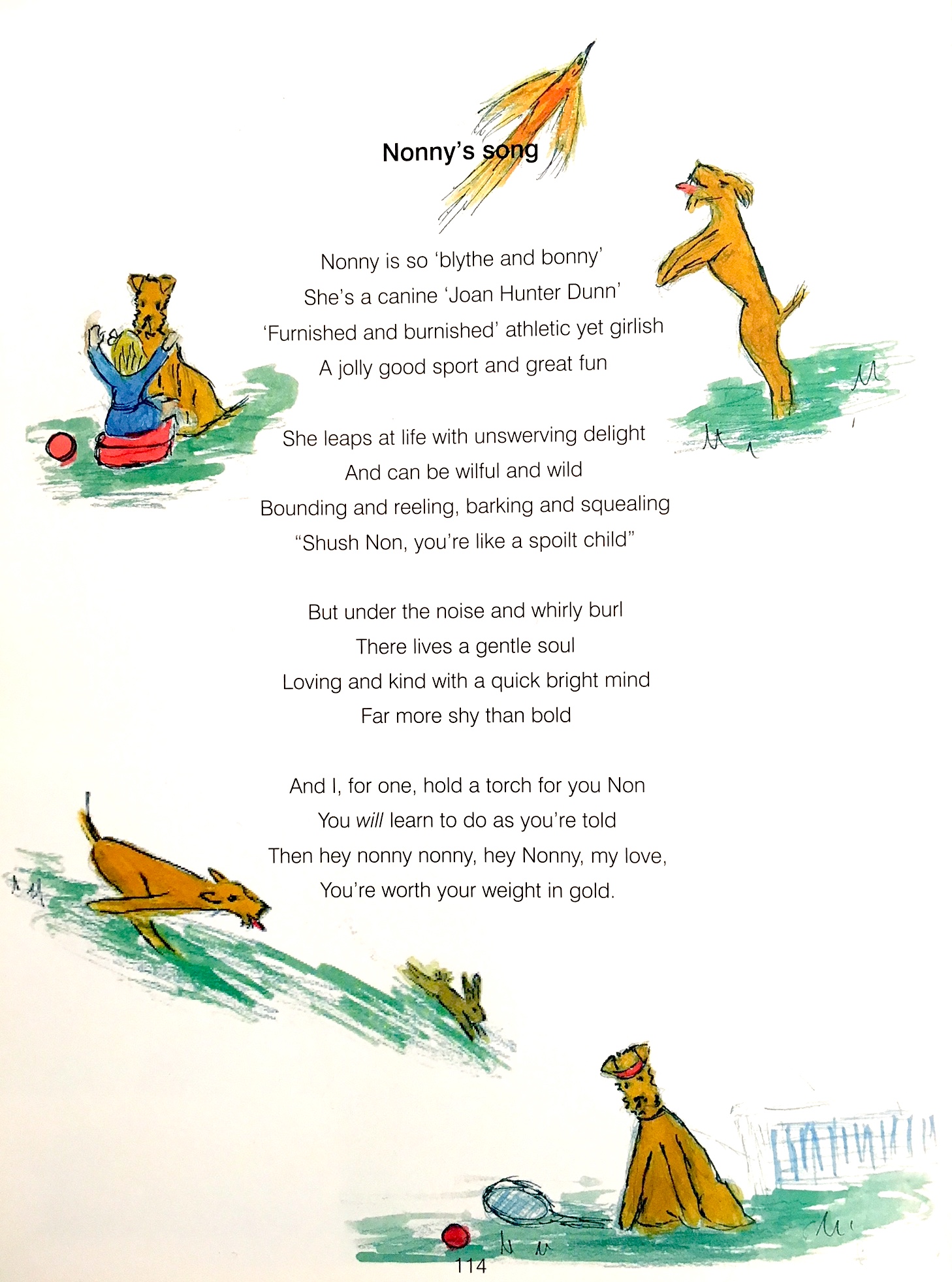 We were in London for a few days – teeth and eye checks for me and a social whirl for Libbs and Mary B. Derek and Richard brought Daisy to tea in Brenda’s wonderful garden – amazing to have a London garden where you can actually have a proper walkabout. The pups flew to greet one another and the rioting began in an instant. 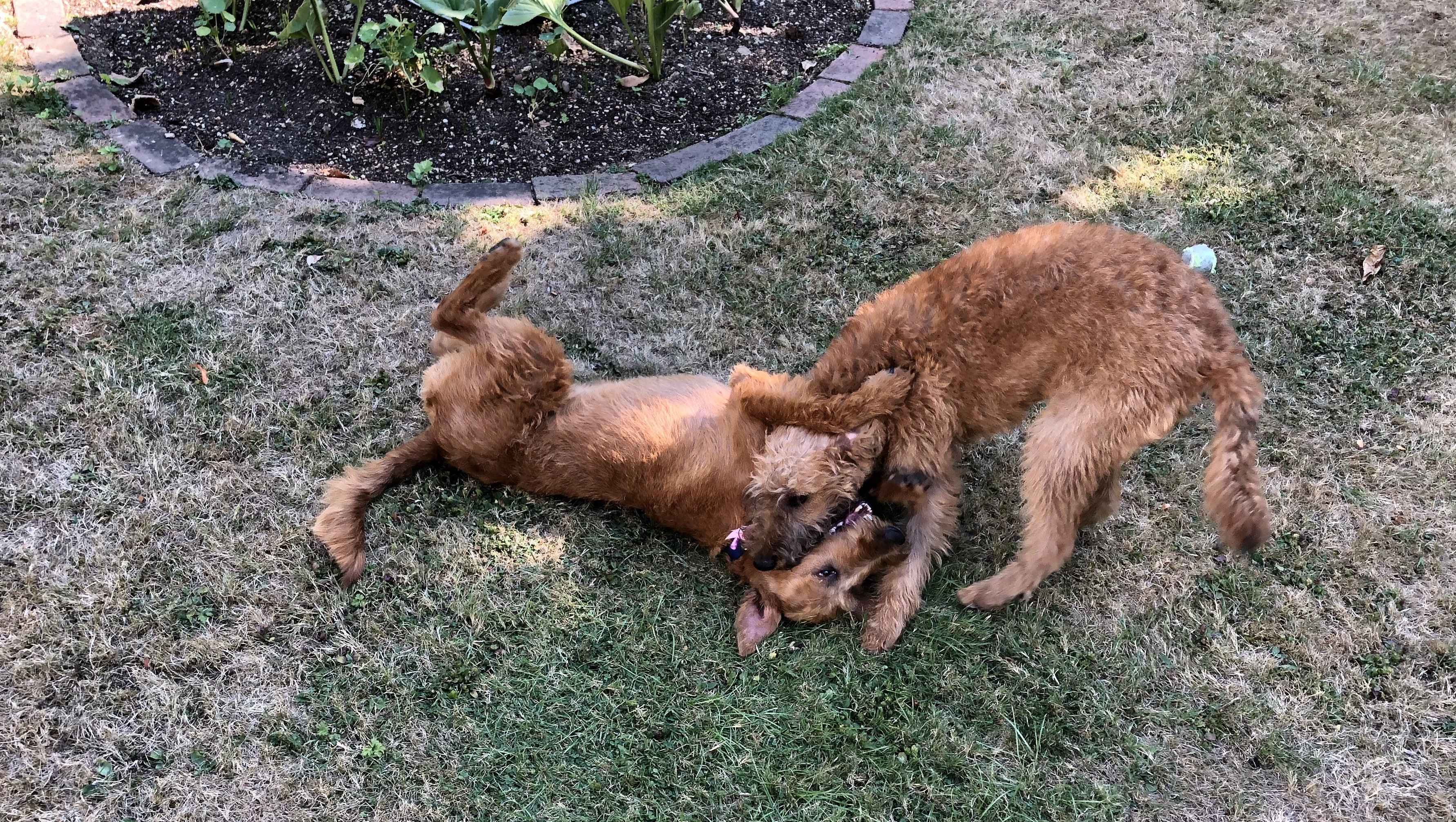 Poor Libbs was, as usual, ignored. But I did suggest to her that she might ‘go and play with the babies’ and, to our surprise, she took off at once and led a great chase. I noticed that Daisy is already almost as swift as Mary Bell and Libbs, of course, runs like lightning, provided there are not too many quick twists and turns – she’s the mistress of the straight line sprint!

Cousin Malcolm brought his two daughters and two of their friends to stay. Like all Irish Terriers, these two were bewitched by the children and had two blissfully enchanted days following them around. I love having children here – they always make me laugh. ‘Do you recycle here?’ asked Anna ‘Do you know, we three were all born on the very same day – there’s just two minutes between each one of us, except for Jess, she’s only eight and, of course, we’re ten.’ ‘Ah – so there!’

Malcolm was in the marines and once a marine, the habits remain and it is a joy to watch him managing the little band. There’s a lot of fun and no arguments and it seemed to rub off on my unruly pair. They were so attentive and gentle with the children, such a sweet, happy, love story. 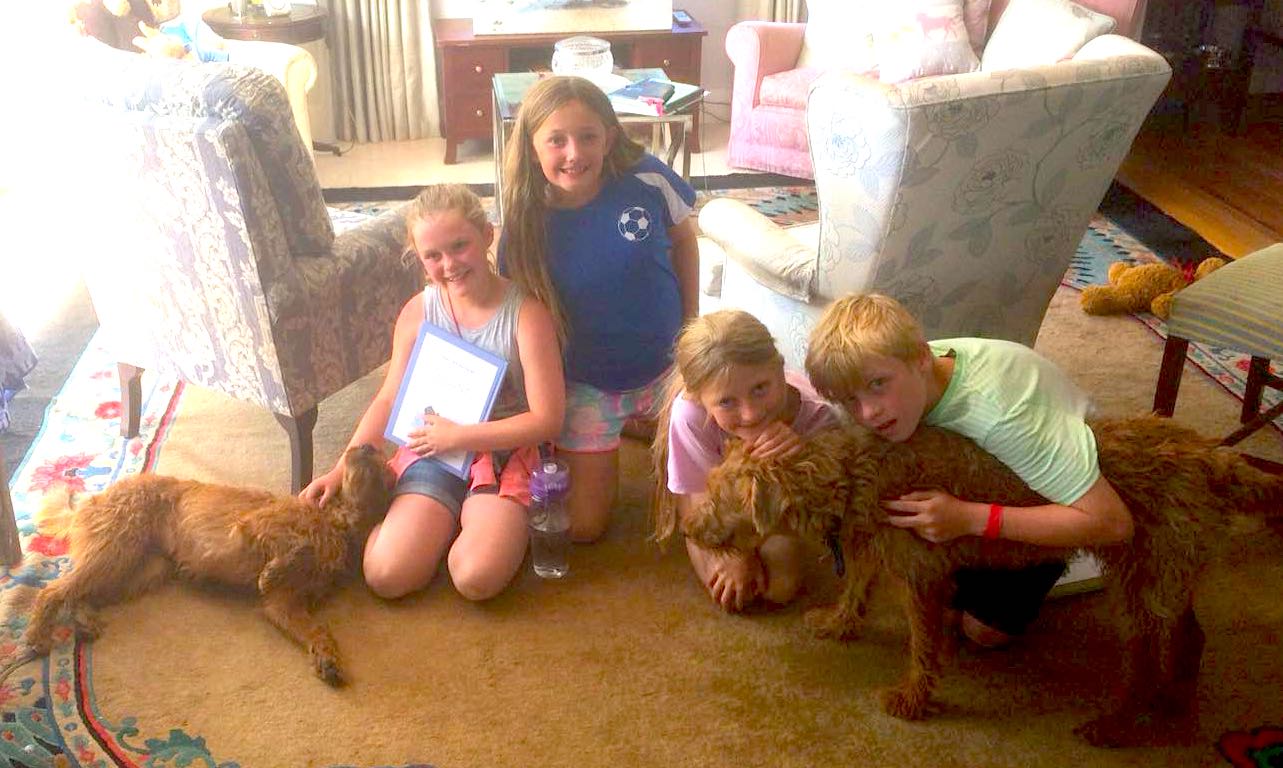 Tom and Charlie Dore called in on the way home from the Music Festival on the Isle of Wight, it was a huge and enjoyable privilege to have Charlie take out her ukulele and sing for me the beautiful piece she wrote for their beloved Woody – ‘He’s a dog out looking for his day’ – a rare and wonderful treat. It is now on our website for everyone to enjoy. 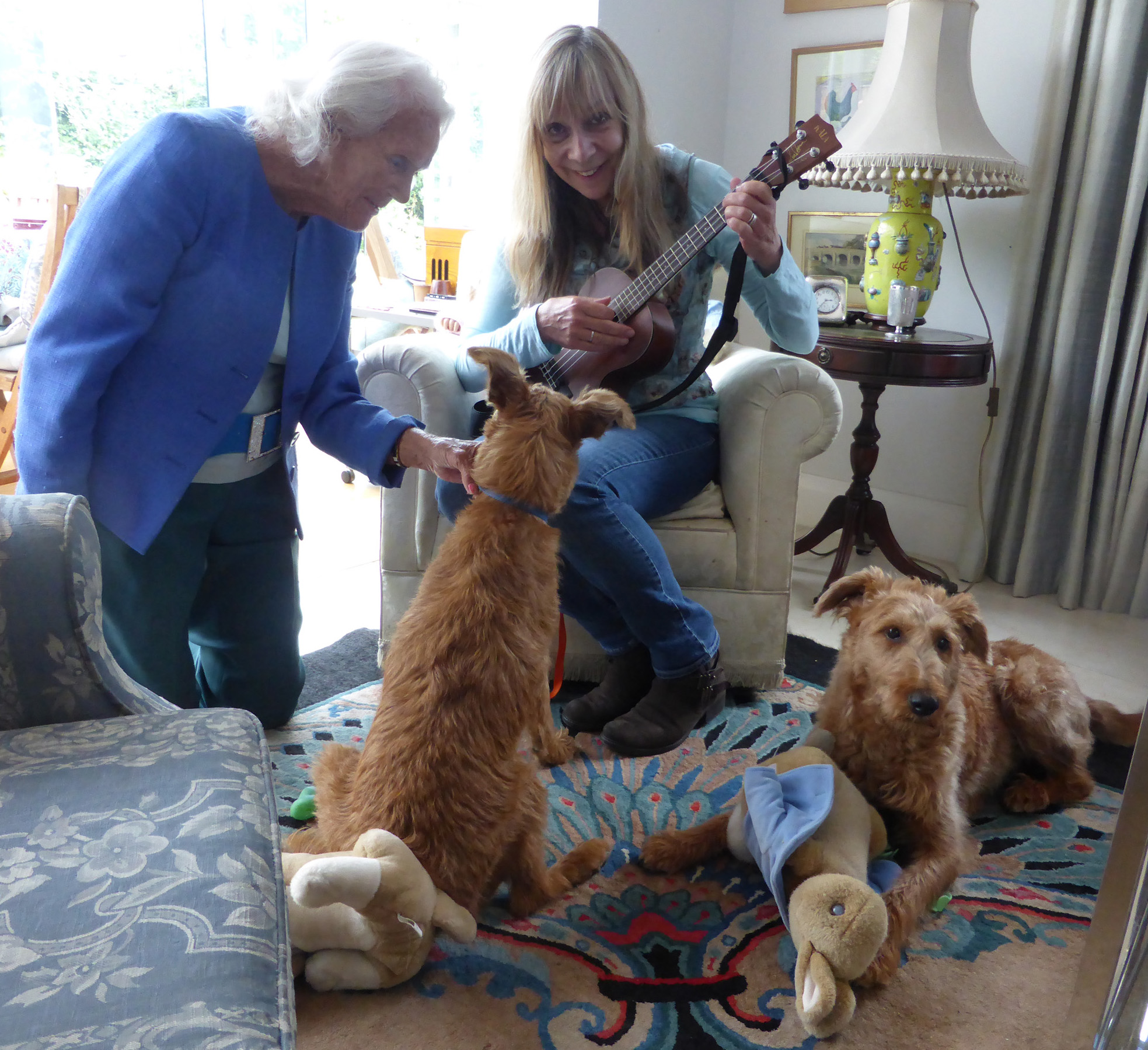 She’s a marvellous musician and ‘we talked music’ until the early hours. Libby and Mary Bell sleep at our feet. In the morning however they were bombed in their beds by two over-excited girls, who’d been on watch outside their bedroom door since daybreak. And then came the sad farewells, which I do think, like the ongoing mouse-hunting, is a stunt put out for general amusement.

I do hope the summer is proving to be a happy time. Imogen and I had a great ‘swimming and sun bake’ in France. Boo joined us and it was lovely to see him so relaxed and well after The Big Blind Walk. He seems to have recovered remarkably quickly.

And the greatest news of all is that they have a new baby, Margot (an Irish Terrier pup of course) and she has already taken over their lives and helped to heal the sadness of losing Tess.

I haven’t met her yet, but hear she’s ‘a right little pickle’ – so what’s new?