While we fret about ‘the virus’ , the lock-up (or is it ‘down), being stifled by face masks and dreams of lost holidays, ‘that busy olde foole unruly sun’ has turned in his tracks and is legging it for the south.  We are left to watch the days shortening and the nip in the air becoming ever more insistent.

But the sea asters are out and have scattered themselves in swathes of pale lilac across the marshes.  What could be more lovely, but sadly we know it is the last gasp of summer. 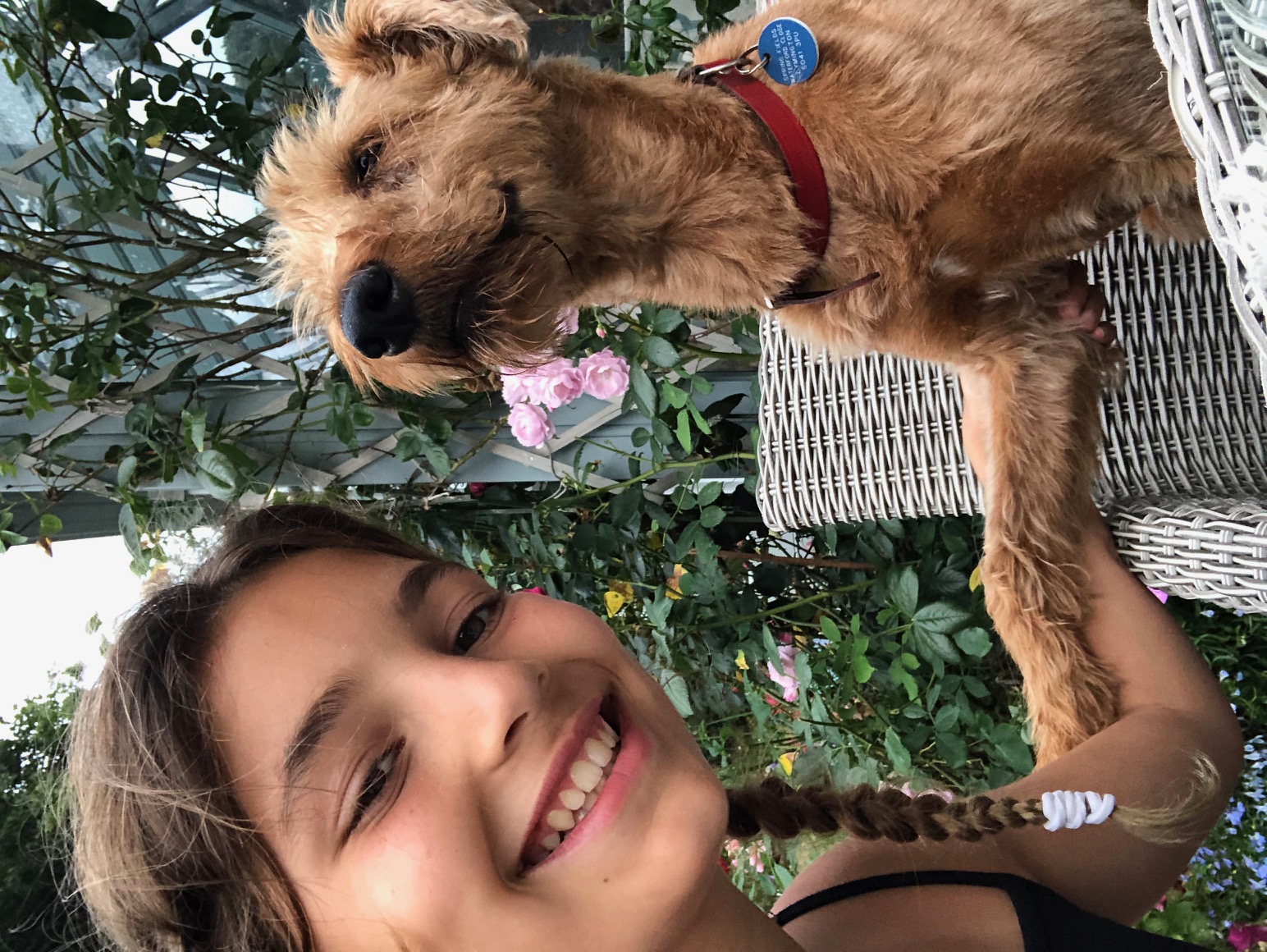 Libbs, Maryb and I have had a mini social whirl in August, with friends and family coming to stay which cheers us up and the days rush by.  Strong winds, rain and storm leave us unperturbed, even when the entire electricity system for Lymington failed for several hours on two consecutive days  – candles and matches were at the ready.  The real nuisance however is that every piece of kitchen equipment is ruled by some ghostly computer, which after eight years is still an enigma to me.  It was completely jinxed for days.

All I want is an on/off switch, I groan.  Thank heavens for my trusty kettle and toaster, both given to me by anxious friends who couldn’t cope with their decrepitude. But now a little touch of chic.  We have some new garden furniture- pale grey wicker table with glass top, six dinky chairs with cushions and a smart umbrella. 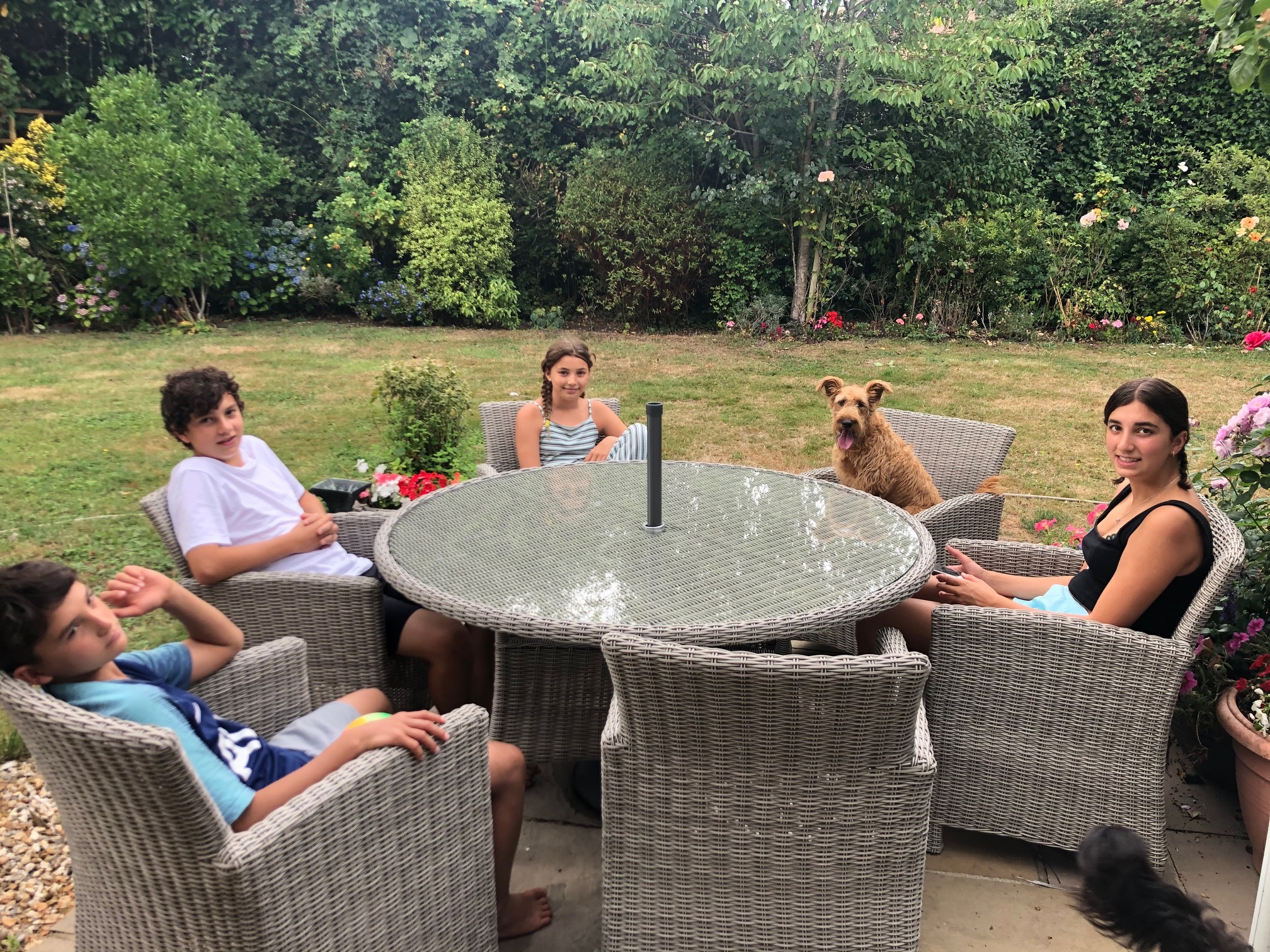 Some of the cousins from Bath were here when it arrived and very kindly and efficiently organised the unpacking.  Marybell was keen to help and tried out each chair as it emerged from its wraps.  There was another test run when the cushions appeared and each chair was checked for any small discomforts.  No faults were uncovered and they have already become favourite vantage points from which to keep tabs on any intruders (by definition, anything that moves) who might come trespassing.

When they see me heading out with the teapot, they rush to claim their places and are not pleased to be dislodged.  It is disappointing that this last week has been so wet that the the favourite lookout post has been swathed in its winter wetsuit.

They had a lovely day on the beach with the children at Keyhaven – a picnic lunch and endless play on the sands. 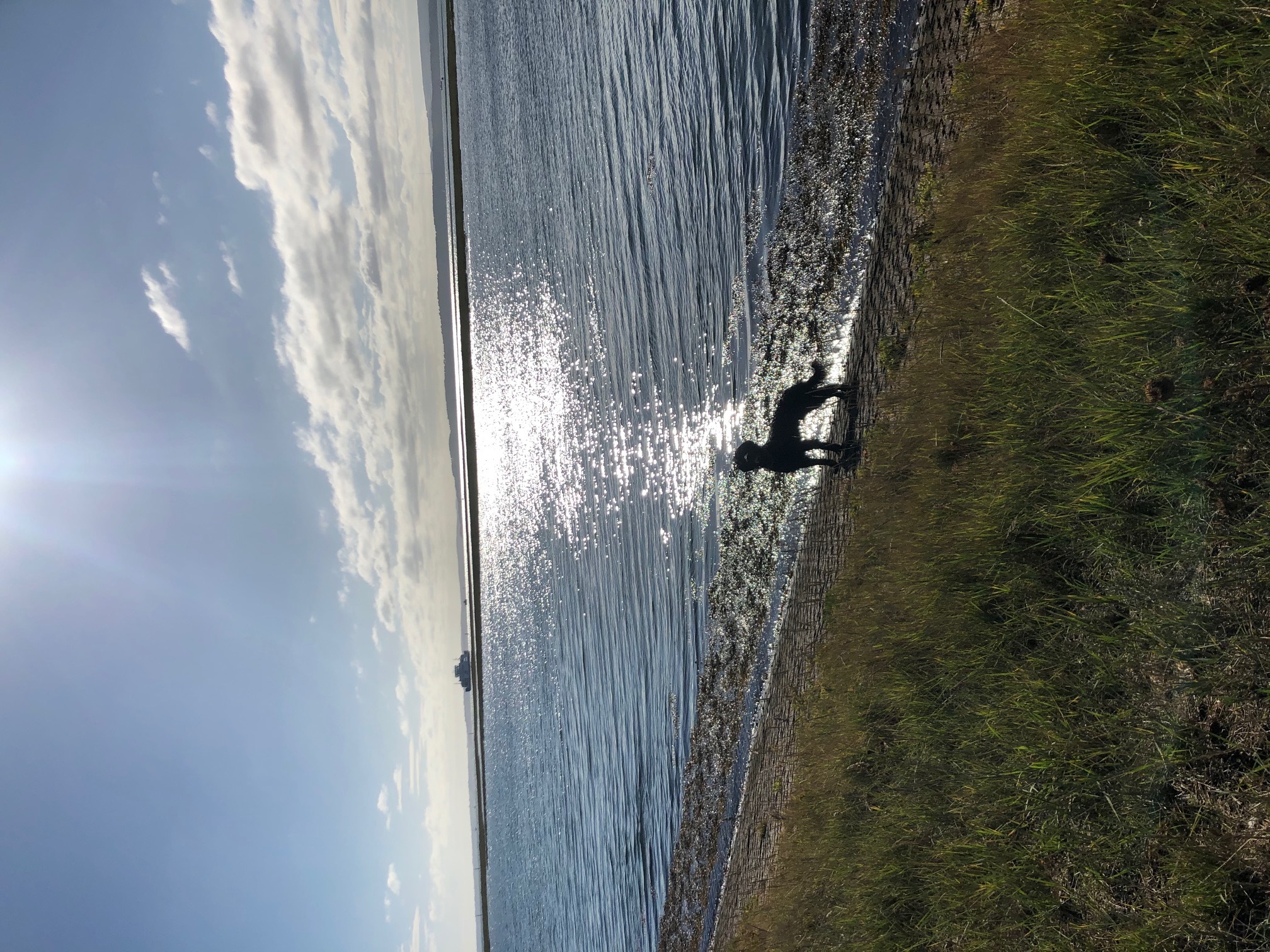 Insee, their dog, spends most of the time swimming, but Libbs sat on the water’s edge ‘minding’ the children and Maryb made little forays into the waves to join them. 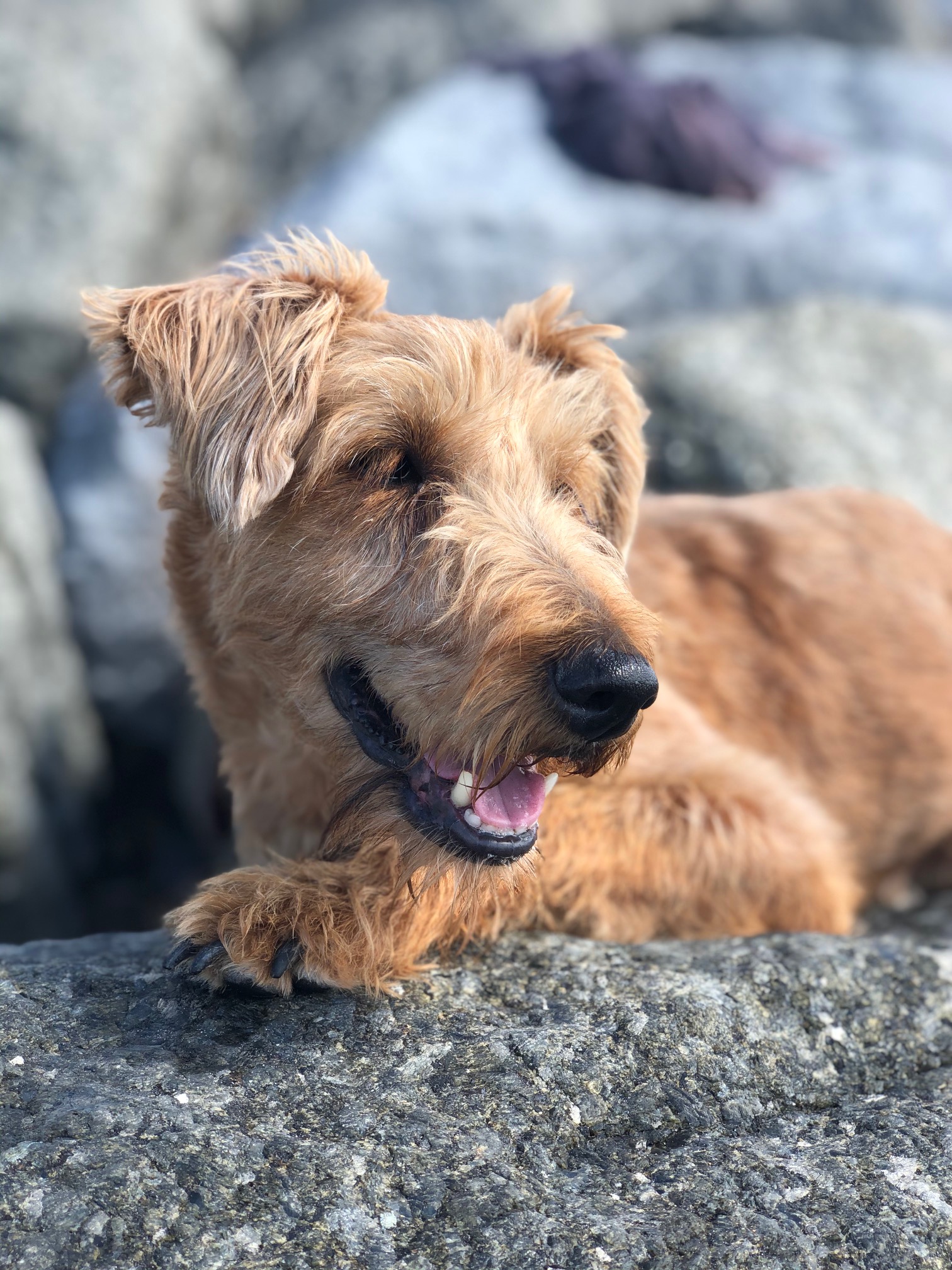 They were so upset when the packing up began and tried every which way to get into the car.  I felt really sad for them and always remember how much our dogs have so passionately loved the children.  It seems to have been bred into them that ‘through life, through death, through every trial that we should guard and love this child’.

We picked ourselves up by the afternoon and turned as usual to tying up the roses, begging them for another bloom or two before the pruning begins.  The dahlias are an autumn solace, but always seem a little contrived and indelicate for me.  One real joy has been a bright blue plumbago planted in a pot at the front door to remind me of the blue Mediterranean so sadly missed again this summer.

We are trying to stop Marybell from hurtling across the gravel chasing her tennis ball.  Both her back feet look sore and she limps some of the time.  Too many wild games, I suspect, but it does concern me as she could pick up an infection.  We followed the prescribed first aid and I’m hoping for the best.  Maryb simply powers on. 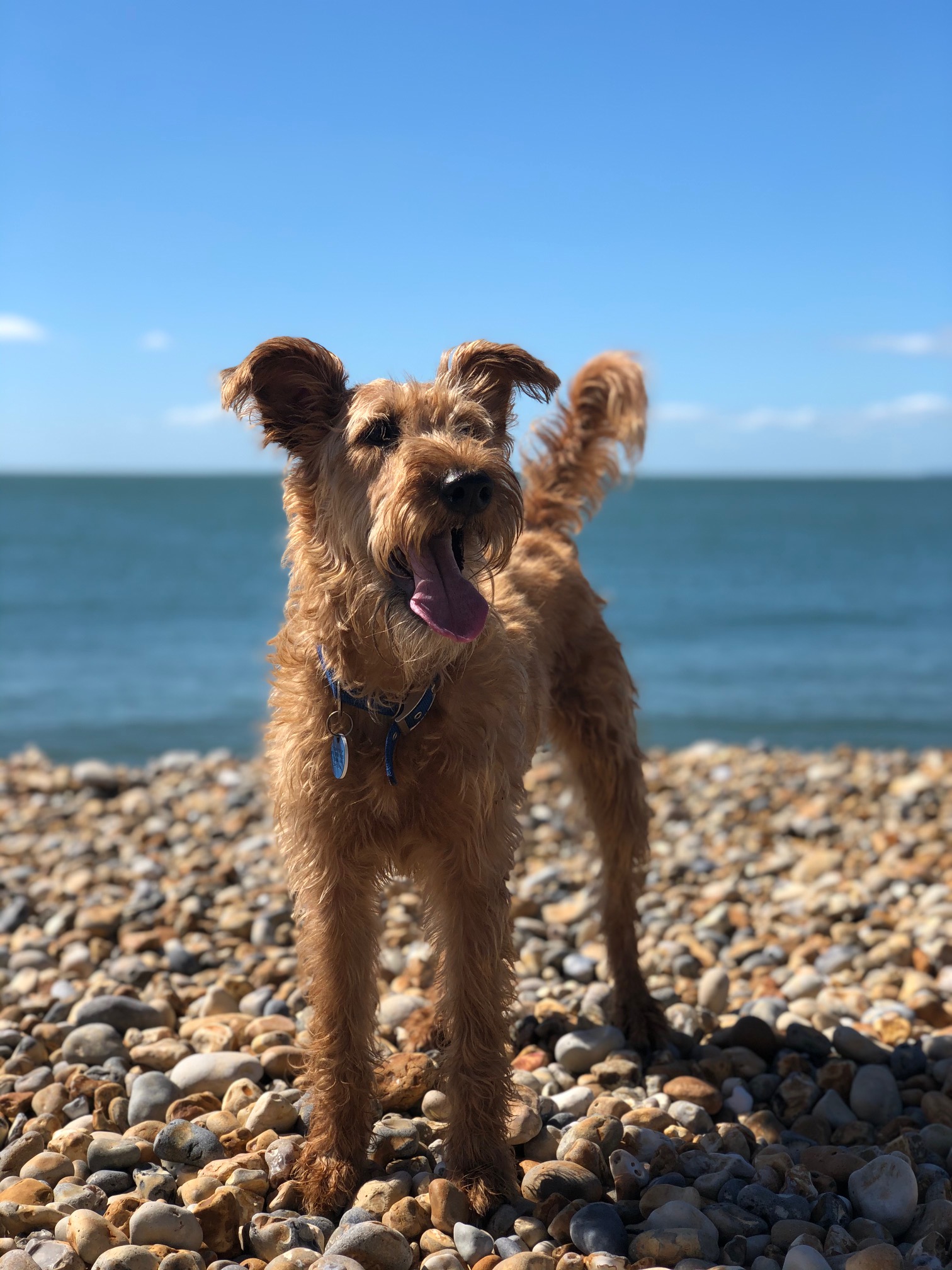 Their great friend Rusty, who had that fall on the sea wall, has recovered well at last.  He had lost some weight and is looking so much better.  He rushed to greet us at the gate last week, with what looked like a green parrot in his mouth.  My heart missed a beat – obviously someone’s precious bird – what a horror.

He thrust it into my trembling hands and revealed a gruesomely realistic toy so lifelike that I almost saw it blink. Libbs and Maryb were watching me anxiously.  They know I can be pretty punitive when it comes to birds.  I did wonder how on earth anyone could bear to have such a grim ‘inanimate’ in the house.  And then I remembered the one eyed, noseless patched up brigade of veterans: bears, bunnies and dolls that litter my house . “But ours are all loved, I say to myself, in spite of their partial demolition and their often have time out in rehab”.

Some of you have asked who does the pictures for the newsletter.  Well, many are taken by Marie, who walks them in the Forest.  She is a charming person and they love her dearly.  She has her own horse and grew up with dogs.  She is so good with Bibbs and Maryb and stands no nonsense, especially from Miss Mb, who can be a little rascal.  They have great fun with all the dogs and Libbs is known as the biggest flirt on the beat.  Human boys and entire dogs are her tipple, but she never loses sight of Marybell who heads up the gang of racing demons.  But all is good cheer, provided dins are on time and entertainment freely available. 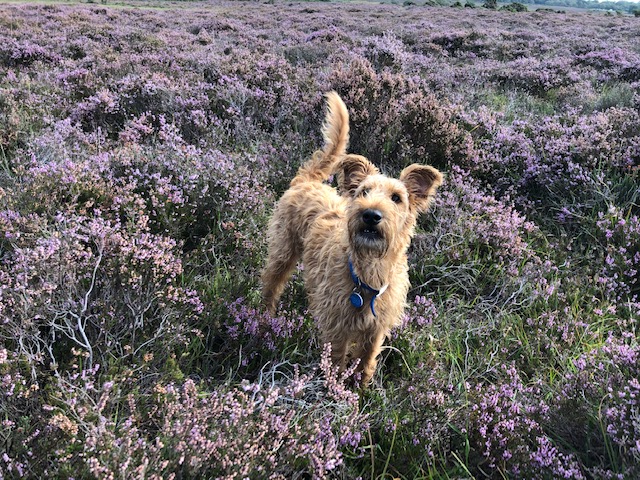 ‘What a wonderful world’!

Do enjoy the last of the summer. I know we need dry weather, but the days are still long. School will be fun and those wretched  exams have been sorted out.

and every prayer for good health

my special love to the dogs