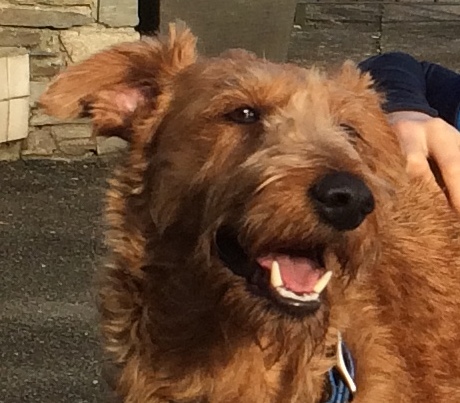 We ran out of space in the last letter and failed to talk about Crufts – and now it seems less relevant as time moves on so quickly. Suffice to say it was brilliantly organised by the Kennel Club and I do know how much skill and effort goes into it.

I left Liberty Belle with Dave and Jeanette (not a backward glance) and was greeted by the hotel staff in Stratford with, “Where’s Miss Libby? You haven’t left her behind,” I had to confess that I missed her too.

We had a very jolly time at Discover Dogs and an excellent mix of newcomers with some heavenly young dogs and the real stalwarts – not least Joy and her ‘3’ and dear Dexter. We’ve all become so quick and neat too – am not quite sure why it seems much easier now. Even standing up all day for 4 days seems quite routine and there are no ‘war dances’ from me over coats not tucked away and coffee cartons mingling with leaflets – certainly not!

Elizabeth, who came down from Scotland with her lovely Tetley said, “I thought our stand was by far the best. I could have looked at the beautiful photographs all day.”

Thank you so much to everyone and especially the dogs for a great performance. We did have a lot of fun and there was a huge interest in our lovely Breed.

Without Libby to walk and entertain, it was much easier to get to the theatre. I saw a very amusing ‘comedy’ version of Don Quixote followed by a grim and ghoulish Dr Faustus. War Horse seems to have spawned a huge fashion for puppets in the theatre and the horses on wheels that charged about the stage were hilarious. Much as admire the work of the RSC, I do wish they’d allow the play to speak and not turn everything into a song and dance, circus / pantomime – perhaps it’s to offset the notoriously short attention span of the contemporary audience… and the level of violence on stage is alarming too.

We were back to Stratford for the Irish Terrier Association AGM held, as always, in Shottery, which is a pretty village (yes, Anne Hathaway’s cottage) on the edge of the town. I was surprised at how much the Spring had advanced since Crufts. The shades of yellow – myriads more daffodils out, primroses everywhere and banks of celandine.

I was pleased to have Libbs with me to enjoy our favourite riverside walks. I always think that my beloved Zuli and Beeg turn up for the fun. They used to join the picnics of the pea pickers in several of the fields, but they’re not to be seen now and the fields are left fallow. The willows are out too trailing their pale green streamers. I’m not sure why they’re always ‘bobbed’ along the river – every year I mean to write and complain to the council, as they’re so much prettier left in their natural state. I adore Stratford and look back at many years of enchanted visits.

The AGM was, as ever, very well organised. They’re a small committee, but dedicated and effective.

Libby was summoned to take part yet again in the Knockout Match. I declined, as she was so wild and over excited last year in her ‘where’s-the-party-don’t-let’s-miss-anything’ mode, that I vowed that it was our last appearance even as a comic interlude.

Ann Bradley, with whom she spent her first 10 weeks, has remained one of Libbys all time ‘specials’ offered to show her for me. Libbs was thrilled and launched into a spot of noisy cartwheeling, but became suddenly quite mute and dreamlike in Ann’s hands – what on earth do these experts do to the dogs? They went swinging round the ring at a steady pace, turned on a sixpence, back again throwing out her front legs – good lord, was this a miracle? I watched in astonishment. She was heaved up onto the table – a momentary anxious look of ‘now what?’ But in seconds she was correctly stacked – head up, hind legs jutting out behind, tail pressed to a perfect set – hands away and there she stood. She would have upstaged Mussolini himself with her chin at a suitable combative angle.

She did seem a little, if not crushed, then certainly subdued when I put her back in the car. When invited to come and ‘say goodbye to Ann’ she did wag her tail – just – but refused to get out. Her look said, “Are you mad? I’m not doing all that again.” I do hope it’s not the end of a beautiful friendship!

The AGM was purposeful, but I get so bored with the arguments about tracing possible genetic flaws. New expensive tests are set up and Breeders are made anxious and feel obliged to follow them up. I was married to the medical profession and know it’s mania for collecting data – helpful as a diagnostic aid without doubt, but as Ian used to say, “Nothing can be made to lie like statistics.” His version of an old quote.

It seems to me there are far more important problems about the future of Irish Terriers and indeed all breeds – increased cancer in dogs, allergies, sensitive digestions etc. My particular cry of dismay is why the numbers of registered puppies has fallen this year and put us back into the ‘Vulnerable Category.’ I dislike that word so much and insist on calling the category ‘Heritage’ – but whatever it is, patently we do need more puppies!

The Kennel Club gave us permission last year to add 3 more Patrons to the ITA list. I had mentioned it last year and approached 3 friends, all Irish Terrier enthusiasts, but of course, it had to wait to be passed at the AGM this year.

We’re very pleased and grateful to say that the Earl of Leicester, Sir Derek Jacobi and Lord Manners have kindly accepted our invitation. I will write about them again, but one thing is certain, they all love the glorious Micks.

I had to be in London for yet another funeral. It was so sad – a dear friend of both Libby’s and mine. I seem to remember writing about Libby always pretending to chase a mouse around the skirting boards of her drawing room, snuffling in the corners and dashing up the stairs. She was a neighbour for 44 years, which is a big piece of anyone’s life, and one can never tell whom one will love. She was an actress, known to be fiery and quarrelsome, but we, as a family, loved her dearly and I am bereft.

I had collected Libb’s portrait from Arabella Dorman – fascinating to see a proper working artist’s atelier. Up, up, up the stairs I climbed full of anticipation and excitement. The studio was remarkably tidy – no paint splashed smock, no straw hat, nor empty absinthe bottles…well, of course not – but a very welcoming Arabella and a friend talking about their work with refugees and Zorba playing the perfect host.

And – yes, set up on an easel was a beautiful painting of a ‘contemporary’ Irish Terrier, unmistakably Liberty Belle herself. Arabella is a genius at catching their character – the brightness, the energy, the warmth and sense of fun. I had to bring the picture home on the train, which required a fair amount of skilled navigation through the London tube. Finding the way to Waterloo Station, unencumbered, is challenging enough. But with a large picture swathed in bubble wrap, plus umbrella, extra coat and a large handbag made me feel like an abused pack mule.

How is it that other people are so clever and seem to know exactly where they’re going, whilst I drift about, taking every wrong turning and finding every cul-de-sac undiscovered by anyone else in the history of the London Underground – or so it seems to me.

Carrying it home from Lymington Station through the dark deserted streets was another episode. I sometimes wonder whether I set up these ridiculous tasks for myself just to see if and how I will manage.

I do want to mention the ITA 2015 Year Book. It is absolutely excellent with plenty of ‘stuff’ for the serious – and fun pieces for the pet owners. Congratulations to all who were involved. It is well worth being a member of the ITA for the sake of the Year Book alone.

Now a confession. I have bought a new scooter. The little micro one I rode around London is a hazard down here as the pavements are uneven and the roads rough. My best scooter was a Roadster, but Zu and Beeg kept tugging so hard and leaving me ditched on the path. This one is far more handy and a bright electric blue – very smooth and fast. Libby dislikes it intensely, fussing and barking, just like Zu and Beeg for whom I wrote this piece. I do hope it makes you laugh – 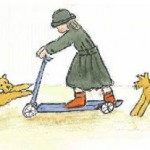 Our mum has a scooter
It’s so embarrassing.
Everyone stops to talk
And ask where she bought the thing.
At first we tried to pull her off
But she insisted…so we had to give in.
Now we run like the wind all round her
And need to keep watching
For she can disappear rather fast
And sometimes falls off!
And we have to help.
Why can’t she just walk?