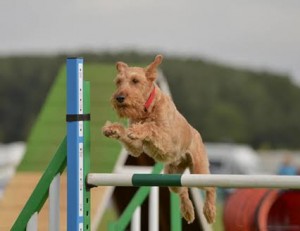 Tollo arrived in 2005, my ‘thinker’ and so his story starts. At the age of 1 he was appearing in a dog display team, jumping through fire, and also being rather naughty and playing with the other dogs in the ring. So that was short-lived, and our attention turned to agility.

Tollo measures large so has to jump the 650mm height. In 2008 he won his first rosette, a 3rd place in Agility, that was a great moment, but our winning glory did not continue for a while. I was a novice handler and Tollo an Irish Terrier, with ‘attitude’, by that I mean he did not take kindly to me going wrong, and I was put in my place, much to the amusement of the judge and onlookers.

With a lot of help, we were slowly getting better, 2009 saw us winning grades 1 and 2 and by 2010 we had won into grade 3 and our confidence was building.

By 2012 we had reached grade 4 and in the same year grade 5 – what a feeling that was, we were becoming a real ‘team’, and we were being well placed at every show. We also had our ‘moments’ when things went horribly wrong, always my fault. The higher grades suited us, as the courses need handling and that’s where Tollo excels. We were looking for just one agility win to swing us into grade 6, lots of near misses, but not that elusive first place.

2013 the rules changed, 3 agility wins were required – oh no, we’ll never make grade 6. How wrong I was. We started the season at the Easter show, and Tollo was on fire. He had 12 runs and ended up with 8 clears, including 5 places, one of which was a 1st in agility. We were on our way. Our confidence was sky high. In May we got our second win, and in June probably our best run, 1st place in agility against well over 100 dogs, a lovely handling course, he ran his paws off! We had made grade 6 – what an achievement for an Irish at the large height.

We had a brilliant time in Grade 6, we loved it, all the tricky courses we had to negotiate. Tollo was in his element, and still picking up places. Yes, it had taken a long time, and yes it was very hard work. We did have our ups and downs along the way, but I can say it now, it was so worth it (my friends will laugh at that remark – how many times had I nearly given up!) Tollo has also achieved his Agility Warrant Gold from the KC. Sadly at age 10 he is now retired from large height, but still loves training and the veteran classes.

Now it’s Bullet’s turn, my other Irish, he is very late to mature and is 5 now. Like Tollo, he has to jump large height, even though he is smaller, and more petite. He doesn’t have Tollo’s confidence, or drive, but tries hard and loves agility. After a winter of grid training, 2015 has been a good year for him, picking up places at most shows, and his confidence is growing. Another winter of training and hopefully 2016 will be his year – whether Bullet will reach the same dizzy heights as Tollo, my star, only time will tell.

So Irish Terriers, give agility a go!