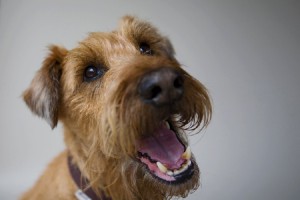 The sea wall and the edges of the salt marshes are swathed in masses of blue-purple sea asters…I can’t imagine how they survive in this brackish water, but they do, and are as lovely as the spring bluebells. They do tell us that summer is over and the days are growing visibly shorter. There are still a few housemartins swinging across the sky, but I think the swallows have fled. They need to cross the Alps before the first snow falls.

Libby watches our two canaries, who have taken to flying round the conservatory. She keeps her head well down just in case of temptation, chin on the floor and her eyes following their every flutter. I can never understand why some people (undoubtedly well intentioned) feel sorry for caged birds. They have such a great life and when I look out at our poor little robin trying to shelter under the bird table with the rain beating down, I know where I’d rather be!

I seem to have spent the last month up to my ears in Irish Terrier affairs – a good excuse for this belated letter.

One project is the new-look website, which is stunning and almost ready for us to enjoy. It will be so much easier to ‘navigate’ (see I’ve got the jargon, but not the understanding) – this however is what they tell me! I do however love the general presentation. We’ve spent hours arguing, or should I say debating, the pictures, colour, font, text, number of pages, interaction…Stuart has been splendidly patient, but for me it has felt as monumental as moving house and even more baffling. The cry goes up, ‘I need a print out of that, I can’t read anything on that screen.’ We are all very thrilled with it and I now realise how quickly things can become out of date.

I hope so much that you will approve.

We’ve had fun making our first video for the website and I saw the rushes yesterday. Adele, who lives in Lymington, is a professional film editor and came up with some excellent ideas.

We photographed Liberty Belle at her most animated, chasing around on the marshes, dodging the cows grazing there (don’t be alarmed, we’re all good friends) and diving into the rabbit holes. She does a little sea bathing too, submerging only her legs, we always say ‘up to her armpits,’ and plunging forward, delicately of course, to retrieve a stick without getting her nose wet.

Adele’s nephew, who was behind the camera, remarked ‘I’m sure she knows she’s being filmed,’ and I replied, ‘She thinks it’s another jolly occasion,’ and she, as usual, is in the thick of it.

We filmed the family children with Tess and Nonnie and I did find them enchanting. My son James spoke with unerring clarity about our wonderful Breed and then – oh dear – it was my turn. Well – I do look and sound like a posh old bat, which did make me laugh, but feel perhaps my great love for the Micks comes through.

Libby was sitting beside me a little bored and nodding off, but when I spoke of Beegie and the great help she was when my husband died, she got up earnestly watching my face. She must have somehow understood my anxious moment. It seemed very poignant on screen, although I hadn’t particularly noticed it at the time. There was a completely unconscious reassuring pat and she settled down again – but how incredibly instinctive they are – I think it is part of their magic.

Talking of films, The Animals at War Memorial Film, is on a link for us all to share – https://vimeo.com/141398312. It is interesting and very moving, beautifully produced by Upper Cut Films. The Micks have a good innings, but then Chris and Chris, who made the film, have their darling Molly Malone so we were in with a good chance.

Jilly Cooper always has me in tears, she feels so deeply for animals and played such a huge role in setting up the Memorial fund. She talks of all the little animals, even the glow worms and the larks that rose up into the sky as soon as the guns were quiet.

As for us, Libbs was angelic, but I should be banned from being seen ever again wearing such bright red lipstick. I thought for one moment I must have met with an accident.

It is such a relief that the calendar 2016 has gone to press and will be ready for sale in November – so do keep a lookout. It’s such a help if I don’t have to spend Christmas Eve annoying everyone in the Post Office!

We chose a bright purple for the background colour this year. It’s quite a change from the last three, but very effective I think. Thank you so much for all the lovely pictures. Please don’t be disappointed if you haven’t ‘made it,’ but we will put the pictures up on the website, where they will be greatly enjoyed. Some photographs came in too late, but we will keep them carefully as ‘possibles’ for the following year.

It always seems a little eerie to me to look at Christmas 2016, when we haven’t done 2015 yet, rather like seeing the route ahead. But time rolls on so quickly and I’m always sad to take down the old calendar.

My cousin Alex and her 4 children, plus Insy and another large doggie friend, came for the Bank Holiday. Liberty Belle is besotted with them, especially the eldest girl Millie, to whom she sticks like a limpet. The rioting was considerable, but I left them to it and went off to Brighton for a Bank Holiday wedding (no tears from Libby when I left). The ceremony itself was held on the very pretty Victorian bandstand on the seafront. It felt rather odd being up so high with a 360 degree view and massed crowds of spectators all round. I wobbled home the next day after being up most of the night.

We drove to Marlborough for the Gifford’s Circus. This is an annual gathering and as usual, for me, the dog act stole the show. They were a white Boxer and a ‘mixed’ terrier. They’re pets, not ‘real circus dogs,’ enjoying every moment and making some hilarious mistakes. They seem to have enormous fun and the finale was when they went round the ring jumping over and under one another to thunderous applause – having a few mishaps on the way.

Libby met Biggles, a new family dog, for the first time. We stayed with cousins Frank and Alison, who had been so heartbroken when old Bartie died. They decided to have a smaller dog, who would be able to fly with them in their light aircraft. Hence the name Biggles – although Libbs and I are convinced he’s named after our canary. He’s a dear boy, still very playful – I don’t think he’d ever met up with a girl before and was intrigued by Libby, until his great hero Insy arrived and they all went spinning around the lovely garden.

Now a great sadness – darling Bella Jacobi was put to sleep two weeks ago. She was so dearly loved by Derek and Richard and we all know this terrifying grief. Many of us caught a glimpse of her on television in their garden when Derek was being filmed for ‘Who do you think you are?’ At 14 ½ she was still very charming, beautiful and a great ambassador for Irish Terriers.

I had always thought that I’d get better at managing the loss of a beloved dog, but frankly think it gets worse as one grows older, as each one seems to add to a mountain of accumulated sadness. But then one remembers the joy of them, the laughing, the warm presence and passing time does help, if only a little.

Libby and I had lunch with them. She was very excited and went prancing around the house. She puddled very solemnly and deliberately just inside the back door – I was horrified, but think she could sense Bella and was leaving her mark as a gesture of recognition. I am pleased to say Miss Libbs was very embarrassed and apologetic, sitting with a paw held up and a look of suitable contrition. She made a great fuss of Derek and Richard, which did help to keep us a bit more steady. I too adored Bella, she was a great favourite and I miss her terribly.

We were at Roade for the Fun Day. It wasn’t quite as busy as usual, but the judge made it great fun for everyone and seemed to enjoy it as much as the children and dogs. Libby didn’t do the races as I was busy selling books, but she spent time with Jane England, learning the mysteries of the agility apparatus. Jane is a great expert and I was amazed to watch Libby sailing over the jumps, snaking round the posts and plunging through the tunnel. Jane remarked how quick she was to learn, but I replied, ‘Not if I’d been coaching her.’

Sadly Jane lost her dear old Bracken recently, but Mungo, who is ‘the face of the website’ and our smiling sticker boy, is still, at 10, a great Canix addict. He and Jane have done so well with their running.

Discover Dogs is at the O2 Centre in London on Saturday 17th / Sunday 18th October. I have only just heard this and had imagined it would be, as always, the Remembrance Sunday weekend. I will be there on the Saturday, but there’s a family 50th Wedding Anniversary on the Sunday and Libby and I need to be there.

The Animal War Memorial Gathering is on Friday 13th November at 11am and I’d love to see you plus the ‘best beloveds’ at the Memorial in London’s Park Lane. We’ll lay our wreaths for the Airedales and Collies and of course our Micks and remember all the other animals. We must never forget.