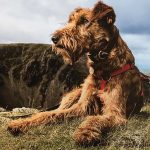 Alfred on the cover of calendar

Dear Irish Terrier Friends.
We have had a rather anxious scramble with the calendar this year. I was unaware that the usual procedures were not being followed correctly – pictures were not sent on to Debbie on time, email boxes were jammed full for weeks and I am so embarrassed and can only apologise. Thank you all for rising to the challenge and sending in some lovely last minute pics. and all is well.

I love the 2018 Calendar which has an orange coloured background and some touching, amusing pictures full of our love for our glorious Micks. They will be ready for posting on December 7th. It is a huge help to me if you order early, either through Paypal or telephone me on 01590 670031. It saves having to burn the midnight oil right up until Christmas.

Discover Dogs at the ExCel Centre this year required more organisation than before with 2 dogs to leave behind with Brenda. I was round Regents Park at the crack of dawn trying to tire them both out before setting off on the train to South London.

The crowds seemed bigger than ever and I do love the fact that they are all ‘pet’ people who come simply because they love dogs.

Our best beloveds were all old friends and their patients and charm dealing with hundreds of strangers is extraordinary. There was a huge interest in the breed and I am always delighted when people arrive saying “we took your advice last year and have our own lovely boy/girl/baby” and one is immediately locked into the phone camera peepshow – not easy to see and they don’t vary much but the pride and joy of their owners is so endearing.

I have to admire our teamwork. We’re wonderfully tidy and organised. The photograph boards have been redone and although more work-a-day they are effective and certainly easier to set up. 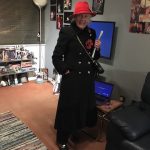 leaving for the gathering

Memorial was a near takeover by the Irish Terriers – there were 16 Micks on parade although one was a darling puppy in her Mothers arms. We almost managed the silence with only a snatch or two of woof woofing but then why not? And a small scuffle during the photo call – all in a days work.

I feel so passionately about the animals and the need to remember all that we owe them. May we be forgiven?

Derek and Richard came which was so dear of them considering the house move (how I hate the word relocation) was imminent. Jilly Cooper read a moving piece and the 6 Cavalry horses looked effortlessly magnificent. One of the Chargers was a splendid grey with a silver mane and tail, groomed to perfection and breathtakingly beautiful.
I stroked his nose feeling quite weak with admiration and he gave me that look ‘Oh bother you’ and turned away. But sadly there was no pack mule or donkey this year which was a pity. I will always remember dear little Rosie who served in Afghanistan.

There is talk of a walk in the park next year, a posse of Irish Terriers gallivanting through the park – sounds fun.

Incidentally, we have discovered some more stories about the Micks on the Western Front and are planning a feature on the website. We even found a piece praising their ability to run messages which Colonel Richardson had always remarked amusingly “The Irish can do everything except perhaps run messages – they are far too convivial and like to stop and talk with friends old, new or imagined.”

Derek laid a wreath for the Irish and I for the Collies and Airdales.

Lord Astor of Hever read the prayer for the animals this year, he is the great-great grandson of General Haig who loved and admired the breed and has his own Irish at the Front.

We lined up for our usual, rather chaotic team pictures which are always fun to look back on. If anyone has a pic please send it to me as I don’t seem to have one for this year.

I thought you might be interested in the piece I wrote for Zu and Beegie but it could have applied to any of the dogs.

The dogs are here
We come each year to the War Memorial
Wearing our poppies
“Their forebears served in the trenches”
I say, several time, very loudly.
I do wish they’d stand still and look gallant
Instead of scrubbling for crumbs
and bubble gum stuck to the pavement
They peer around hoping to spot a chum
They do love a crowd.

But when the bugle sounds
We are silent
And I, a wartime child, remembering the Dead
Bend over their heads
To bury my grief in their dancing eyes.

We met up for lunch at the Kennel Club later in the week which was our usual jolly affair. Rose Smart, the Chief Executive joined us and also Diana Rigg who loves dogs and is in any case very good company. We trooped downstairs to admire Libby’s portrait and my son James managed to lean up against it whilst having a picture taken and set off the alarm – but no one was arrested!

We had a very happy few days staying in my mothers old family house in Somerset. It has become a wedding venue and is run as an organic farm. We have offloaded some family portraits as no one in the family can find space for them any longer. We felt indeed that we were taking them home.

It was curious and very nostalgic but some of the real joy was that the dogs were made so welcome. We walked them up to the ‘Stone Field’ every day so called because of an ancient stone circle at the top of the hill behind the house. There are marvellous views right across the Quantocks and the Bridgewater Bay. Biggles a Jack Russell terrier and my 2 girls are devoted friends and the rioting never ceased.

Marybell was intrigued by the chickens especially the large roosters that strut around in the huge open barns. Their complicated politics was interesting to me but what a joy to see them so free to move around and quarrel as much as they like. There was an enormous Gloucester Old Spot sow which became a great favourite penned on her own as she has been declared or is it diagnosed as being baron. She was a real pantomime act grunting and rolling like a small hippopotamus, tossing about in her mountains of fresh hay. The dogs were riveted and it is said that pigs are even more intelligent than dogs. I did get the feeling that this one knew how to play her audience and enjoyed the laughs. ‘She will have to be sent away but we will get the vet to put her to sleep here before she goes. She has been such a character and amused our guests.’ I really loved that.

Our darling baby Marybell is now a large bouncy 6 months old “wild, wicked wayward and bold” We don’t unfortunately have ‘good citizenship’ in this house and there is no naughty step either.

I have seen it many times before and know that it won’t last long and she will in her own time emerge as a charming, clever, funny, loving and utterly irresistible charmer.

I do understand that obedience and lead training are sometimes necessary but I am permanently as it were on site to deliver the odd serious reprimand or in extremis a boot out of the back door. Libby, bless her, is the soul of patience. She is my completely forgiving unflappable side-kick and we manage Marybell’s adventures between us. Libbs seems so grown up now – still very playful but she does stand back and allow Marybell to fling herself around greeting friends, willing or unwilling, canine and human with hectic enthusiasm. She squeezes every ounce of enjoyment out of every moment she is awake. When at last she puts herself to bed after a final explosion of energy before the last curtain Libbs and I stagger upstairs. We both absolutely adore her and ignore every indiscretion and there are plenty. I do find myself tiptoeing down the stairs for a last bedtime hug. She is so quiet and limp in Beegie’s old bed. She still has that delicious puppy smell, she stretches out “Oh it’s you again, I was just nodding off!” Dismissed I float back upstairs wondering as always how on earth anyone manages life without the joyful nonsense of 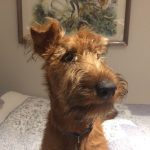