Am I the only foolish optimist who has waited in vain for a little patch of Indian Summer sunshine – the golden glow to sweep us all towards Christmas? Alas no, not a sign of it. But our Golden Glow is too young canaries – pale yellow, delivered by courtesy of Lymington Taxis and organised by my daughter in law Laura, this is how it happened.

Biggles has been our 15 year old flying ace, Houdini escapologist who was to be my very last canary. He has shared the breakfast table in the conservatory with me for years. Miss Libbs and Maryb have always treated him with great respect, but I knew that he was becoming desperately lonely. He’d sit in front of the big mirror, looking at himself. And I used to think ‘poor chap’ and felt rather sad for him.

But last week, when Jeanette was cleaning around the cage, she noticed that Biggles had suddenly tilted forward and was lying across his seed pot, panting with his eyes closed. I went dashing through and was appalled and called his name, “Biggles, Biggles, come on now.”

I was astonished as his eyes flickered open and he tried to stand up. My heart missed a beat. He was however, perfectly fine in seconds, and such a resurrection could not remain unrewarded. Hence the 2 little dolly birds named (immediately) Primrose and Celandine.

Biggles is thrilled with them and they all sit together on the same perch, and he tries to feed them and sit up close. I think they may both be hens but are really too young to tell at the moment. All I can say is that it Is so enchanting to see Biggles happy again, I wonder whether he staged it all on purplose! But it’s so sweet to watch them flying about and playing together.

I’ve been in London for a week and finally came home absolutely exhausted and not feeling very well. Everybody says slow down, and I say bother that! The mountain of clothes I took with me for all weathers, heat, cold and tempest were packed with the help of Libbs and Maryb. They take a huge interest in the packing. I have to be careful to close the case or things get taken out and redistributed and they’re not above making a nest of underwear and climbing in the suitcase!

They love it when Marie and her partner come to stay in the house and look after them, but I’m very careful not to have them here when I drive away. I learnt my lesson about saying goodbye when the children were young and had begged to come to the airport to wave me off.

There was a platform at the time, especially for watching the planes take off with a nice walk across the tarmac, time to wave and a little pirouette at the top of the steps. When I looked round the children were all in tears, heads bowed and shoulders shaking, what a fiasco! Poor Nurse Pam, who was a gentle soul, was trying to comfort them.

And I have to admit I was in tears by the time I buckled my seat belt. wondering whether we were all emotionally scarred for life. Now the strange things is, Libbs will never say goodbye to friends. She stands behind the front door with her tail tucked under. Does she know about parting being ‘such sweet sorrow’? Of course she does, she’s a very elegant old lady with a lovely head, deep brown eyes and she’s the soul of kindness to us all.

Now that she is well into her 11th year however, I recognise the signs of ‘willful disobedience’. She’s never been very cooperative on the lead, but now it’s a matter of lunging hither and thither, pulling as hard as you like and the devil take the hindmost. She dislikes any real dramas but I did have a small apology this morning when she was caught out on the wrong side of the gate – ‘verboten’. She has frisky bouts of skittishness, tossing up her skirts and launching into what we call ‘elephant dancing’ which has us in stitches. 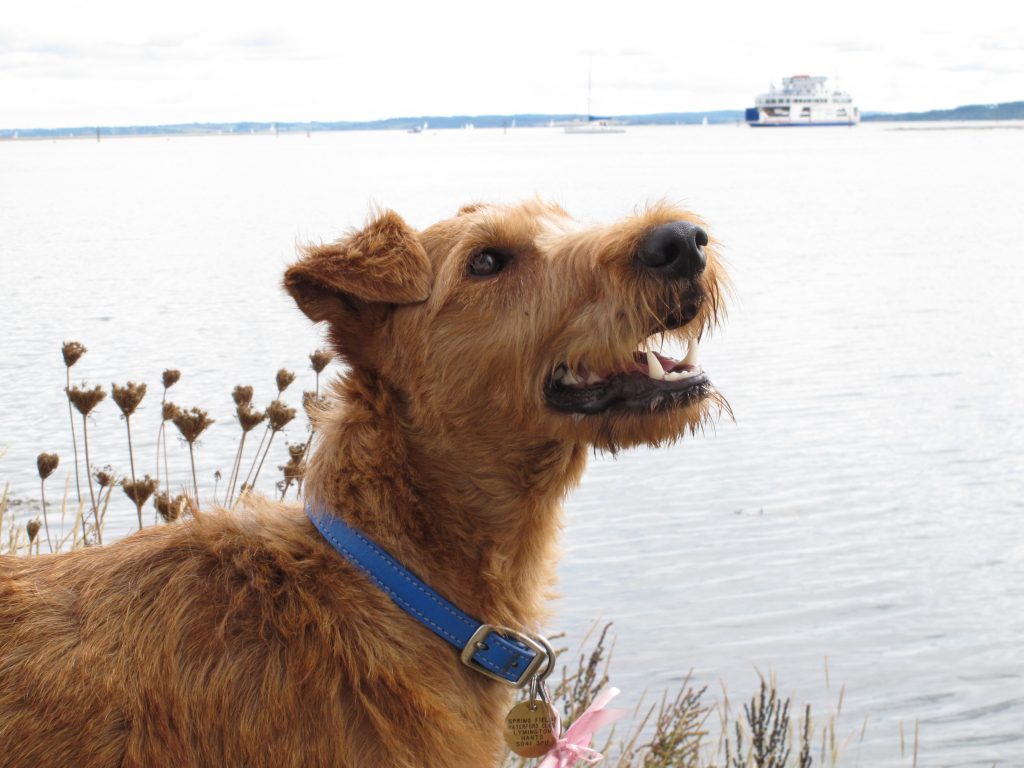 We were very excited to have a Dog Show at long last, The Irish Terrier Association arranged a double act – an Open Show in the morning and a Championship Show after lunch, to be held at Roade (Northants) which has always been the venue for the Fun Day and brings back happy memories of Beegie in fancy dress, enjoying all the games. We won the sausage race so many times that we had to the decent thing and retire! I went off to London the previous day to be better placed for getting to Roade on the Sunday.

My friend Omar at the local garage in London, said he had a friend with a ‘lovely lovely car’ to take me there and back. What he didn’t say was that the car was the longest, brightest, whitest stretch limo in which he drives the Saudi Princes when they’re in London. What a horror! Who on earth would arrive at a Country Dog Show in such a ridiculous car? 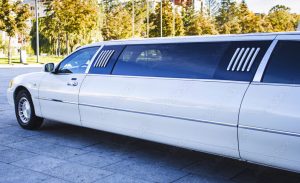 I felt like the Pasha’s 3rd wife and almost lost my courage, I’m not easily embarrassed but worse was to come . . . Ahmed took no notice of my shouts from the back seat and waving the Show Programme about, I’m not sure that he could even read it! (dark black print and no dots and scrolls).

He was obviously never going to listen and kept flicking his hands over his head as we did the proverbial Magical Mystical Tour of the Northants countryside, speeding through woods and villages, winding through fields, until eventually he stopped and admitted defeat – we were lost!

Another 20 minutes and much finger flicking, resetting the Sat Nav and reversing out of Cul-de-Sacs when suddenly, Roade emerged like a vision of the Holy City. Here at last!

Thank heavens the show was in full swing and I insisted on his parking ‘around the back’ – Ahmed was obviously mystified as to what was bothering me.

The show was a huge success – enormous fun to be with a bunch of Micks and so many old friends – there’s always a touch of the Hoolie about us and the sheer joy of mingling with our best beloveds. It all seemed so familiar and absolutely delightful.

There was the odd loud comment, “Well, I’d have put up the other dog, wouldn’t you, obvious” – ah well, bless all those who keep the committed interest in dogs alive, they are the life blood of the dog world.

You may be pleased to hear that Ahmed and I remained scrupulously polite throughout and when he drove me home the next day, presented me with the white limo’s umbrella and said “Sorry for that, but you are my Mom Ma” (he might have said Great Grandmother) but I only blushed and smiled. “I like your dogs” he said and I answered, like Mrs Brown, “That’s nice.” 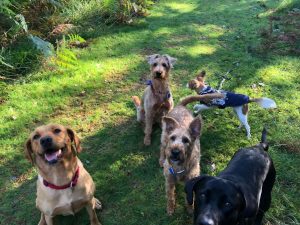 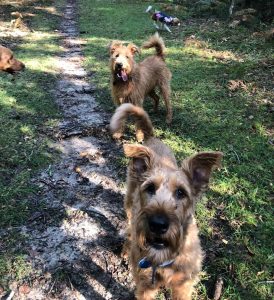 Maryb, Libbs and friends on thier morning walk in the forest.

Have you all seen the lovely Irish Terrier card which the RSPCA are selling? The picture is a beautiful Irish Terrier surrounded by lilac blossom with that look of intense concentration, intelligence and so full of life. Our beloved Micks seem to have made it to the mainstream and they are so beautiful and full of fun. Does anyone know whose dog it is? Let’s buy them all out so they have to order more. (Noel Tatt 01227 811600) 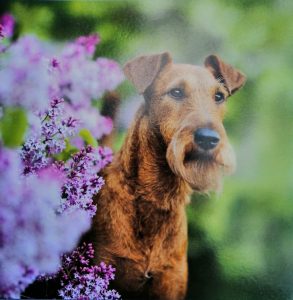 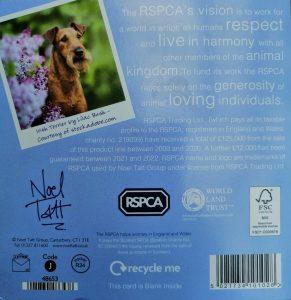 With my kindest good wishes

My special love to the dogs 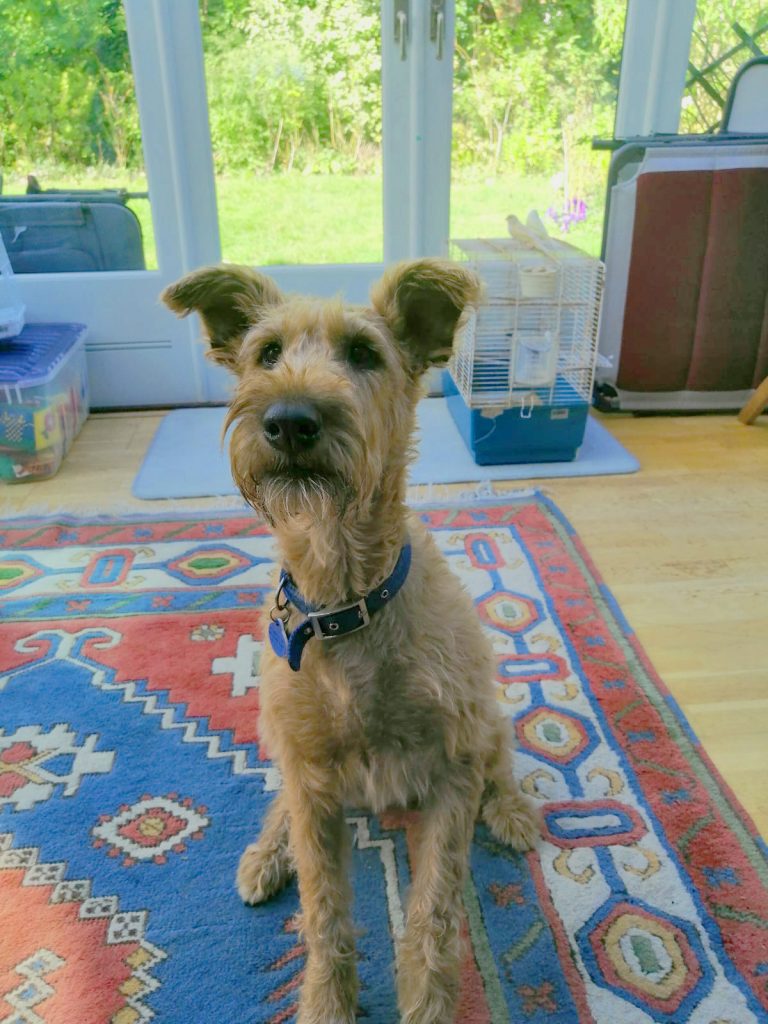