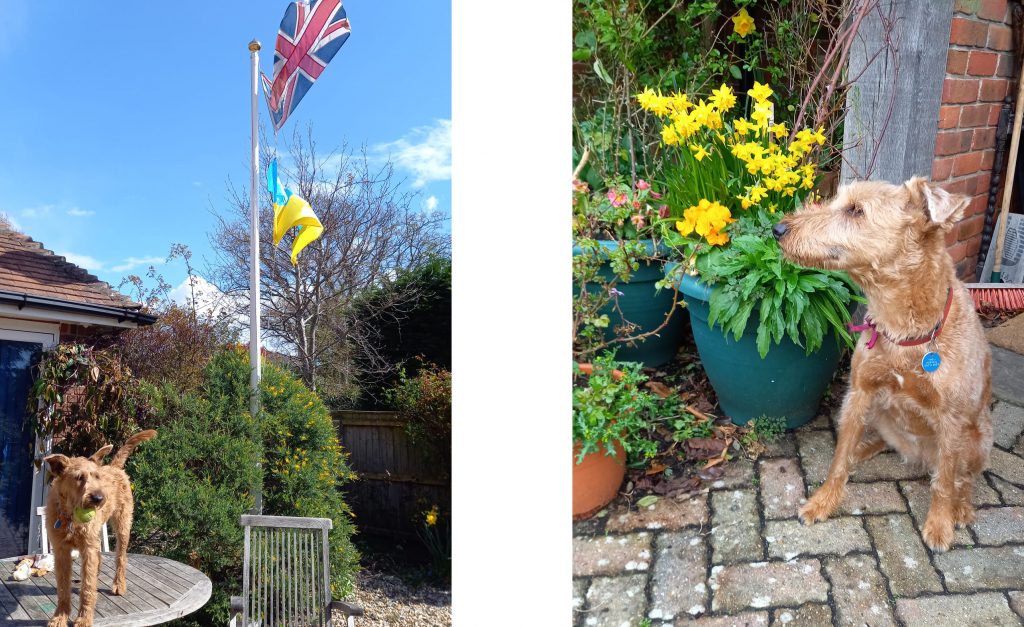 Jamie’s first grown up job was as a Defence Analyst. He follows this ghastly Ukrainian war like a tracker dog and confidently explains to me that ‘Russia cannot win’. One can only hope and pray that his judgement is right. But the trauma will never be forgotten by those involved – poor poor people. I have been so sad for their pets too, the poor old man the television clinging to his dog and saying “He’s too old to move, so I must stay with him.”

My so dearly loved husband Ian, was a surgeon attached to the Paras during World War II. He never forgot the horror of the Normandy campaign and the terrible scenes in Singapore’s Changi jail. He never complained or asked for sympathy but I knew that he never ever forgot.

We have a flagpole in the garden, a gift from Boo and Laura when I left London. We fly the ‘Jack’ and the ‘George’ regularly looking, as I once said, like a ‘Maritime Outpost’. But we have bought a blue and yellow Ukrainian flag online and it now flutters there too.

Miss Libbs and Marybell love to stand on Jamie’s bed looking out of the window to see the flags blowing in the wind at eye level. We say “Three cheers for Her Majesty the Queen” followed by that rather zany command “Remove Headgear”. I’d like them to salute and wonder whether a ‘high five’ might do, I’ll let you know how we get on.

Marybell is still obsessive about any tennis ball that rolls her way. She’s also learnt to ‘make a pretty voice Maryb’, no shouting and barking, she pauses and listens making her little kitten voice when she’s re-located the right place in her throat, only then will we throw the ball for her.

They are such irrepressible enthusiasts about anything they haven’t seen before, something else. I’ve had some new long pink waterproof boots and they have been inspected with huge consideration, carried about here and there and I have been known to hop round the house calling “Where’s my other boot?” 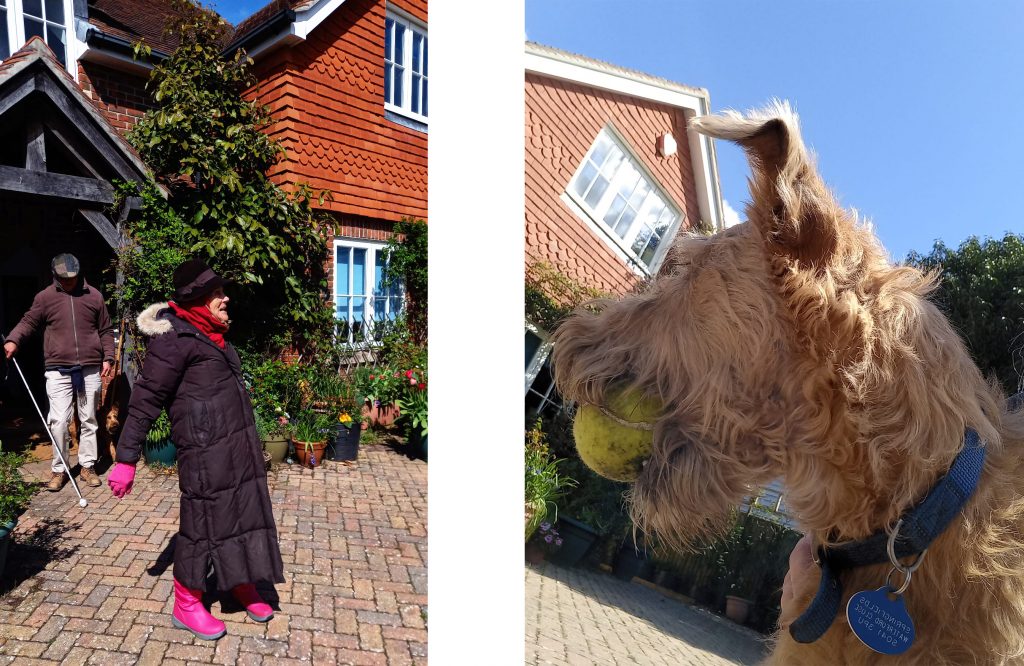 Now the great news for this letter must surely be about Crufts. How fortunate we were to hit the short pause between 2 bouts of Covid, I was determined to be there and I’m perfectly sure everyone knows that we won the Terrier Group. It was a great ‘hoorah’ and wonderful for the Breed. I have mentioned so many times that I’m no fan of dog shows – mainly because only one dog can win. I do know perfectly well, however, that they are a shop window for the Breed and remind everyone of the importance of Breed Standards.

Discover Dogs was a stroke of genius set up by The Kennel Club and changed the whole scene for me. I enjoyed it from the start, once we’d got our heads around how to manage the Breed Stand. It has been the best possible way for the Micks to meet and wow their public. They do certainly have more swagger and glamour in the Ring than their heroic forebears, but the essential outline is the same and the perfect balance of their bodies has never ceased to enthral me. “Now stop that Lucy J, you’ve said this all before!” 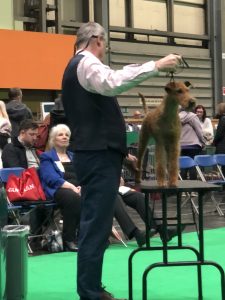 Everyone knows that a lovely boy called Donnie, won the Terrier group for us. He’s every inch a champion and looked superb in the Ring. He was expertly handled – a great performance for Crufts.

There was the usual chunnering about ‘type’ and I did feel that he looked just a tad too slight and light on his feet – not quite the famous drive from the hind quarters. He’s still young and in any case, that is only an opinion – more a matter of taste and preference and not a fault.

I was laughing gently and remembering how Boo and Jamie, aged about 8, insisted on entering Miss Bunch and Becky Price in a local village show. “We’re sure to win” they said but we’d walked across the fields and the girls had paddled up to their shoulders in the river. In the first line up a voice boomed out through the loud speaker “The Judge asks the 2 wet dogs should be removed from the Ring”. Dismay and fury from the boys who said in outrage “Well what’s wrong with being wet? You can still see they’re the best through their wet coats”.
Well, not quite.

My granddaughter, Kate came to help on Terrier Day. She’s been many times before, for several years she had purple hair and a silver ring in her nose. Now in her 20s, she is as neat as a pin and an excellent help with the crowds wanting to talk about Irish Terriers – it was fun to have her around. And she also unlocked the mysteries of how to exit the NEC, always a challenge for me!

We had some lovely dogs on the stand to fly the flag and the nicest possible presenters to show them off – a huge Thank You to everyone. 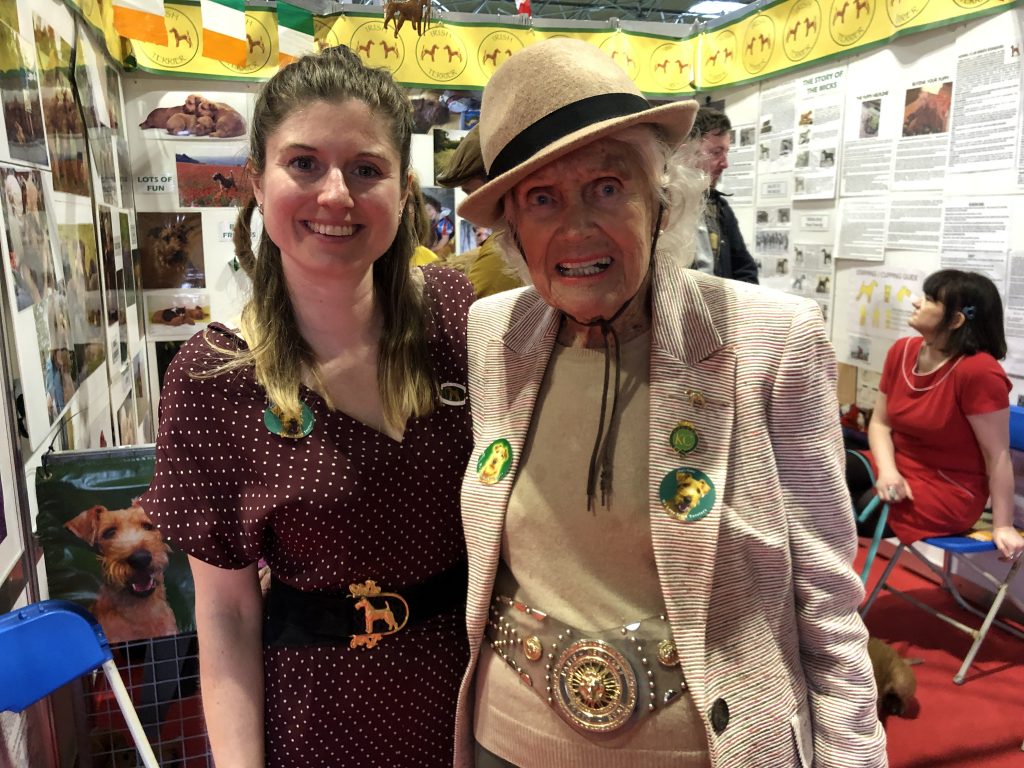 Talking of presenters, I was interviewed by Sophie Morgan, a charming person who was injured in a car accident in her early teens. She does all her work as a television presenter from a wheelchair. Unfortunately, the noise from the show was so loud we could hardly hear one another speak.
Debbie has put the piece up on YouTube. There wasn’t time to say very much except that with my hand on my heart, I confessed I was not a Breeder but simply a lifelong devotee which made everyone laugh. I was very touched by Sophie’s courage and very sweet manner. CLICK HERE TO SEE IT. 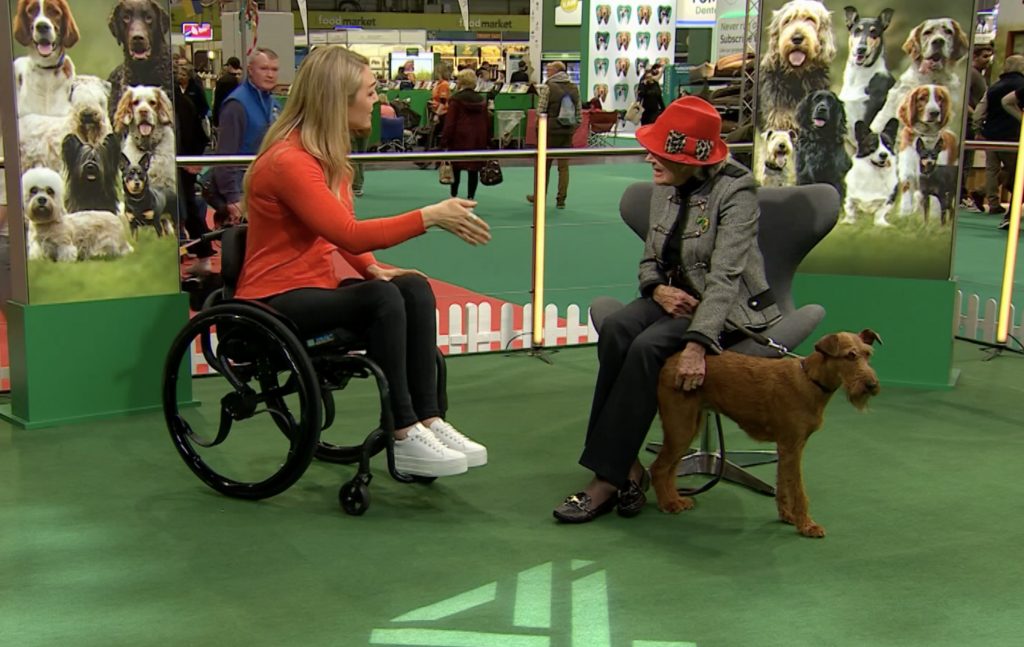 I love being in Stratford, and there are so many memories of the years packing up the car and driving from London with all the old dogs in pairs and in their time. Unlike today, I never seemed to be tired by getting up early to walk them along the banks of the Avon before setting off for the NEC. It all seemed so carefree and easy and the number 7 car park was very close to ‘the right entrance’. The dogs never minded waiting in the car, asleep or watching with interest – a ring side seat, for the lunch break walk, with so many dogs barking and things happening around them – never a dull moment.

Many people exhibiting their dogs had come from abroad or driven miles down from Scotland or Wales. I used to wonder what on earth made them do it? – was it the thrill of the show? or I suppose, the love for their dogs.

I walked around the benches admiring and adoring our ‘best beloveds’, and wishing them the best of luck. I hope my adoration was not overpoweringly apparent!?

This comes with my love to the dogs and a special greeting to all the rest of us.
For we are the happy band who stand beside our dogs, undoubtedly bewitched, but concerned and watchful and ever ready to send up a cheer for ouir beloved Micks.