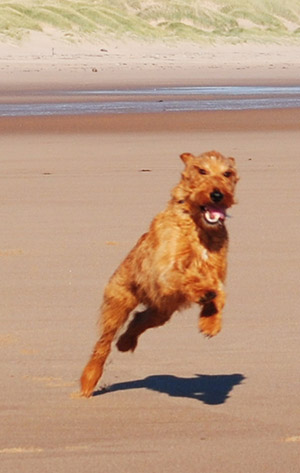 This summer is proving to be one of the busiest ever – with a stream of summer visitors and a great deal of whirling around.

Liberty Belle and I are at home together – alone for the first time in weeks. She’s bored with the endless gardening, there’s little delight in dead-heading the roses and tidying the house is even more irksome. ‘Where are the people?’ my children used to say at the end of a long wet winter Sunday afternoon. ‘No-one’s here.
Well, I’m here and I’ve been toiling on your behalf all day.
But we mean someone else that isn’t you.’
I can almost hear Libbs saying the very same thing.

She’s well and I can’t believe she’s 4 now. She’s full of good cheer and I’ve never met anyone, dog or human, who is more utterly enchanted with herself. There is this small hitch occasionally when the crowd of convivial friends are mysteriously absent for a day or two, but apart from that, life seems perfect. The return to her habitual high spirits happens instantly. She certainly has her favourite people but absolutely everyone is welcome.

I am watching with interest, and some regret, to see her puppy days are over. She’s becoming more canny, more devious and aware of the way her world turns. She’s very quick with words and names are learned after saying only once. She listens to conversations, even on the telephone, and when a familiar name comes up she wags her tail. She knows every sound, the clank of the biscuit tin lid, the click of the gate, and the significance of every gesture – getting out a suitcase, picking up the car keys, putting on a coat. She keeps an eye on everyone and everything and when we’re out walking she keeps us all together running backwards and forwards if anyone gets too far ahead. She can also recognise the route we’re taking from the car window. Springfield Road NW8 has her squealing with excitement as we turn off the main road.

Hunting is the great obsession – far more important now than doggy friends or babies in prams. I thought it was just the chase, but she loitered behind on the sea wall last week and came dashing back to me with something in her mouth. I was appalled to discover a tiny fledgling, very wet and very dead, but without any sign of injury. She’d carried it so gently in her mouth and was very bewildered and contrite when she had a rocket from me. I believe she felt she’d been very clever.

Talking of birds, my dear old canary Mr Bibs (mark 2) has died. He was 12+ and had been wobbling along for some time. He survived the loss in February of his great friend, but he was spending more and more time fast asleep with ‘his head tucked his wing.’ I discovered him one evening struggling in the water pot and held him in my hands trying to warm him. He did recover and was relaxed and dry, but he started to fret and flutter and I knew he wanted to be in his cage. He settled into the corner, tucked himself up and I found him there in the morning. It seemed so sensible and dignified but I do miss him. Libbs and I are down to 2 birds now – Percy and Biggles. She knows very well that they are not to be carried about in one’s mouth and Biggles, who likes to fly about, is watched with some respect.

I’ve been in Germany at my old gymnastic school leaving Libby with Dave and Jeanette, her most favourite people. I was a student in Coburg in 1952 and it was, and has remained, an important and much loved place for me. I so enjoy being there but heaven knows why I can still beat it round the gym. It is embarrassing, and I only hope they’re not saying, as they said of the old Duchess of Devonshire, ‘She’s not just an antique any more, she’s a relic.’

I spent a few days on the way home in Amsterdam with granddaughter Kate, who is reading for a Master’s Degree in International ‘something or other’. I enjoyed it immensely once I’d got over the nightmare of stampeding troops of cyclists – riding with no hands, umbrellas held high and mobile phones tucked into their necks (no sign of ‘elf and safety there). It’s a lovely city, full of energy and excitement, but also curiously relaxed at the same time – and the canals themselves are tranquil enough. Kate is one of Nonny’s children and a great favourite of mine. She makes me laugh and I’m sad that she’s away in Indonesia for the whole summer on some strange field work project. Libby and I miss her already.

We’ve been in Stratford again, this time for the Irish Terrier Association AGM, which was, as always, in Shottery. It’s a long way to drive, but I seem to have cracked the mysteries of the dreaded A34 and mercifully there were no hold ups along the way. We did our walks along the river bank twice daily and Libbs renewed her passionate enthusiasm for the hotel staff, who remembered her from Crufts. I saw an awful production of the Merchant of Venice which was disappointing after the marvels of Much ado and Love’s Labour’s seen in March. Portia in a too tight summer print frock and chunky trainers didn’t quite conjure up Venice, nor did anything else!

The AGM had its usual sparky moments. We’re never dull and it impresses me that, in this world of busy people, there are still some who give up their time to support our beloved Micks. I was relieved to be let off taking Libbs into the knockout competition this year. She always behaves so badly, cartwheeling about and barking loudly. She’s thrilled to see everyone (especially her breeder Ann Bradley) but fails to understand that it’s not a free-for-all dogs’ party. In spite of my protests that she’s ‘such a good girl at home’ I doubt that anyone really believes me.

There was much discussion on a new medical alert. Now that the cracked paws checks seem to be in place there’s a hunt for a possible genetic link to the increased number of dogs of all breeds presenting with liver and kidney problems. I can’t quite understand why so much time, energy and money is spent on data collection instead of improving treatment and searching for a cure. Having been ‘married to medicine’ for a lifetime, the priorities seem to be the wrong way round. Unfortunately, it provides yet another stick with which to bully the breeders into more tests and anxiety over their dogs. Most interesting too was the discussion about the possible connection of lifestyle and the condition – inevitably diet. The big change to concentrated dried food was mentioned. Dogs are not livestock and are natural scavengers and should be able to eat almost anything. Being fed from puppyhood on perfect food could be causing the oversensitive digestions we see in some dogs today. Not by any means the Micks in particular, many have allergy problems – absolutely unheard of even 20 years ago. I was reading the other day that hide Chews, which our dogs love, are full of potentially harmful chemicals…oh heavens what next?!

I was prevailed upon to give a lecture in aid of our local hospice ‘Dogs in the Great War’ with the book Jock of the Great War as the central theme. I never bother to prepare much as, like the rest of my family, I can talk for England if given the chance – just as well really as I was put in the middle of a long rectangular room which involved talking ‘both ways’. They gave me a pole of a microphone, which had to be held out horizontally and very close to my mouth. There was no table, and reading from the book was tricky enough without having to manage lecture notes of which there were none. It’s always difficult to pitch the war books correctly. It would be absurd and disrespectful to make it sound like Disneyworld, but to send everyone home in tears is also not right for a ladies luncheon club. We did say the little prayer at the end, and I managed to keep my eyes dry – a huge relief. It seems to have worked very well and we sold a great many books for the hospice.

We’re planning a complete revamp of the website. Stuart, who is a buff on these things, talks about a more up to date look, more interaction, accessibility of information, speedy navigation, targets, goals, links and capture points, videos and pictures, whilst keeping the best of what we already have! I almost lost the will to live, but I’m sure it will make sense to somebody. Anyway, I’m not given to too much agitation, and trust that the ‘general flow’ will reveal all in time.

One thing is certain – our best beloveds will always be at the heart of it – their health and happiness a primary goal. We’ll put up even more of your letters and anecdotes, pictures and drawings celebrating the joy of living with a Mick and singing their praises to the hills. Well anyway, that’s the general gist of it.

With many greetings and best wishes for happy summer holidays. Love to the dogs,