We’re in Chichester Libby and I and staying in our favourite small hotel which blissfully takes dogs. It’s not on the sea but backs onto open fields – no sign of anything too agricultural but space for Libbs to chase about. Jamie is coming down on the train this afternoon and there will be no limit to Libby’s high spirits. I, alas, have crunched the small toe on my left foot against a wooden garden table and am, what could be described as limping and furious. How debilitating it is to have just one small toe in a state of outrage. I shall be hobbling around at the theatre this evening in my ‘flatties’ and I’m not pleased. We’re here to see Richard Clifford in Amadeus. He’s Bella Jacobi’s ‘other dad’ and they are devoted. Belle is 13 now. She’s doing pretty well and Richard is taking her to France for the summer. He said rather sadly, ‘Maybe this will be the last time as it’s very hot for an old lady.’ There is something so unbelievably precious about one’s old dogs. They weave themselves so closely into a piece of our lives. I think that both Derek and Richard have found loving Bella and being loved by her, a very magical experience.

This letter is being written in haste as I’m away in France next week. Libby will be staying here at home with another cousin and a friend. They have a charming rescue dog called Alfie, and to my amusement and surprise, have had a DNA printout of his forbears. It seems that some dog’s insurance policies ask for a DNA profile. Apparently Alfie has Australian Kelpie, Corgi, Staffie and Collie in his make-up. I don’t quite see the Corgi bit as he’s a large bouncing black and tan chap and at one year is still growing – but that’s what the test says!

Libbs, having recovered from her bite, was stung on the tail by, we think, a bee. She pulled out a great clump of hair leaving a painful raw patch. It was quite a performance and she loathed the cone the vet prescribed to stop her worrying it. She sulked and moped except when she was battering my shins which was a new mindset for Libby. We happened to be in London and the old vet thought it could have turned into wet eczema. To my relief the hair seems to be growing back and she, with any luck, won’t be scarred for life but the silly girl still hunts for bees.

We’ve loved the warmth of the summer garden this year. I spend hours pottering – heavens how the weeds grow – mainly persuading, cajoling or threatening all the old roses dug up and brought down from London. Libby rushes up to listen for further comments when she hears me hissing at them, ‘Come on you can do it.’ It is amazing as they have all survived and bloomed profusely. Miraculous really as they had virtually no roots at all – clean as a fencing post a friend said in dismay – one must obviously never give up hope.

Much as I love being by the sea I’m becoming increasingly aware of the extra two hours that living away from London seems to have added on to every journey I ever make. Libby loves the car and will happily nap gently, stretch, sit up and survey the scene and nap again – now ‘she’s’ not the problem it’s the people with Sat Navs who won’t even allow one to slow down to read the road signs without hooting loudly. If you’re as expert as I am at taking the wrong turn you will know that good navigation is the key to a peaceful journey.

We drove up to Markfield for the ITA Breed show and spent an extra day there walking and picnicking in Bradgate Park. Libbs and I love it. It is a wonderful amenity for the people of Leicester, bequeathed them by a wealthy philanthropist. It was poor little Lady Jane Grey’s family seat and the real joy of it is that it has remained a beautiful park over the centuries. Unlike the London parks, which have now to pay their way there are no sports fields, exhibitions, loud music and roller coaster rides. Libbs had a happy time paddling with dozens of children armed with shrimp nets catching goodness knows what – minnows perhaps – in the stream. The weather was perfect and the show next day was held out of doors. It does make such a difference. It’s always a joy to see the star dogs but as I’ve said many times, I think they should all win.

I’m beginning to wonder if in fact the show ring, apart from the televised shows, is quite the valuable shop window it used to be for the Breeds. They are not, for a start ,as well attended as they were years ago. It is a striking fact that this present craze for cross breeds and the vast numbers being sold has nothing to do with the show ring but would seem is based entirely on the powers of promotion the internet brings.

We sat in the shade at a respectful distance from the show ring. I don’t trust her not to become inspired to join the party and she certainly hasn’t mastered the etiquette! We both enjoyed having little Maya’s company. It is such a delight to talk to a child who regards the family animals (which I gather includes not only Irish Terriers but also goats and rabbits) not just as livestock nor even pets but simply just us. I really love that.

It was interesting talking to the judge, Mr Stewart, about the dogs seen in Scotland and my favourite thing is reminiscing about all the old Breeders. Lunch was embarrassingly not a gourmet fest but I hope it was cheerful enough. The Grutners made up their lovely bitch – well you know how much I admire their dogs – and ‘my Timmy’ was the runner up in the Championship Dog Class.

Having read about the discovery of Richard 3rd remains under a Leicester car park I determined on the way home, to visit the museum. It was not a great success. We peeked at the said car park through an iron gateway but the exhibition is not ready and the whole city is singularly lacking in any sort of direction as to anywhere even how to get out of the place. We’ll have another shot at it next year and I have written to the Council suggesting some helpful improvements. We couldn’t even find the cathedral without walking round several times and then picking our way across a building site.

We had a great family gathering for one of my Jackson granddaughter’s wedding. Sophie is a great favourite and having survived the long drive to Chester I have to say it was one of the loveliest and certainly the longest weddings ever. Libbs was overjoyed to meet up with all her best people.

Poor Imogen was in a great state because their miniature Dachshund had escaped, yet again, despite a fortune being spent on re-fencing the whole garden. He’d been missing already for four days. I need to tell you he did roll up eventually a bit thin and exhausted and with a cut paw. He is an absolute nightmare. Nothing on earth would induce me to offer one a home. Tessie their Irish Terrier adores him but apparently felt rather like the prodigal son – there was far too much being made to celebrate his home coming. As a Breed they seem to me so weirdly ‘autistic’ and completely out of touch. My son Boo says, ‘I can’t help admiring the little basket. He just does what he has to do – that’s his thing – hunting, and nothing will stop him.’ I say, ‘No thank you, Irish Terriers are bad enough but fortunately they love their ‘spot of indoors’ too much to make regular nights hunting in the hedgerows to become an obsession.

Talking of the wedding, Libby loved all the events leading up to it. A cricket match and a barbecue for a start, but she spent the actual day and night with the Christiansons who have a darling Irish Terrier called Spicey. Libby moved in to their lovely house very happily and spent the night curled up in a ball on Stephanie’s bed.

A confession – Jane and I completely missed the time to get this letter off before I left for France and now I’m going home tomorrow. I came away alone in order to finish ‘Bob’s your Uncle’ the story of a dog in the London Blitz. It’s impossible to write at home as there’s always too much happening. I really had to take myself in hand and get it done. It wasn’t easy and very emotional at times. I do so love Bobs and the little children in the story. I always feel bereft when the last full stop means the dog must leave me. I’m not sure how it happens nor from whence they come but I’ve never written anything about Irish Terriers without the dog in the story sitting at my knee.

Dear me, it sounds as if it’s time I went home and joined the real world but Bobs is on his way.

One last thing. I was very sad to hear that dear Cynthia Jackson has died. There will be obituaries I’m sure but I would like to say that she really was one of the world’s angels and I had the joy of knowing her not only as an Irish Terrier devotee but also as a medical wife on the London circuit. She was always charming, interested and so immensely kind. Everything about her was endearingly modest and underplayed but there wasn’t much she didn’t know about Irish Terriers. It is a huge pleasure to be in touch with her son Michael who has Eppie, his own Irish Terrier, and it is a comfort to keep the connection with the family.

I’m now looking forward to going home and seeing the Liberty Belle. Reports are that she hasn’t missed me at all. In fact, I know she probably hasn’t even missed a beat! 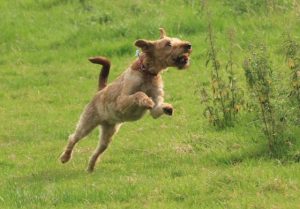 Thistle is our dog of the month!