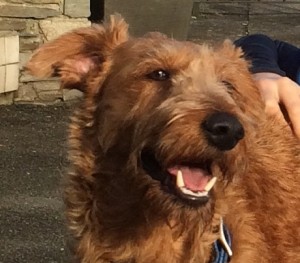 It is January 1st – New Year’s Day and my one ‘good’ resolution is that I must not be late with the letters! No…I haven’t been to the moon and back, but only to the Post Office and back to despatch a great many calendars – plus a fair amount of gallivantinag round the houses, quite apart from too many jaunts to London and too much sleeping off the results of you know what.

Liberty Belle has been a willing and keenly proactive partner in these revels, living up to her party girl reputation. But I say she’s a born networker, she never forgets anyone she’s ever met – they’re all popped on the list and are greeted with delight from the other side of the street, or indeed the park or salt marshes. I stand to one side trying not to look blank and bemused. I often hiss, “You don’t know them, come here silly.” But she’s never wrong and the pleasure of meeting up seems always to be mutual.

She loved having the family around at Christmas and knows everyone of us by name, she launches into her dances – improvised choreography of course, but there are some set- piece twirls and leaps. Parading her battered teddies has become a new divertissement. Poor chaps – they’re a grizzly crew, minus this and that, and often the kapoc stuffing flies about.

She learned very quickly that most friends seem to be coming bearing gifts, often for her, and she’s started looking with happy anticipation at bags and pockets, then sitting down and eyeballing them into a handover. Aged about 4, I announced loudly, when friends arrived and the greetings were taking rather too long, “Now then, shall we have presents.” I do remember the laughter, but I was banished – what a good thing Libby can’t actually speak.

She’s always been very good about the Christmas tree and knows exactly where we’ve hidden the treats and chews, but unlike all our other dogs she has never tried to unwrap them. Zu and Beegie were the worst and even when they were very old ladies, would mount dawn raids on the presents – usually their own. Imogen kept making excuses for them, ‘Well they can see the dog pictures on the wrapping paper, so they know it’s for them – and it doesn’t tell them they have to wait!’

Libby, however, made up for wasted time on Christmas Eve for we did, alas, have a calamity – the worst disaster ever. We had dashed home from London, stopping at a well-known gourmet farm shop just outside Lymington, to collect a delicious pre-ordered duck a l’orange. I’d been away for a week and preparations at home were pretty nebulous. A prepared ‘duck dish’ was a sensible solution for dinner with Jamie on Christmas Day. It was a great rush to collect him from the station, walk Libbs and then tidy ourselves for a drinks party and supper followed by Midnight Mass.

Miss Libbs, particularly after whirling round Brenda’s busy house for a week keeping up with the cats and enjoying the many callers, was not pleased to find herself being left at home alone – tragic looks and crouching in a corner as we closed the front door. We were not home until after 1am and Libby was nowhere to be seen – could she be asleep or just sulking?

You’ve probably guessed what I’m about to say – she’d managed to track down the ready cooked duck in its delicious sauce (I never remember how tall she is) and had eaten the lot, leaving the kitchen as clean as a whistle. Not even a sliver of l’orange could be seen. We found her in the dark at the top of the stairs, sitting very still with her feet tucked up and not moving a muscle. She seemed so anxious and embarrassed that instead of the rocket she deserved, Jamie and I found ourselves coaxing her gently down the stairs murmuring, “Don’t worry, we don’t mind, no really, it’s alright.’ She abandoned her act of contrition with such speed that I did rather doubt its sincerity.

Incidentally, I haven’t been able to face eating duck since we managed to rear a tiny Mallard duckling. We called her Celeste. She was enchanting and I adored her. She spent the first few weeks at the bottom of the canary cage and I’m still teased about turning up at dogs shows with this little spec of life in the car with the rest of the menagerie. She grew very quickly and flew away in the autumn and I hoped and prayed she’d found her friends. She was a wild duck and we couldn’t have kept her in a pen. It was a curious experience and has a strange significance for me – I recall her so vividly. Perhaps after all, I would not have enjoyed eating duck on Christmas Day and I’m sure Celeste would never have approved. I’m writing a story about Celeste and an Irish Terrier called ‘Molly of the Mill’. We had chicken and leek pie out of the freezer on Christmas day – poor Jamie and you can guess who had the leftovers.

We had a very happy time. Jamie is such good company and we saw ‘everyone’ over the holidays. We had several jolly tea parties – I mean proper high tea with cucumber sandwiches, scones, mince pies, cake and pulling crackers. Am I the last person in the world to love afternoon tea above all else? – and with Liberty Belle around you don’t even have to hoover up the crumbs.

I’ve been very touched and delighted to receive so many wonderful cards and letters saying how much you enjoy the calendars. I do want them to be a celebration of our ‘best beloveds’ and help roll the year along –

“Makes me smile or shed a tear”

“Captures the Micks so exactly”

“Can’t face the year without one”

“Love looking back at the old ones”

“I never throw any of them away”

It is a labour of love, in spite of the occasional “Well, I used to think that sending Christmas cards was bad enough.”

I wanted to put up some of your letters on the website, but feel I need to ask first. Perhaps we might agree that all letters may appear unless you ask specifically for them to remain private? Let me know what you think.

There have been a few feisty letters and one recently said I was to stop calling Irish Terriers Micks as it has “racist overtones and insults the Irish.” I pointed out that it was used in the Great War as a term of affection and respect. The Irish Guards still refer to themselves as the Micks, and after all, our glorious lot couldn’t care less. Why, I wonder do some people enjoy feeling insulted? Perhaps it’s some new-fangled human right that’s passed me by?

Jane tells me this letter is long enough. We still do the letter together, which is so very kind of her. We have a great catch up while we’re about it. I think we’d better save Discover Dogs and the gathering at the Animal War Memorial for the February letter and I won’t forget.

This is such a strange winter. Some daffodils are out already and there are sprinklings of daisies on every patch of grass. But the rain – heavens, the rain it raineth every day.

One last quote from Stephanie in Germany, “I’m going to say this just for once. I love your letters – so vivid, so amazing, so beautifully written, so nice. Just like our beloved Irish Terriers.” Now I do know that’s way too kind, but it’s made me smile and thank you anyway.

With many greetings and all the best for 2016. My love to the dogs.