How fullish I was to imagine that the year 2020 had an auspiscious ring to it. Except for the War years it has so far been an litany disasters — the bitter scrapping over Brexit ( I have to put my hand up for that one) the floods, the terrifying bush fires in Australia and now ‘the Virus’.  Well at least it has given poor little Greta a break from her pasionate preaching to the converted. I don’t seemed mind about being under house arrest but then it is like most things easier to manage in Lymington where life has a slower pace — and people are embarrassingly  kind. We had days of glorious sunshine — spring weather at last after endless rain and where are so few people around and fewer cars of course.

Libbs and Marybell are as irrepressible and cheerful as ever even though they do look like those hairy Ireland catle minus the horns! They lifes are fairly unchanged as Marie still walks them doring the week. She is a charming gently soul and never admits to any misdemeanours from you know who’s “We don’t tell tales” she says “besides they may start talking about me.” She’s just 21 this year and we all love her dearly. I take the girls out  along the sea wall and we chatter together and play our silly games…. this is where’re lob pebbles – this is where we chase each other — this is where we paddle  — they know it all and it never changes. Our friends call “hello ho” from the gate and Libbs and Marybell rush to squeal and do their best kangoroo jumps at the gate, the rest of us that’s me wave and sway  and hug ourselves crossed hands on shoulders and blow kisses — good heavens!I wonder what my grandmother would say if she could see us.

Mercifully we’re all a little deaf and I can’t actually hear what anyone is saying but I can lip read ‘ Are you alright?’ and turn up the head nodding in reply.

Now the truth is I’m rather enjoying not having to rush around. My diary is a serious ‘cross out.’ I absolutely love the garden — who cares about battered finger nails and stiff knees and the birds have always anchanted me. Apart from the robbins one at the front and one at the back my latest companion is a dark very stout mistle thrush. I thought at first that he was large blackbird hen  and wondered why she had not joined the sister hood and not tried to build a nest and then dawned on me that she was a he and a different thrush. I look forward to hearing his song which is lovely but not melodic as a blackbird.

Crufts was so much easier for me this year. I left the dogs at home and they had a lovely time staying with Dave and Janette — their house hold has very  few rules to spoil their fun. It was rather cold on the first night and Janette decided to make up the bed in front of the living room fire it’s an old trick to save heating bedrooms upstairs. Libbs and Maryb assumed these arrangements were made for their comforts and convenience and nestled in it at once. When Dave come down with his dressing gown there was he said “not a flicker of life ” and we had to squeeze in beside them. It’s called striking a deal and sharing.

Meanwhile  I had a driver to take me to Stratford and went to the theatre that evening — Shakespear’s King John . The King was played by a minute actress with the crown that seemed to be held up by her nose.  My heart sank , should I scarper before it was to late . Fortunatly I stayed and it prooved to be wonderful evening full of innovation and best of all, I could hear every word .

Crufts was magnificent — everyone should visit once at least . I do so admire the way the Kennel Club comes upo with new ideas year after year. I have spent 4 days at Discover Dogs and the Micks were in fine fettle and full of cheak and charm  and enjoying the ‘showing off’. We did have a lot of fun

Rosemary Smart the recently retired  chief exhecutive of The Kennel Club (who absolutely adores the  Micks),  spents  a long time playing with Freddie who is still a puppie and very funny and  full of himself. Rose says “I will always remain and ambassador for the Kennel Club but now I will enjoy all the treats and avoid the hassle.” She has been a huge asset and initiated and managed the monumental move to the other end of Clarges Street. It is a beautiful building in such a good place to meet, Rose has become a very dear friend and I so respect her complete commitment to the welfare of dogs and undying love for them.

I was going to end on the a sombre note having received some terrible information about the plight of dogs and other animal in the Chinese market. But it has made me weep all morning and I can’t face it and besides and we all have enough to manage for the moment. I am sitting in the sunshine and have dried my tears, Richard has sent a picture of a walk with Daisy in Regents Parks. She has been a little monkey running for the hills when it’s time to turn for home. It does make me laugh.She seeks them out hidden behind a tree and disappears again. She is only just 2 and is entitled  to the odd spot of naughtiness! 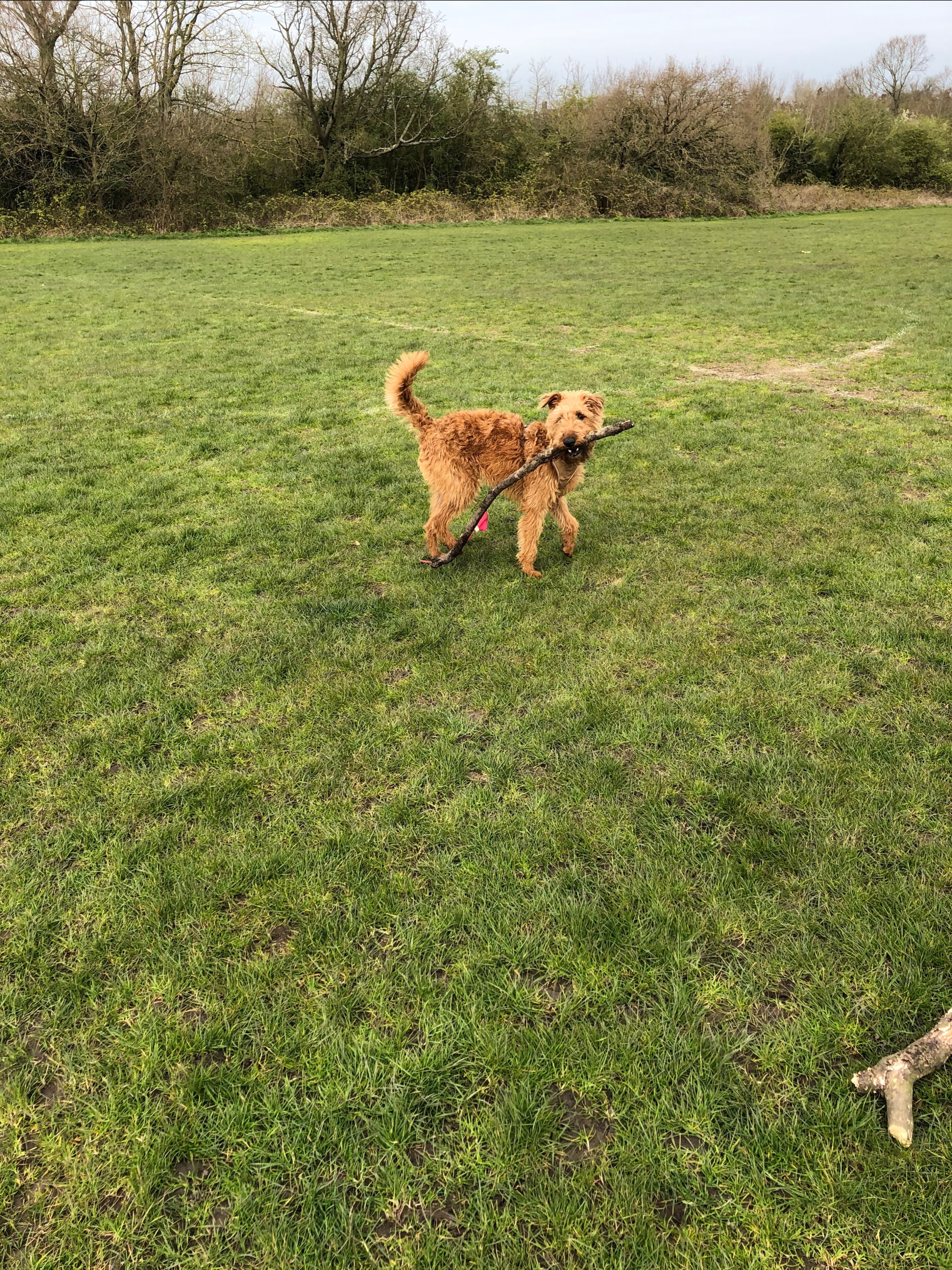 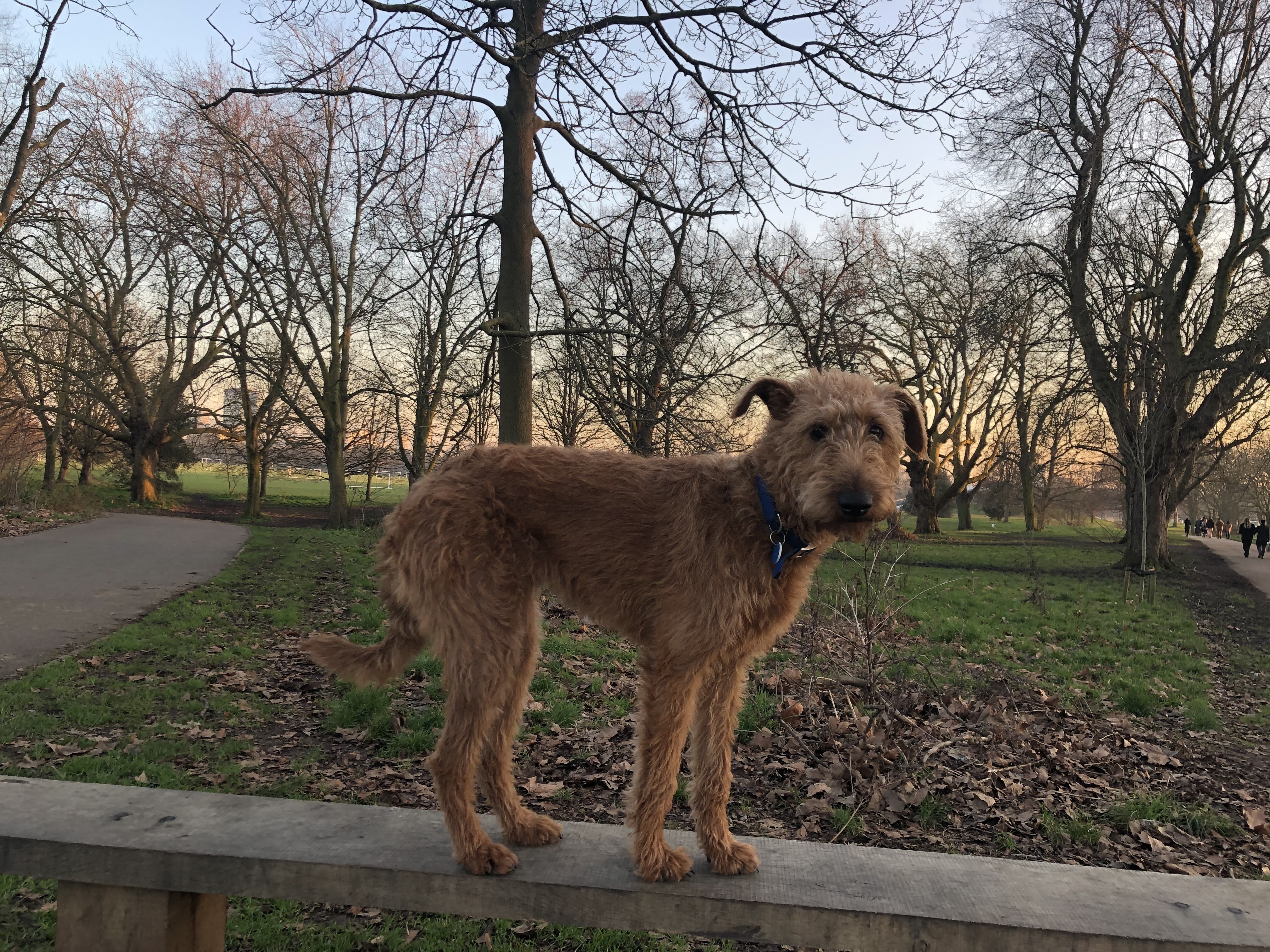 My very best wishes for all our health and happiness. Politenes does help and any confined space! I used to say to my children “I’m not interested in how much your school friends love you, I’m only interested in how polite you are to  Ian and me.”

Many greeting and my love to all