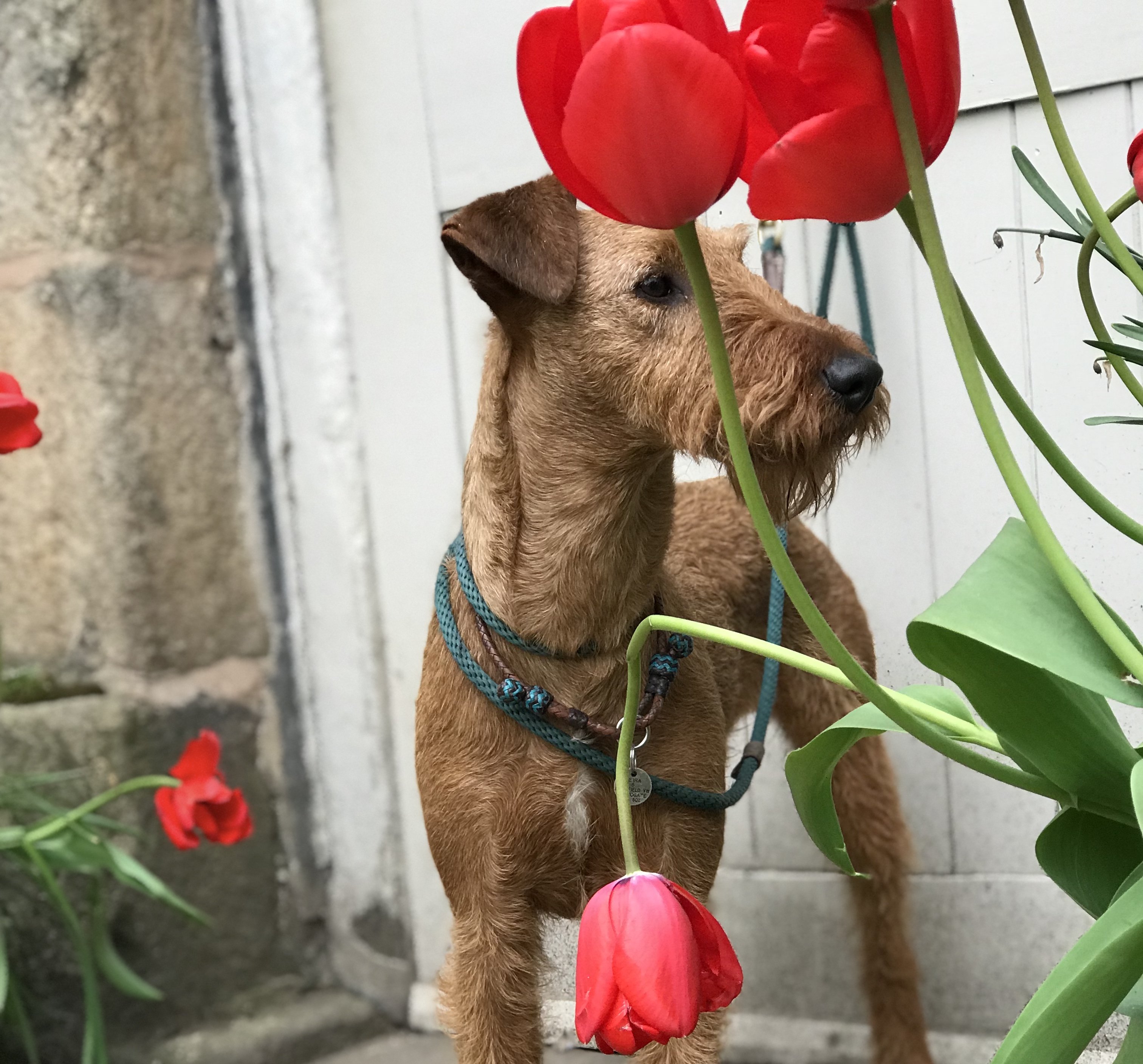 We’ve had the most peculiar ‘stop-and-start’ spring with temperature swing so extreme that one trembled for the birds and their nests, but still they keep on singing, quite remarkable. The daffodils had a time of it too – up to their necks in snow one week and frizzled and dried out in a heatwave the next.

Libbs is, of course, a fair weather girl – dislikes the wind up her skirt and hates the rain. With Marybell leading the charge (and she is ‘the boss’ and doesn’t give a toss about being drenched) Libby has become less of a weather wimp and an aquaphobe and she almost joins in with the splashing canter along the shoreline, but looks back at me quizzically, ‘I’m only amusing our baby’.

Our baby has become very wild, wayward and naughty. She has a great friend, an enormous brown Labrador who’s part of the dog-walking club. I keep complaining that he’s too big, too strong, has no manners at all and is turning Marybell into a complete hooligan. She’s not fit, anymore, to play ‘nicely’ with all the dear little poodle-doodles we meet on the seawall and in Regent’s Park. I’m assured, however, by Louise and Cat, who walk them all twice a week, that she leads him on and he’s the one who finally quits and runs for cover.

She excelled herself this morning and slipped out of the car as I was arranging the silver heat shield on the windows. She made a beeline for the automatic door of the Marks and Spencer’s Food Hall and disappeared inside. By the time I’d legged it across the car park, the party was in full swing with Miss MB entertaining the crowd. She ducked away as soon as she saw me and had to be retrieved by the manageress and her new best friend, a charming young woman, who then helped me man-handle her back to the car. I felt honour-bound to return and apologise and was given a penny lecture by yet another manager on the need for sound hygiene, spelled out very slowly and carefully in words of one syllable.

I might have delivered a riposte myself, but the children gathered round, ‘can we come and see her again? She’s so funny’ ‘Well yes’ – but I thought we’d better remove ourselves before anything worse happened.

I am aware that she’s hit the moment when the rules need to be tightened up, she’s far too pleased with herself and life in general and seems to think that obedience has no relevance whatsoever and definitely does not apply to her. Now I would never insist on total, complete obedience, that would be embarrassing, but I would like a few faint signs of contrition. I have to say she was rolled over by a large Pointer, a great friend called Becky, who pinned her to the ground. Libbs and I sprang into action, but Marybell jumped up at once and went on playing as if nothing had happened.

It is difficult to be too cross with her because it upsets Libby who seems to feel responsible. It does remind of my daughter Lala who, as a small girl, would always burst into tears if her younger brothers were in trouble over some outrageous misdemeanour, such as shaving the little box trees with their iron spades, leaving a small stalk standing.

Talking of ‘the boys’ one of my sons, Julian, always referred to as Boo, is walking from Land’s End to John O’Groats, raising money for eye-research. He is blind and it is a huge undertaking, but an adventure, which he and ‘the team’ seem to be enjoying. Do have a look at his website: bigblindwalk.com. You may have seen him on Countryfile on Sunday 29 April.

I’ve met Derek and Richard’s new puppy, Daisy. She’s one little piece of heaven and they adore her and so do I. We didn’t speak of Bella and one can but hope that the pain of losing her is healing at last. 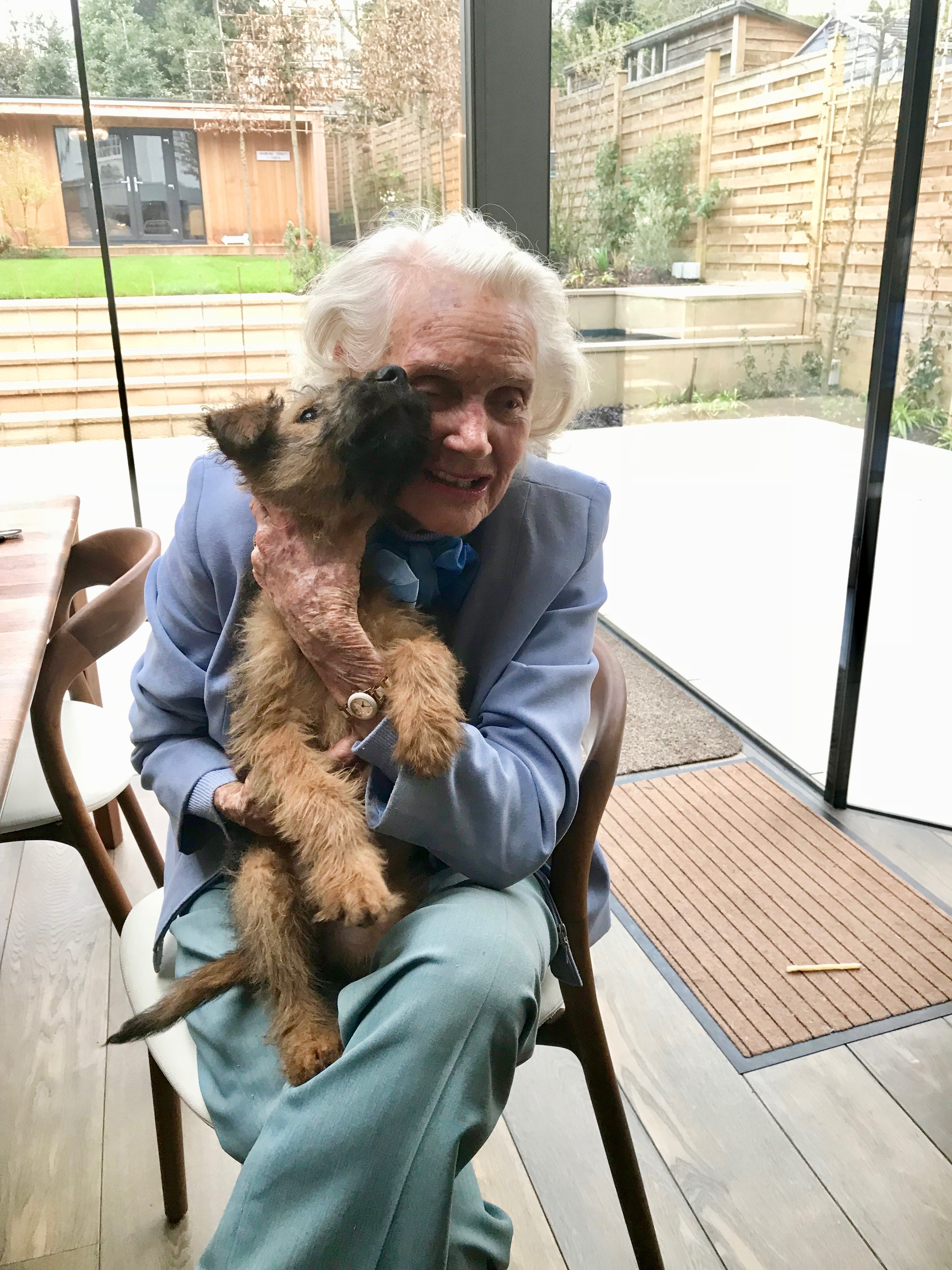 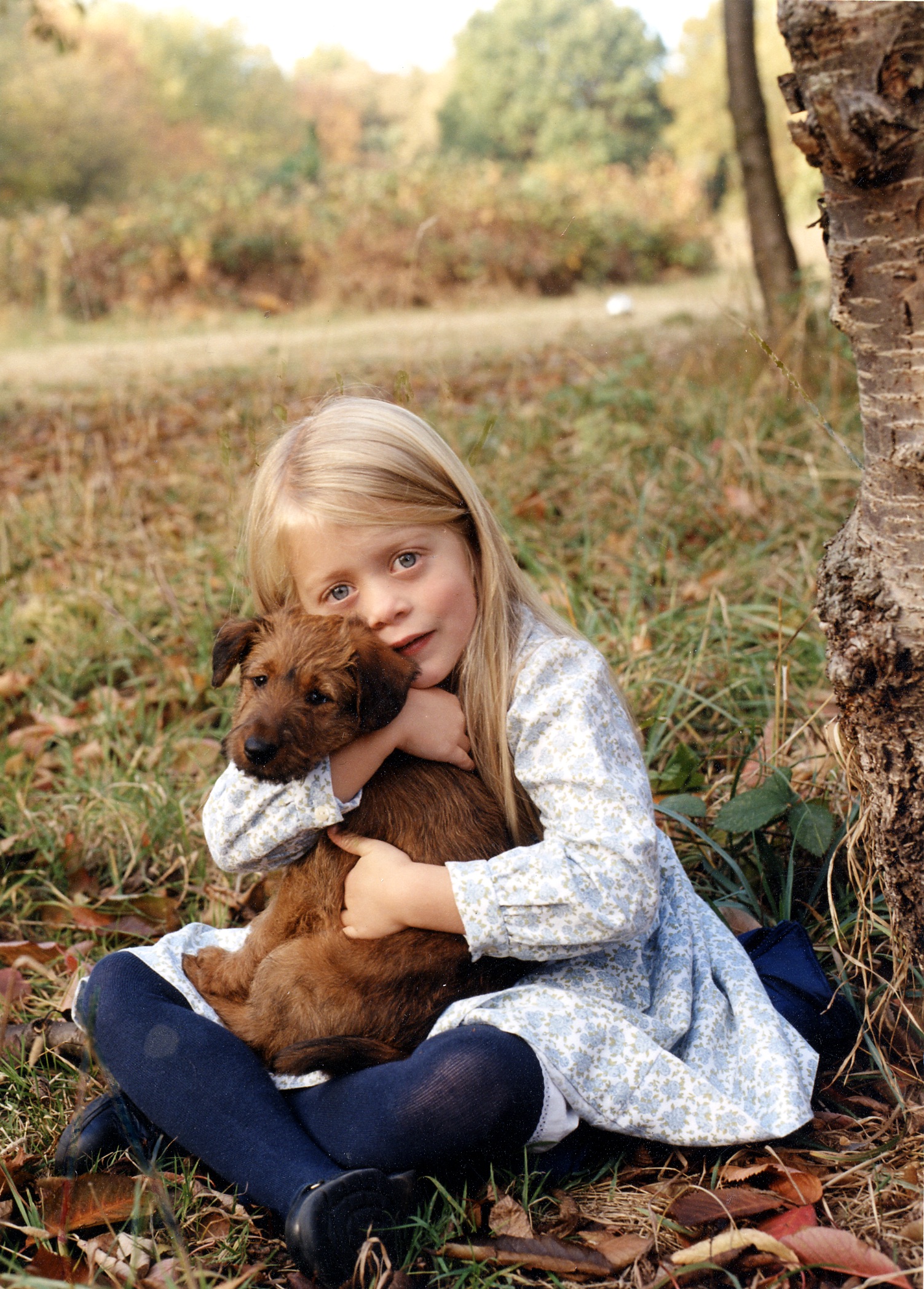 Our beloved Tess, aged nearly fifteen, died just before Easter. She is ‘Miss May’ in this year’s calendar and was my granddaughter, Imogen’s, darling girl. We all understand the terrifying grief and I won’t write about it now. We did light the candles and open a bottle of Champagne on Easter Day, which seem to help banish the tears for that moment at least. Tess was Zuli and Beegie’s baby and she was indulged and adored; they give into her every whim. This is the piece I wrote for her it is Zu and Princess Bega talking, but they spoke for us all! It’s called Tess of the H Jacksons: 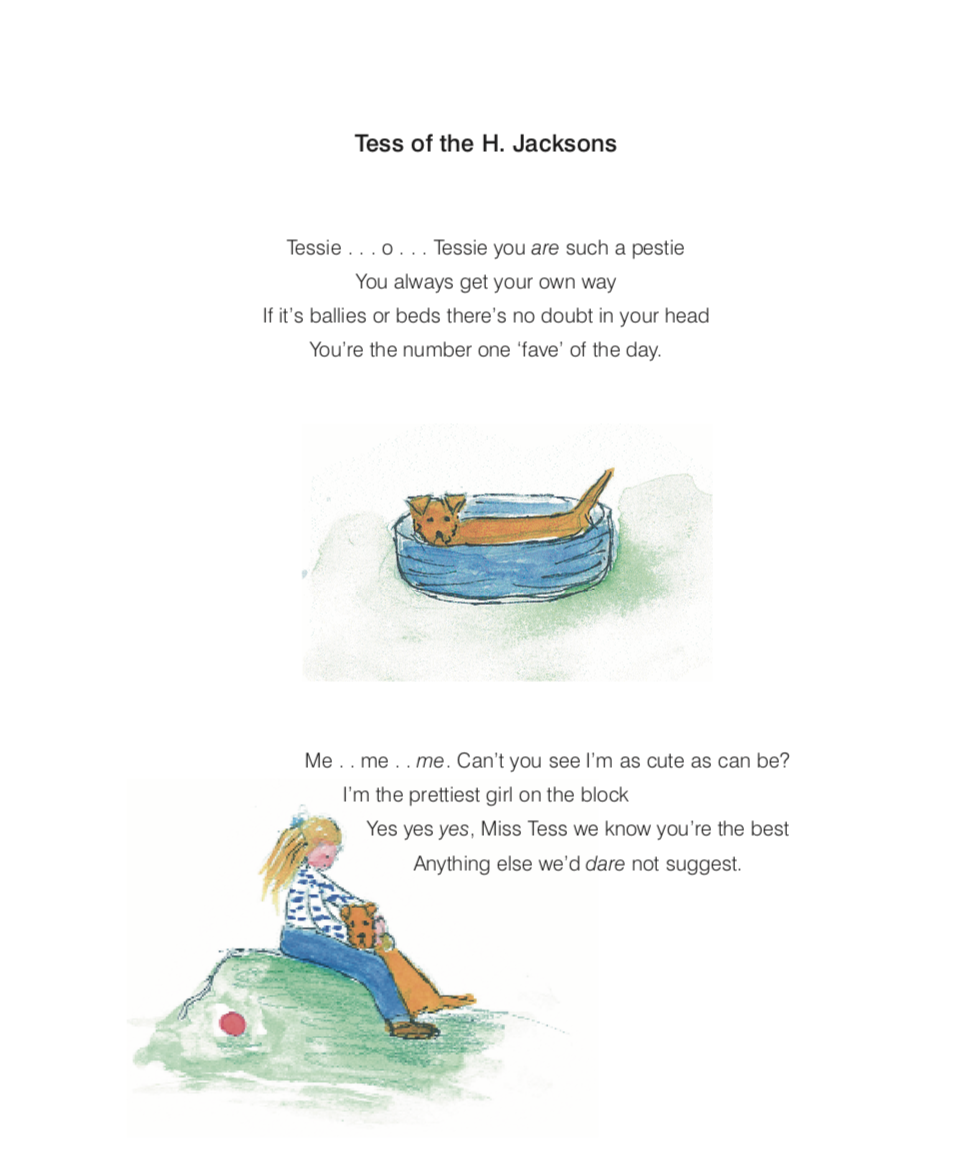 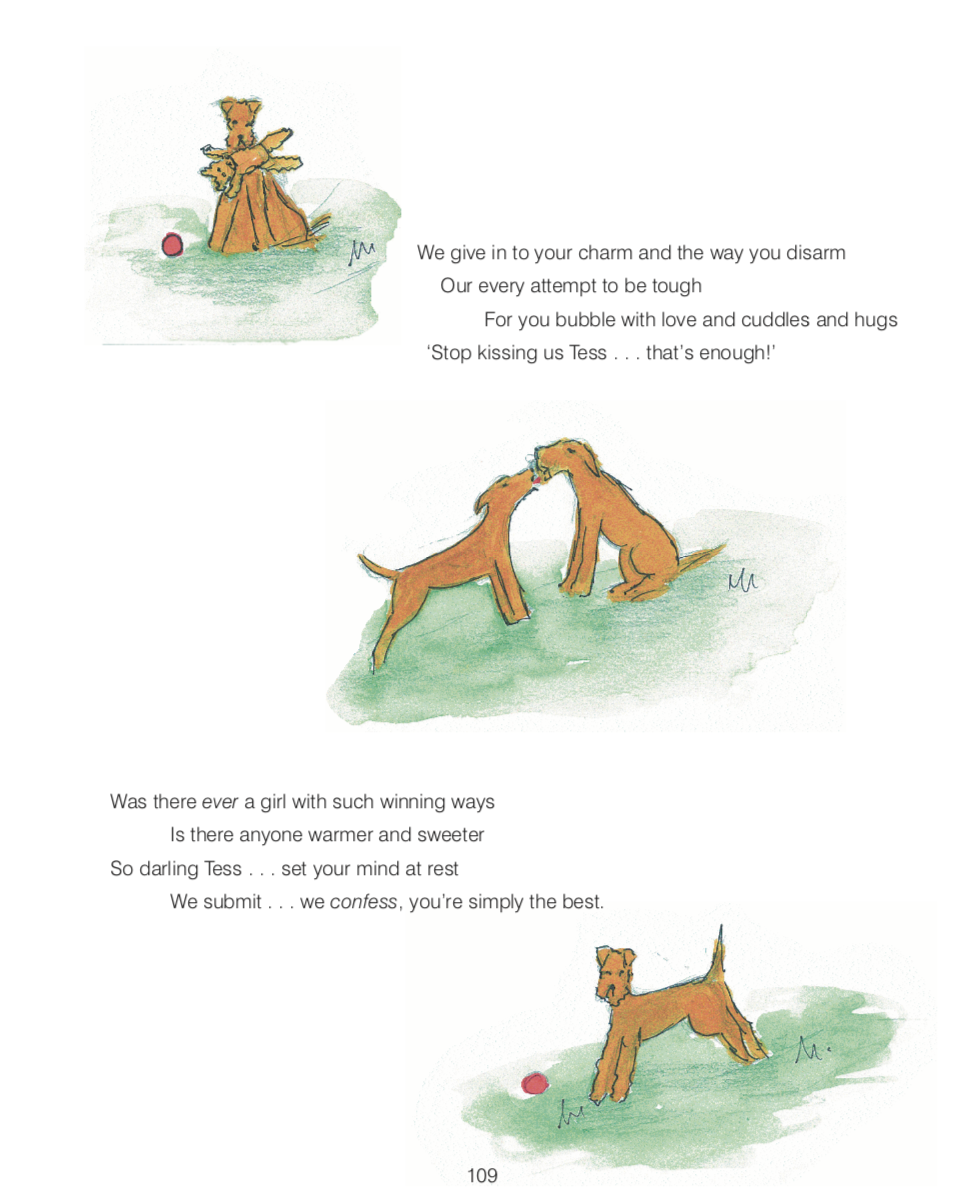 From: Walking in the Water Songs for Dogs

I’m sitting in the sunshine writing this letter, it is late (again), but my son James and I have been on a quick week’s visit to New York. It was very joyful. Jamie is excellent company and we met up with old friends and ‘did’ the town. Most memorable was a ride in an open carriage around Central Park, clip clopping along and wondering at the scale and beauty of it all. Our coachman was Irish and what do you think we talked about? Why the Micks of course!

The geese have long flown, I miss their creaking cries and I’m longing for the swallows to arrive. I haven’t seen any yet, but Boo, on The Big Blind Walk, said a friend spotted three diving overhead somewhere near Tiverton. I do hope they’re on their way.