Is there anything more beautiful than England when the sun shines? The days this week have been ‘so cool, so calm, so bright’ – like some sort of heaven…except that it always triggers a wild gardening mania in me not shared of course by Liberty Belle. She likes to sit inside the nearest door, tucked up on a soft carpet, but keeping an eye on things. Now true, she does arrive with tennis balls and toys to be hurled around, but flees indoors if I lay hands on the hose just in case she might be in line for a spray down.

The geese have disappeared on the salt marshes. At the first sign of warmer weather they vanish overnight. We miss their creaking calls and are waiting anxiously for the first swallow to swing across the sky.

Now Crufts… You have probably all heard, with the rest of us, that the poison found in poor Jagger’s stomach was too quick acting to have been fed to him at the show. It does not make the whole episode any less sad, but what a blessed relief for the Kennel Club. I wonder if they will ever know, or find out who was responsible?

We had a very jolly time at Discover Dogs with a mass of new ‘callers’ interested in the Breed and even more old friends and Irish Terrier devotees, who come round every year to our huge delight.

We all swap stories and there is a lot of amusement, but inevitably there are always some tears. I remember vividly when our beloved Miss Bunch and Becky Price were put to sleep just the week before Crufts. They were 14+ and although not related, both developed heart problems which, curiously, became more serious on exactly the same day. They were devoted friends and it seemed right they should go together. Dreadful for the family, but please don’t ever write and apologise for weeping on my shoulder. My sympathy, should it be of any help, is more than profound.

It is a real undertaking to set up the booth for Discover Dogs and the Bamseys are a joy to work with. Dexter and Libbs kicked off and were on parade on the first morning. They are a rather large pair, but very beautiful and very charming welcoming the crowds. Libby was thrilled beyond all sense to see Timmy (now called Monty), who was a stud and Show dog at the Montelle kennels where she was born. She must have recognised him and was as ecstatic as she is whenever she sees Ann Bradley. They do seem to have astonishing memories. Timmy / Monty however, was distinctly underwhelmed. It was lovely to see him, now retired, so happy with his own family.

All the dogs did wonderfully well and it was a pleasure to see the Hydes, who come up from Wales – even though they’d left Shannon behind. She’s a great favourite of mine (and her mother’s) but I do think it was wise as it is definitely the younger dogs who enjoy the crowds, seem less exhausted – and the puppies of course have great fun.

I did manage to dash down to watch a bit of the judging, especially to see Ann Bradley in the ring. She’s such an expert and the dogs all adore her and seem so relaxed in her hands. The Von der Emsmuhlers were very successful, but I’m always sad for the ‘non-winners,’ who to me seem equally beautiful. Knowing how much time, expertise and devotion go into presenting every dog makes it even more unfair. Yes, I do know that it is a necessary shop window for the Breed and I’m full of admiration, but it’s not my best thing.

I do enjoy the little corrections you send in…Quite right. In last month’s letter it should have been ‘wring’ (as in wringing your hands) not ‘ring’ (as in ringing a bell) – well spotted. Sorry, Jane and I had a synchronised lapse.

Our booth at Discover Dogs was much admired and we were told in advance by one of our ‘friends’, who knows about these things, that we had won the first prize – he even told us why which was very flattering. Imagine our dismay when he arrived half an hour later to say we had not won and there had been some sort of mix up. It was even stranger when another official rushed up as I was sneaking away early saying, ‘Don’t go yet. The Irish Terriers have won again.’ We’re all good sports and took it on the chin. Huge thanks to everyone for a very polished performance and special thanks to Ian Bamsey, who not only set up but packed up as well – it is no mean task.

I went to the theatre in Stratford several times. The new building is very impressive. They seem to have every new production trick in the book. There’s a massive tracker stage which rolls forward to change the scenes and makes for a very speedy, fast moving play. The Company is so athletic and versatile…they all seem to sing, dance and tumble with such expertise…back flips and high kicks one moment and acapella singing in umpteen parts the next. I’m not sure whether the play struggles to be heard.

Libbs and I have started our run of summer visitors. We both enjoy our family and friends coming to stay, but Libbs, as ever, makes no attempt to hide the fact that I am too tedious to bother about. Jamie says she’s a political animal. She so loves the children, and their dogs, and is only concerned with not being left behind when they set off on an expedition.

The funniest thing is the way she sidles off and hides behind them whenever I am presumptuous enough to as much as ‘appear’, but I am sad for her when they leave, especially my son Jamie, when she takes to his bed for a recovery time. She emerges only for the next diversion which might be a pigeon on the lawn or her friend Alfie passing the gate which would require her supervision.

We did our whirl round London. It seems to work out at a week in every four or five, and although we both love the change of scene, coming home is even sweeter. One of our very dear friends in Springfield Road has ‘a brown mouse in house’…or several perhaps. Liberty Belle took over at once and went flying around with her nose stuck to the skirting boards, puffing and snorting in the corners like some sort of hoover. I’m not sure whether she’s ever met with a mouse but she even followed the trail upstairs, which became embarrassing.

I do hope that everyone had a Happy Easter. I meant to do a card this year but failed…although we did hang the painted eggs on a budding branch which is always a joy. Like the Christmas decorations, everything in this house has been mauled or munched by generations of our best beloveds. I don’t mind in the least, and feel that they are all still here with us and part of the party.

P.S. There are some charming pictures of Penny surrounded by her Easter bunnies. We’re putting them up on the puppy page but Julie, we don’t have your contact address. If you could email it to us please and thank you for the pictures. 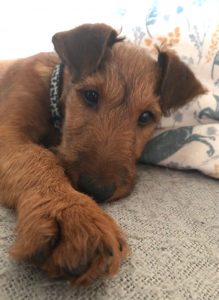