Summer on the beach with their best friend Inzee. 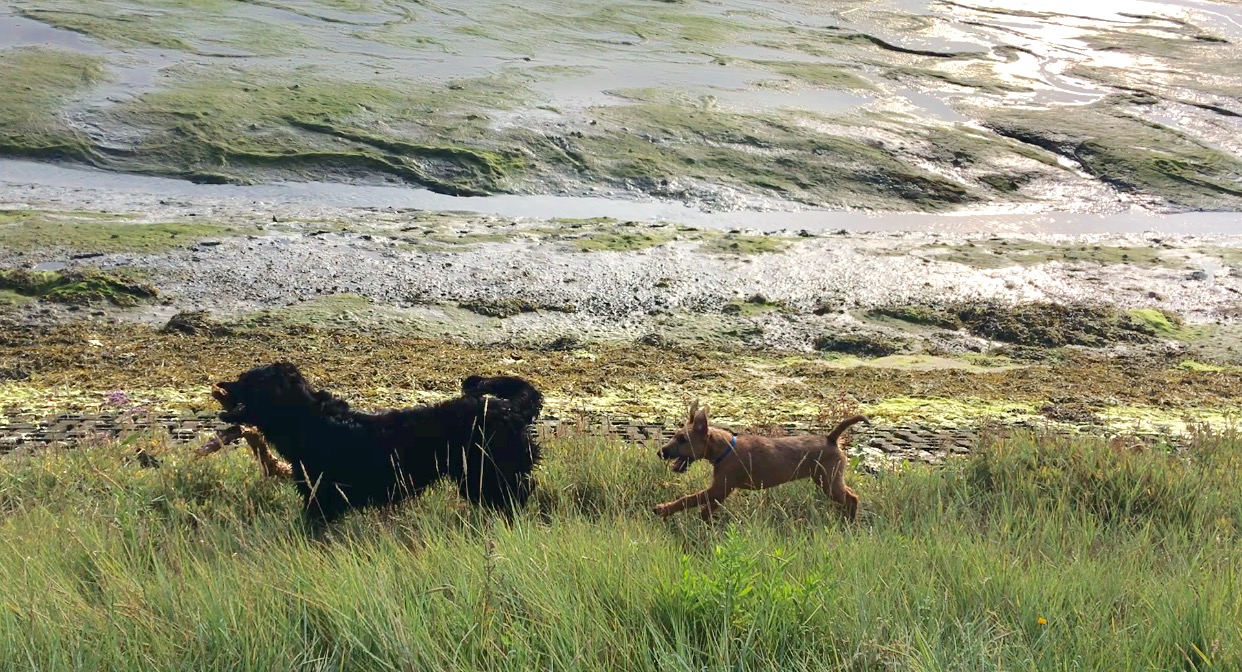 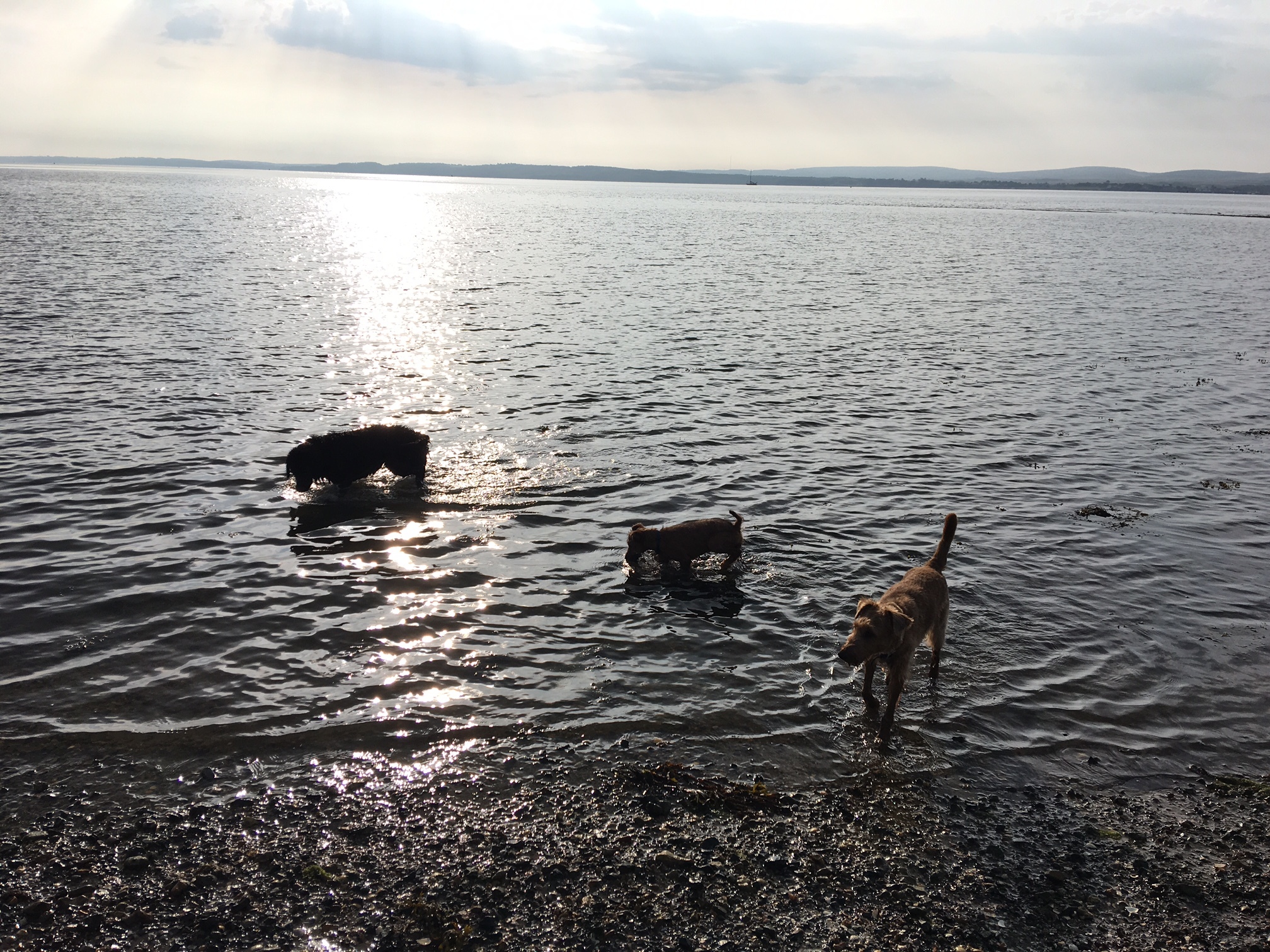 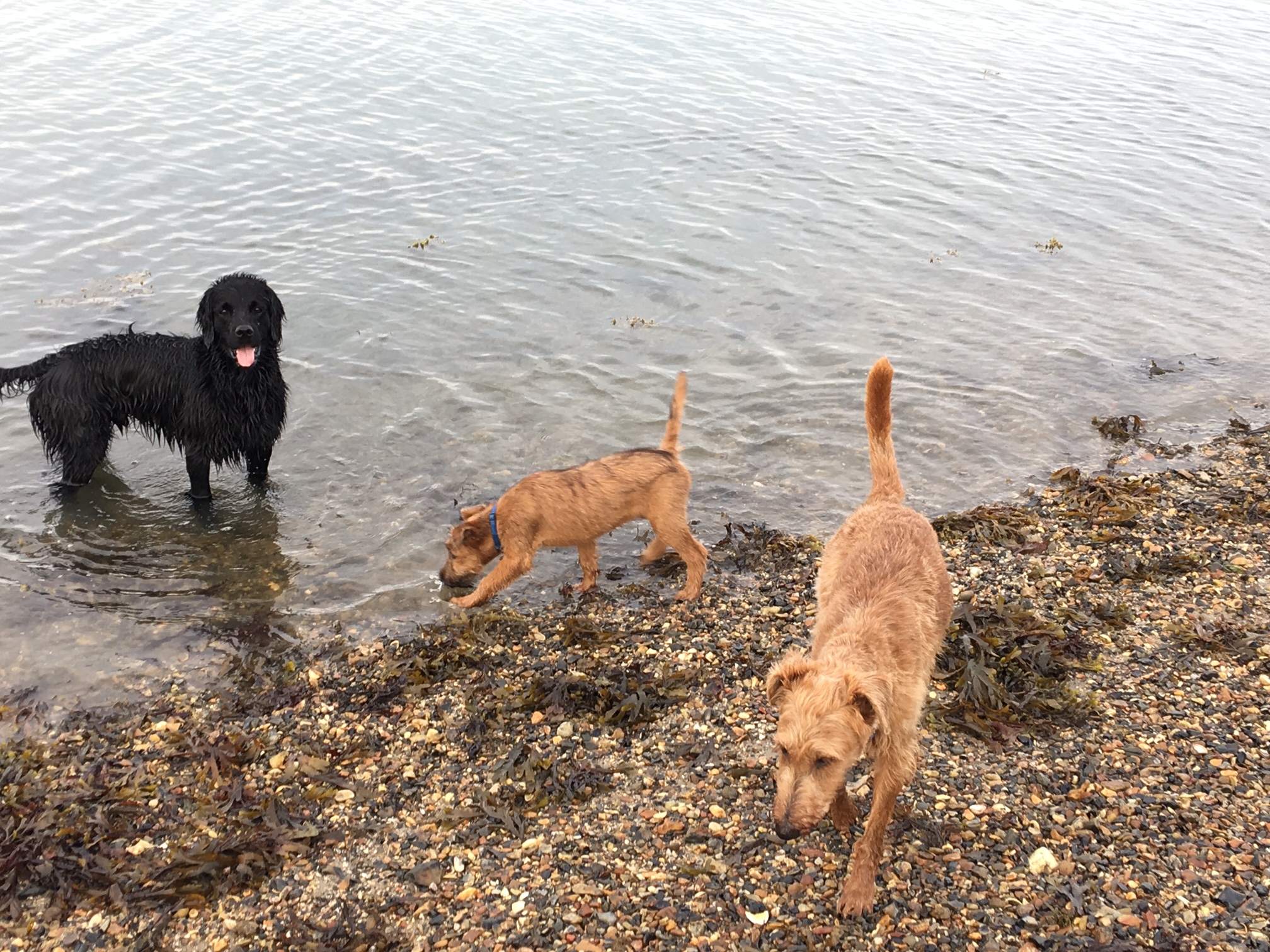 I know that the summer is over, not because of roses, which had their best summer “show ever”, are now bedraggled and covered in black spot. It is because the sea asters have strewn themselves in their thousands, over the watery banks of the ditches and ponds on the salt marshes. Their colour is pale lilac blue — exquisite in the autumn sunshine. They are probably even more lovely than the bluebells and lead us gently into the time of red berries and jingle bells. Please forgive  the rhapsody, but I’m paid up flower fanatic — it’s not just Irish terriers.

We have two little rascals whirling through the house — yes Marybell and Daisy. It matters not how long the walk, how large their dins or how short the afternoon nap, they never seem to be still. Sometimes I think they wait until I’m talking to my accountant or some such which gives them time to set up the demolition project. When Jeanette arrived to ‘do’ the house this morning I heard her saying ” Oh my ‘oly aunt what ‘ave been up to?” The answer was every toy tipped out of the box (again!) and two mutilated ping pong  bats (just toys not a real thing) a table net shredded to look like a spider web and six squashed ping pong balls. They were very keen to help to clear up (according to Jeanette) who always makes excuses for them .

But they wisely vanished in to thin air in the garden, when I appeared swinging my arms around like a one man wind farm. They reappeared eventually ‘all smiles ‘ oozing charm — “oh really did we — well I never did.”. They remind me of my son Boo who was a master of disaster — a sort of Macavity of the child world. After every calamity (and there were many)  he’d explain ‘ twinkling like an angel, of course ,” Well you can see I’m standing over here — my hands are behind my back!” I think he reminds me of my adored older brother, Ronald who was just as bad. He always had some daft scheme that never quite worked. It always began with wild enthusiasm and ended endangering our lives!

I wrote Billy and Monty for him and his dear Jocky boy, his Irish terrier . Have a look on the video page for Adele’s film using the original pictures and read with great wit by Richard Clifford. It will make you laugh. Look too for Joanna Lumley reading ‘Love song’. She reads it so beautifully and Adele has again used original drawings.

Emily wrote to say that their Brocquy their adored Irish terrier had been put to sleep. He was a most wonderful boy so much a part of the family. He was in on everything — Best man at their wedding and loving guardian and play mate for Constance and Nancy. They spent their summer holidays in Devon with Brocquy the king of Woolacombe beach.

I wept when I heard  that Constance had read ‘Love song’ for him when they  held a little service for him on the beach. It is so touching to think of it. We do send them our dearest love.

We have had a summer with weather more sunny and hot than we might have expected. But I’ve been troubled with the  dilemma over Brexit and amazed at my own fury with anyone who disagrees with me. Even my annual dance round the television with the dogs, on the last night of the Proms (we can do a nifty Sailors Horn pipe) was ruined by the flapping EU flags handed out at the door of course! And then there was a terrible hurricane which hit the Bahamas. My dearly loved stepdaughter, Annabel lives in Nassau and there were days of anxiety. We must be grateful that we were at least spared the dreaded hose pipe ban –a small mercy , no doubt but I do love watering on a summer evening, communing with the flowers and thinking of that ‘gentle falling rain’.

I managed to get to the Fun Day but had to leave Libbs and Marybell at home. Managing them in London has become too difficult. Brenda now has six cats and one enchanting puppy called ‘Sunny boy’ . Much as love seeing them all I really can’t add the girls to the mix and add to the general chaos.

Sunny was very ill last month and had to be rushed to the veterinary hospital with some sort of poisoning. They said it could have been slug pellets, but no one can imagine where on earth he could have  picked them out — poor little chap. He is a collie cross and bright as a button.

I loved the Fun Day , but so miss my Beegie — she was born to play games and was greedy enough never to lose a sausage race . She was so unintentionally funny too — unlike Maryb  who puts on a comic act to make us laugh . Beegie just didn’t bothered to think to much or plan anything — she swung  along is Zuli’s wake just enjoying herself. This is a piece I wrote for her. 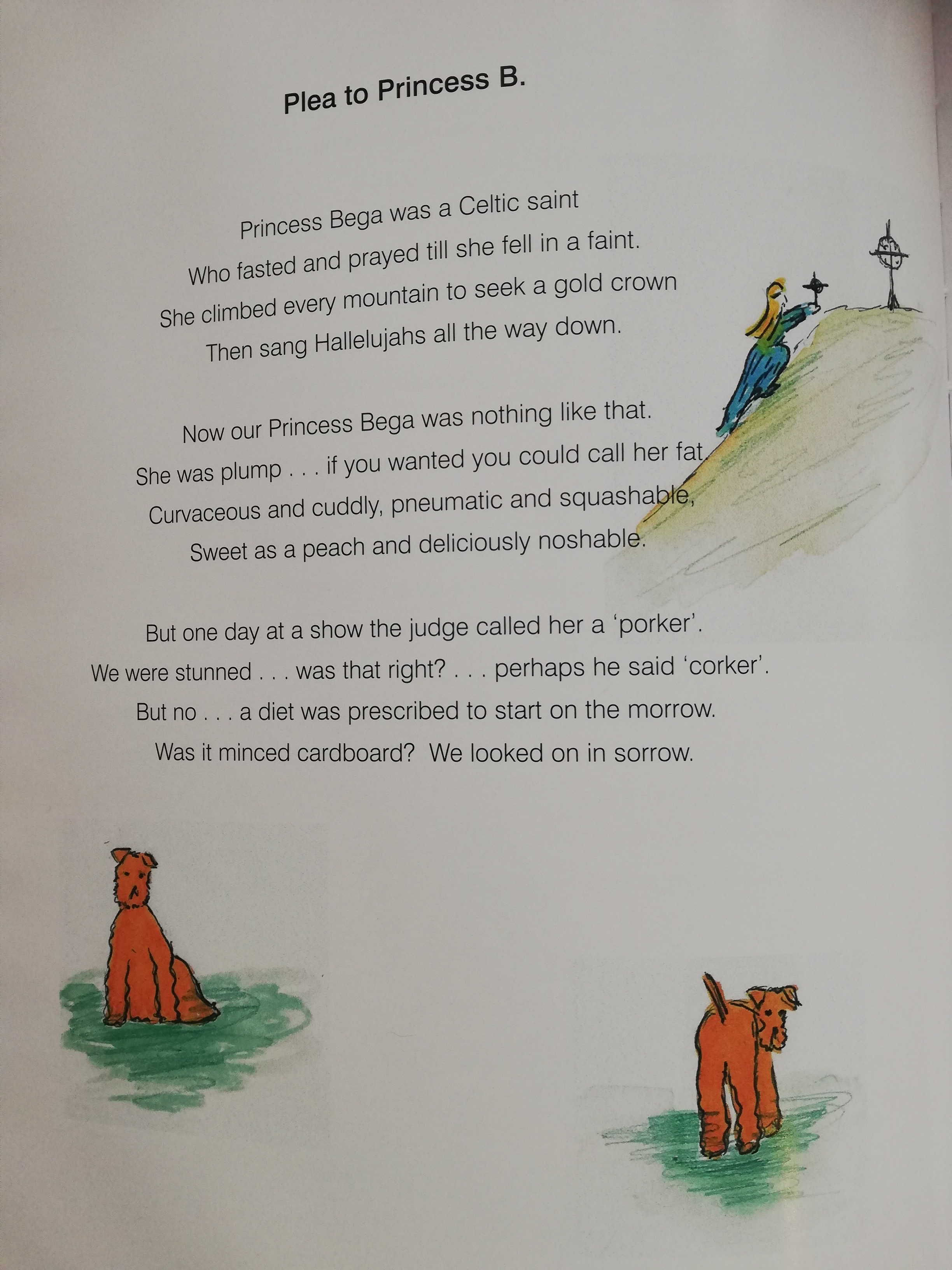 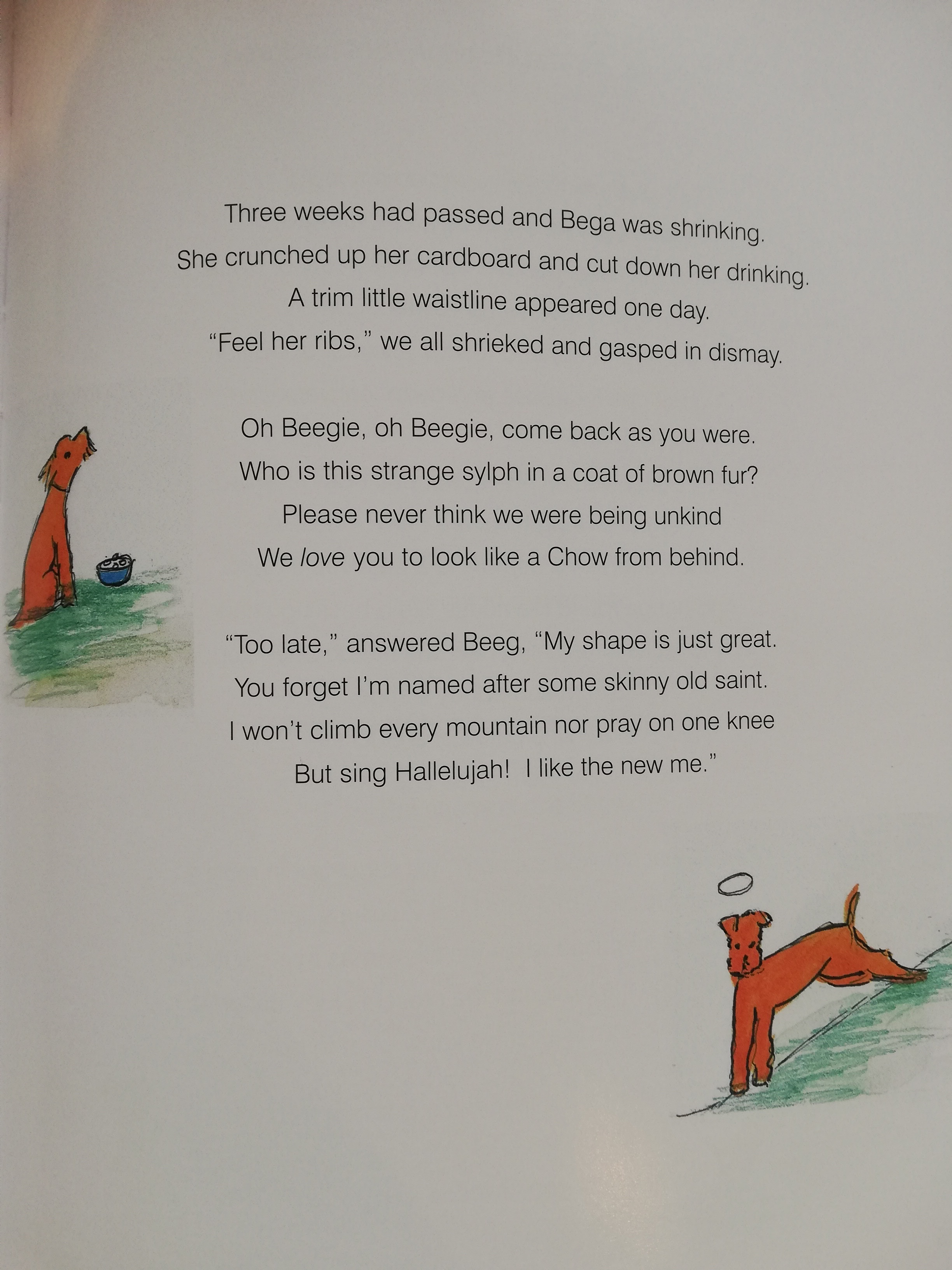 I have to save the rest of the news for the next letter . I haven’t been abroad this year but seemed to be busy enough –far too much to talk about. One real joy is that I can walk all three dogs (Daisy is here for a month or more) on my own and feel confident that I can manage. I enjoy seeing them racing and happily playing together. Daisy had half a dried out cow pat sticking out of her mouth this morning . Having eventually persuaded her to give it up, Mary bell run off with it — more shouts for me. 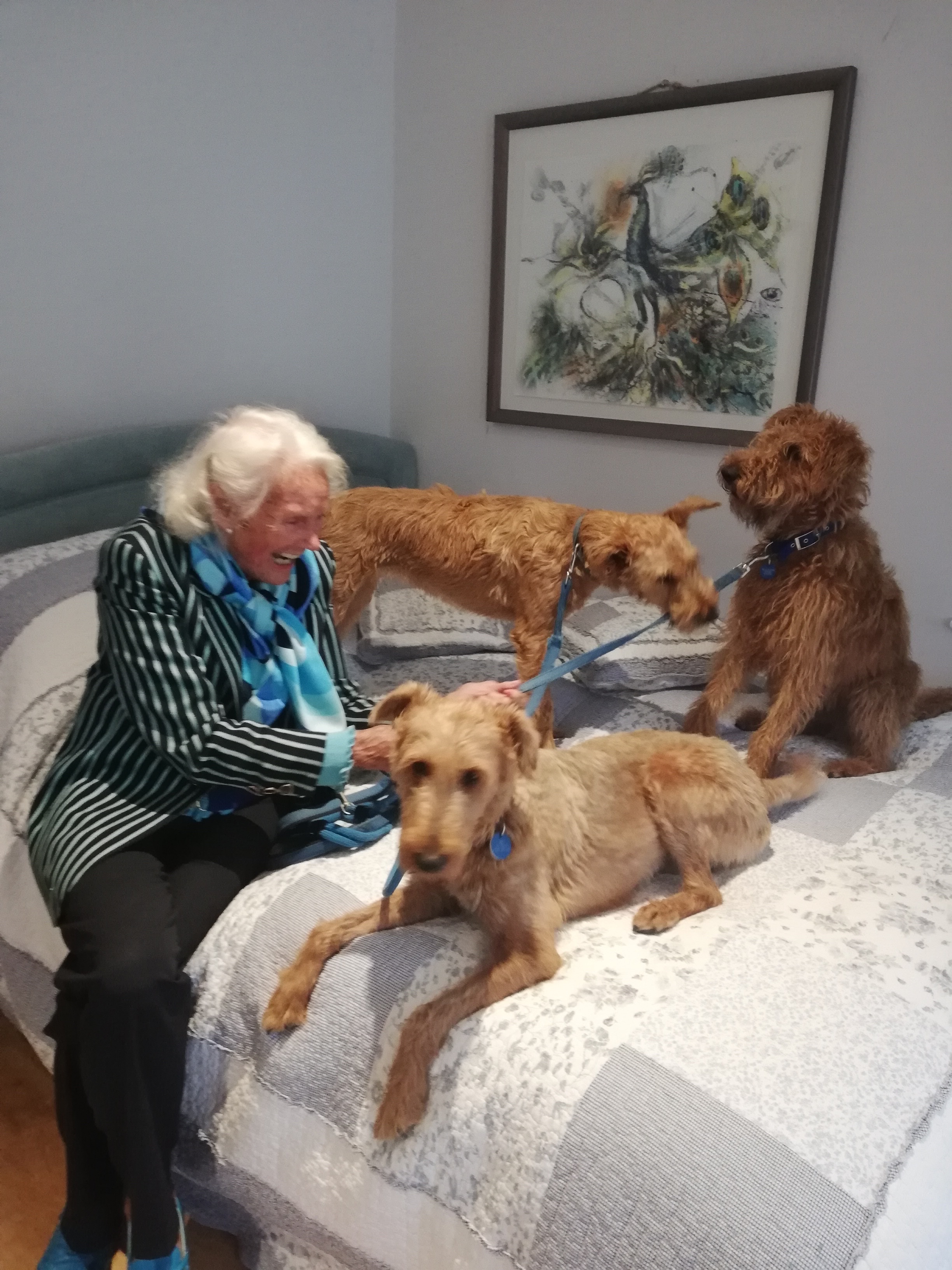 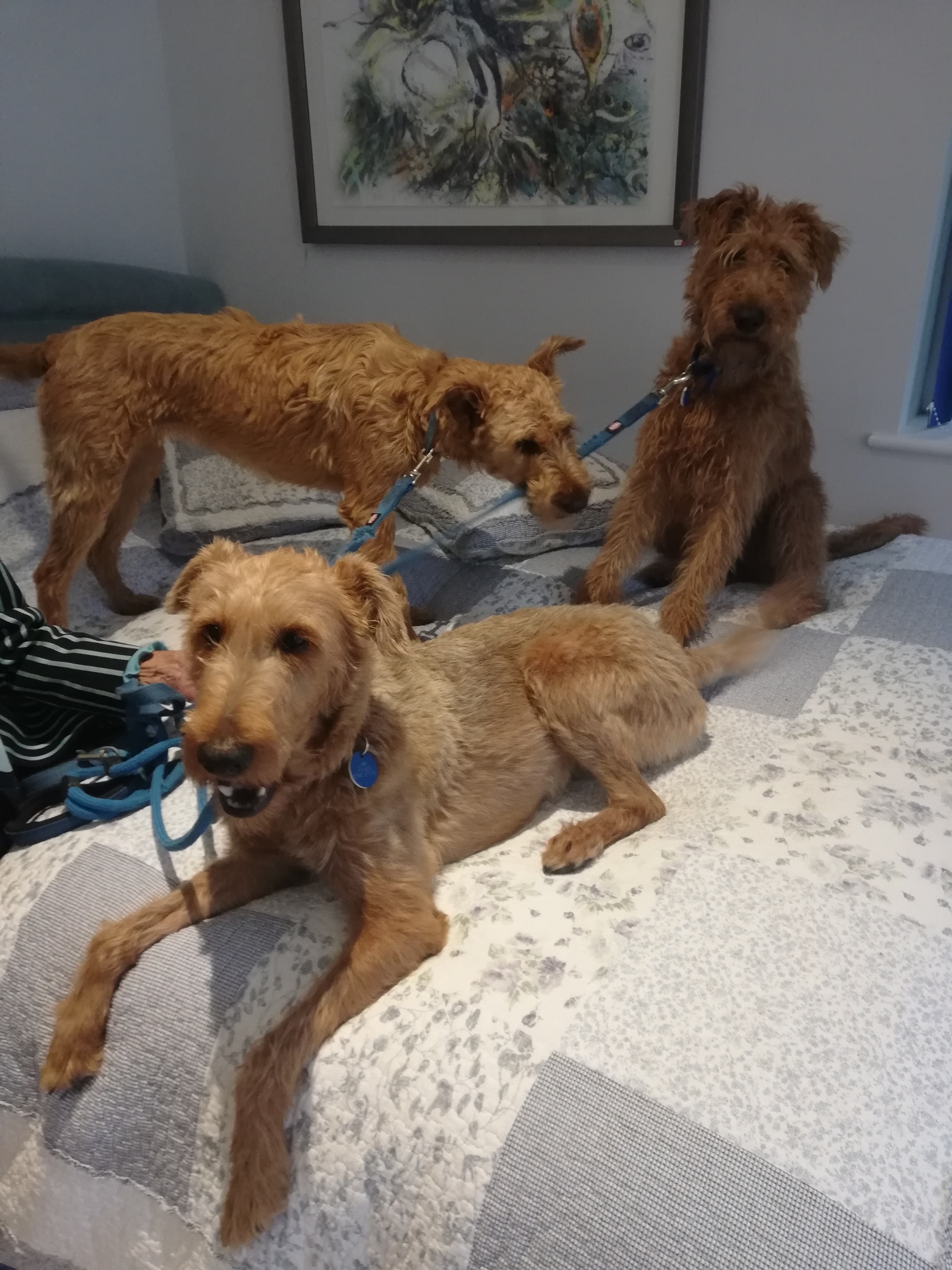 I’m not sure why it happens but every year there is one lone swallow, left behind when the others fly away. He swings across the marshes seemingly  unaware that winter is coming . It causes me the same anguish every year. After a long life I have never managed to cure myself of feeling responsible for every small creature I ever clap  eyes on. Bless them. Ridiculous really but there it is.