I have been pondering, yet again, whether perhaps one of the reasons for adoring our dogs is that they know nothing about politics.

Brexit mercifully passes them by – the EU – well whatever – tearful Theresa – who is she? and as for the protesters who drape themselves around London shouting about this and that, achieving nothing and costing millions – never heard of them either – and life rolls on merrily and full of joyful anticipation.

Except that I am watching the D Day ceremony and the tears keep catching me out which worries Libbs who watches anxiously. I am not sure what Marybell thinks but she keeps arriving with stasches of battered toys which she drops around me hoping I’ll hurl them out through the conservatory door and into the garden for her to chase. Her approach to life is entirely cheerful and I am drawn into her orbit of sunshine and highjinks very quickly.

It isn’t always easy however. My husband Ian, was a doctor attached to the Paras and he jumped into Normandy on D Day 2. Months of terrible fighting followed and the despair of watching young men die must have been a nightmare. He would say with sadness “we did all we could for them – poor chaps”.

We were very disappointed that our babies William and Albert could not come for the Bank holiday with us. William had a sore throat. I was longing to see how Marybell would manage two small boys running about now. She was so enchanted with them last year when they were two little crawlers. It was a real shame.

She adores children as do most Irish terriers . Libby loves them too but Maryb tends to take over and monopolises them. She is 2 this month and as we know  is very full of herself. She loves being brushed so I always groom her first, Libby who does not like the wire brush, is only too pleased to be pushed aside as Mb lines herself up for further brushing. She sometimes shoves through underneath and Libb’s hind legs are lifted up in the air. She never complains but I do wonder if she gives in too easily.

We had our favourite cousins Alison and Frank, to stay. They have a Jack Russell called Biggles who is one of Marybell’s soul mates. They’re as bad as each other (with a bias towards Marybell) and they tussle  and tumble and the games get a bit risque – or perhaps one might say – ‘inappropriate’. 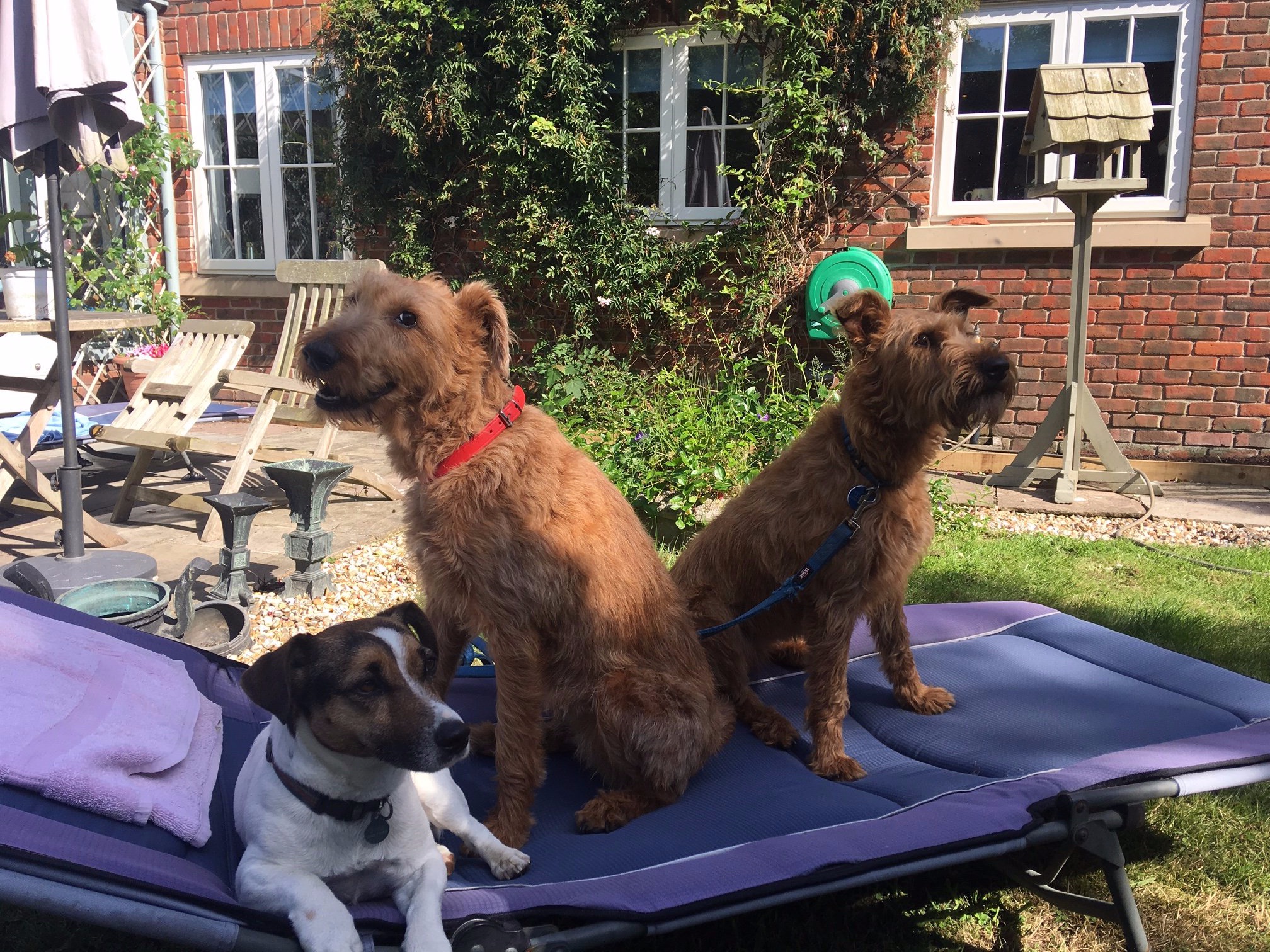 They find themselves booted out through the garden door!

Margo, is the latest baby in the family. She was spayed yesterday and is already it’s seems, in fine fettle. They tell me she is wearing a little suit something like a baby grow to protect the stitches. She doesn’t like it, but it is better than that awful head cone which they all hate wearing.

We spent the day with them recently and as expected, the play and chasing never ceased. They have a lovely garden which goes down to the river – in the beautiful Wood Ford valley. Margo has been a handful to keep in – a latter day Houdini and loved visiting up and down the river bank arriving in neighbours gardens full of good cheer.

They installed a low voltage electric wire to keep here in. Poor Libb’s I think must have touched it  as she spent all afternoon refusing to go any where near the end of the garden. She was wearing her ‘wronged look’ tucked up and tidy, surveying the silly puppies – or perhaps they had offended her?

My cousin Dorothy, who lives in Westbury  sent this charming cutting from the White Horse News. Roscoe has won their ‘Cutest pet award ‘ and his owner Leanne Hier is thrilled. She says ” Roscoe is our littler star – Crufts here we come”! He’s 13 weeks old but has already learned to sit, stand  and roll over. Yes he does look cute – angelic! 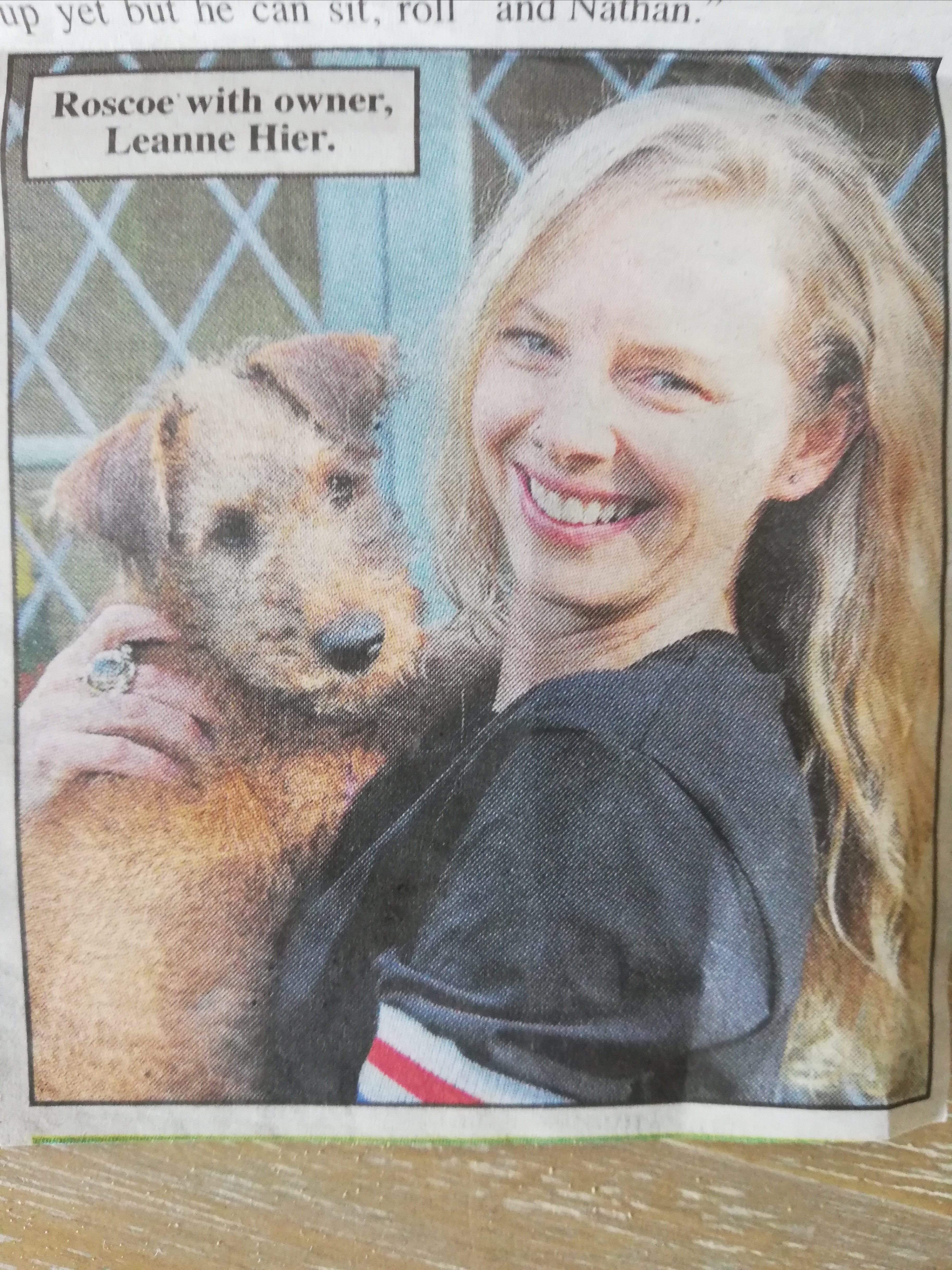 Oh the charm of the Micks. Like all puppies they capture your heart when they are babies and never let on that they can be hoodlums when they hit the ‘terrible twos’ – or the canine equivalent.

It is with sadness that I must tell you that Jean Soeters (the Dutchman) died in April this year. He arrived in England full of new ideas and bursting with enthusiasm about his Irish terriers. He had a glorious dog ‘Mister Mac’ and we saw him at the shows. He bred some lovely dogs and had a very special way of training them with love and kindness. He and his brother produced well behaved totally confident delightful puppies. Not every one has time or skill to settle a puppy and I have spoken to many devoted owners who were so pleased to receive a ‘perfect pup’ from Jean. They sometimes ran them on for up to five months and charged what’s seemed like astronomical prices. It was, however a  very successful idea and the puppies have been wonderful. 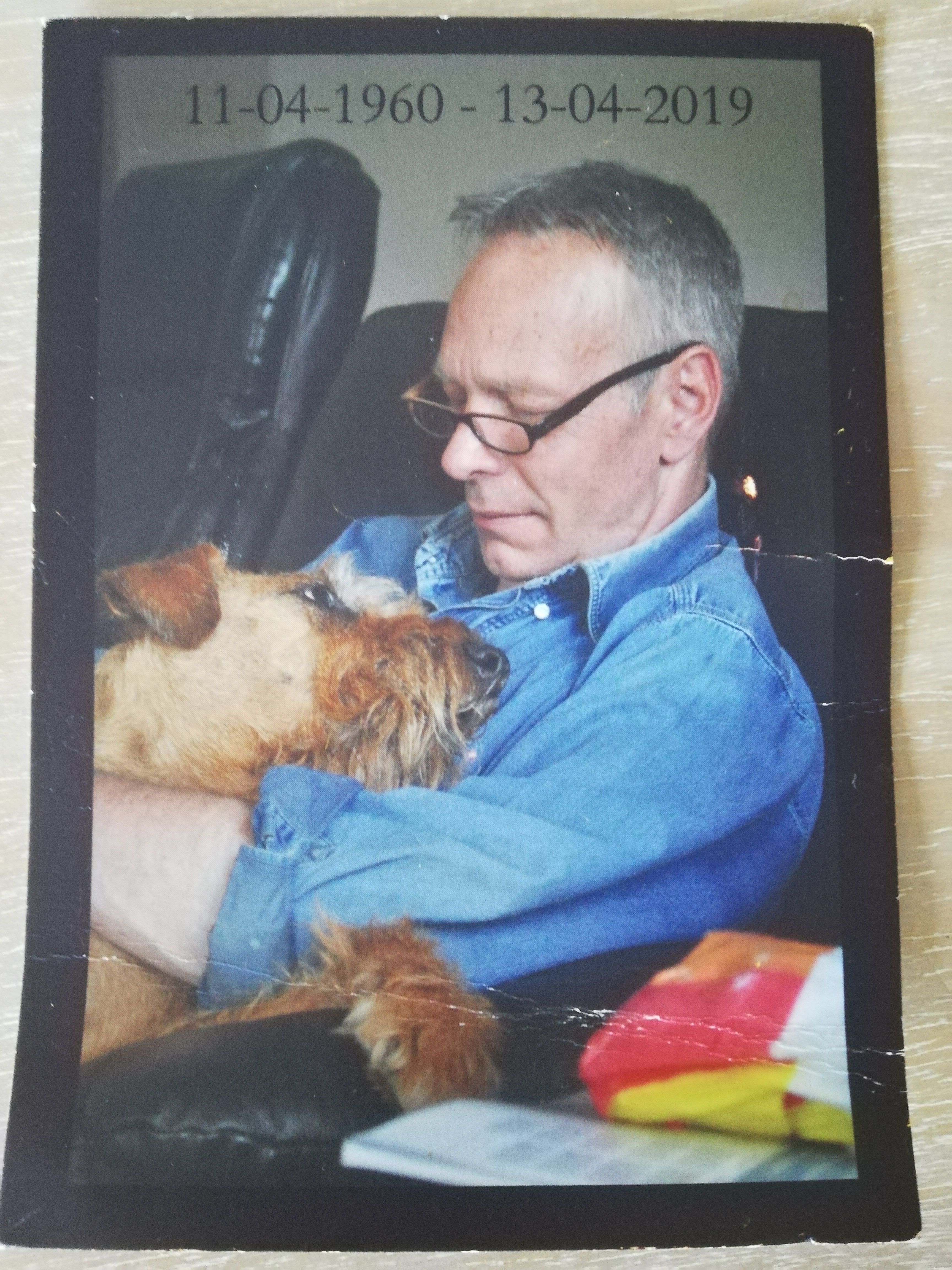 More controversial was his idea of breeding back the ‘black saddle’ which he insisted was originally shared by all terriers. At the time when we were concerned about numbers and it seemed an unnecessary interruption in the breeding programme.

But I remember Jean with great respect and affection. He passionately loved Irish terriers and that was a great bond between us. My son James and I have happy memories of a day when Jean visited us at home and brought one of his pups ‘Lucy’ and we were both struck with her confidence, interest in everything and she was so entirely ‘her own person’ – just adorable. He was an excellent photographer and we used several of his pictures in the calendars not least’ the motorbike dog’ swerving on a sixpence. This is the card with his own obituary and picture taken with his beloved Mister Mac.

We send our deepest sympathy to Debbie – and Jean – rest in peace.

Have a look at the article about ‘King Edward VII’s dog Jack. The King always said “he was the best dog I ever had”. (scroll down on the welcome page)

My ‘trans’ canary sat on her pale blue egg for 10 days until I was worried that she was neither eating properly nor taking regular baths. She was looking distinctly tacky.  I really had to throw out the egg which I managed eventually with great agony of mind. I need not have worried as I think she was rather pleased to be released from her nesting duties. She had a long bath and brush up – and hopefully her lazy summer is over.

My roses in the garden are at their best and I call them ‘sensational’ – Libb’s and Maryb are ardent hunters of the bumble bees. Silly girls they haven’t as yet met up with a sting! I do hope your summer is full of fun – do send us some pictures. 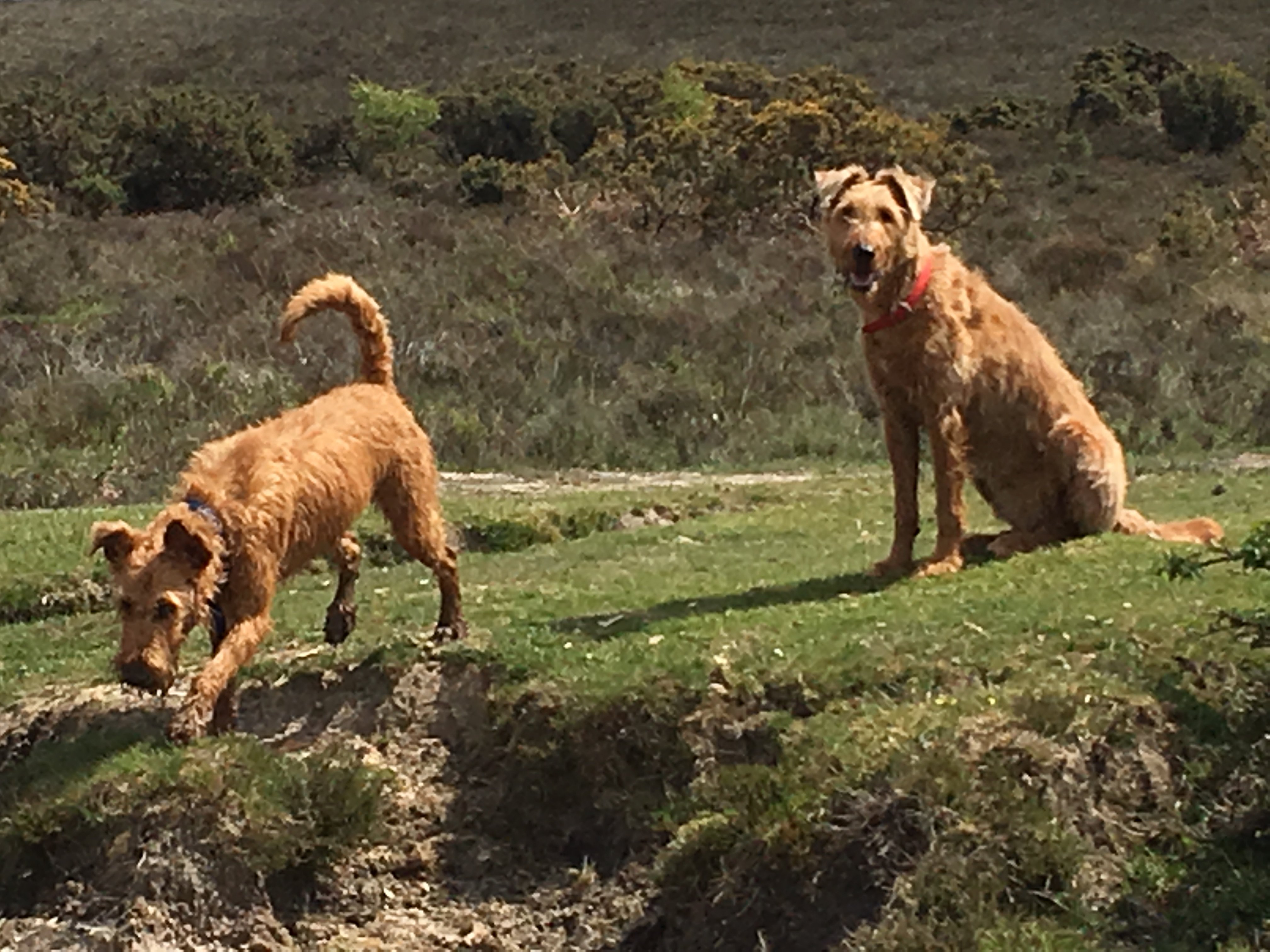