Having Daisy to stay with us was a great joy for the early spring.

She and Mary B played relentlessly for every waking hour punctuated only with those curious puppy ‘flop outs’ when they quite suddenly lie down with eyes tightly shut and sleep like the dead … not for long of course, maximum 15 minutes, before they wake, sit up and say ‘ where’s my friend – oh there’ and the games swing of again ending in more whirling chases around the garden.

Libbs seldom joins in but Cat, who walks them every day says they played happily as a trio whilst out in forest. Cat was very careful with Daisy, gradually building up her confidence which is not always easy with the distractions of ponies donkeys and deer plus dogs she didn’t know – all very new to Daisy’s world.

When Derek and Richards arrived to collect her it was a welcome such as I’ve never seen. I think she is a natural singer  song writer with a wast repertoire of squeaks and shrieks. Egged on by Libbes and Mary B who were eager to add some of the own less melodic shouts and yaps, it become an impressive ceremony and very touching to watch.

My son James was here and the crew went walking along sea wall . I did feel a little forlorn being left behind nursing my still rather painful leg. They arrived  back in great form having enjoyed  ‘the sea air’ – – as Londoners, they noticed the difference. The dogs it seemed had raced together playing with such happy freedom. And Libby lead the cavalry gallops across the marshes.

We avoided a tearful parting as Richard wisely scooped up Daisy and put her into the car driving off before Mary B could arrange a protest.

But we were sad and missed her for days . She is a charming affectionate little one ‘ far more serious and contemplative ‘ then any of ours have ever been. Here ‘careless rapture ‘ rules the day but Daisy, just a year old, is thoughtful and surprisingly independent and makes her owns choices – it’s interesting to watch.

With Crufts approaching I was unlucky or foolish enough to catch this awful flu that everyone seemed to have tangled with this winter – oh the misery of  ill health! I left the dogs at home and drove rather shakily  and a day late, to Stratford. It was all a bit of struggle made worse by the NEC having sold to Birmingham airport are most convenient car park. My leg didn’t help and I felt so ridiculous perched on my walker chair. But I loved seeing everyone and adored the dogs who, as usual, were just wonderful.

There was an excellent entry to be judged by Hans Gruttner who has his own line of Irish terriers in Germany  – the famous von der Emsmuller. His latest ‘doggie wonder ‘ is Doyle who is our cover boy in this years calendar. 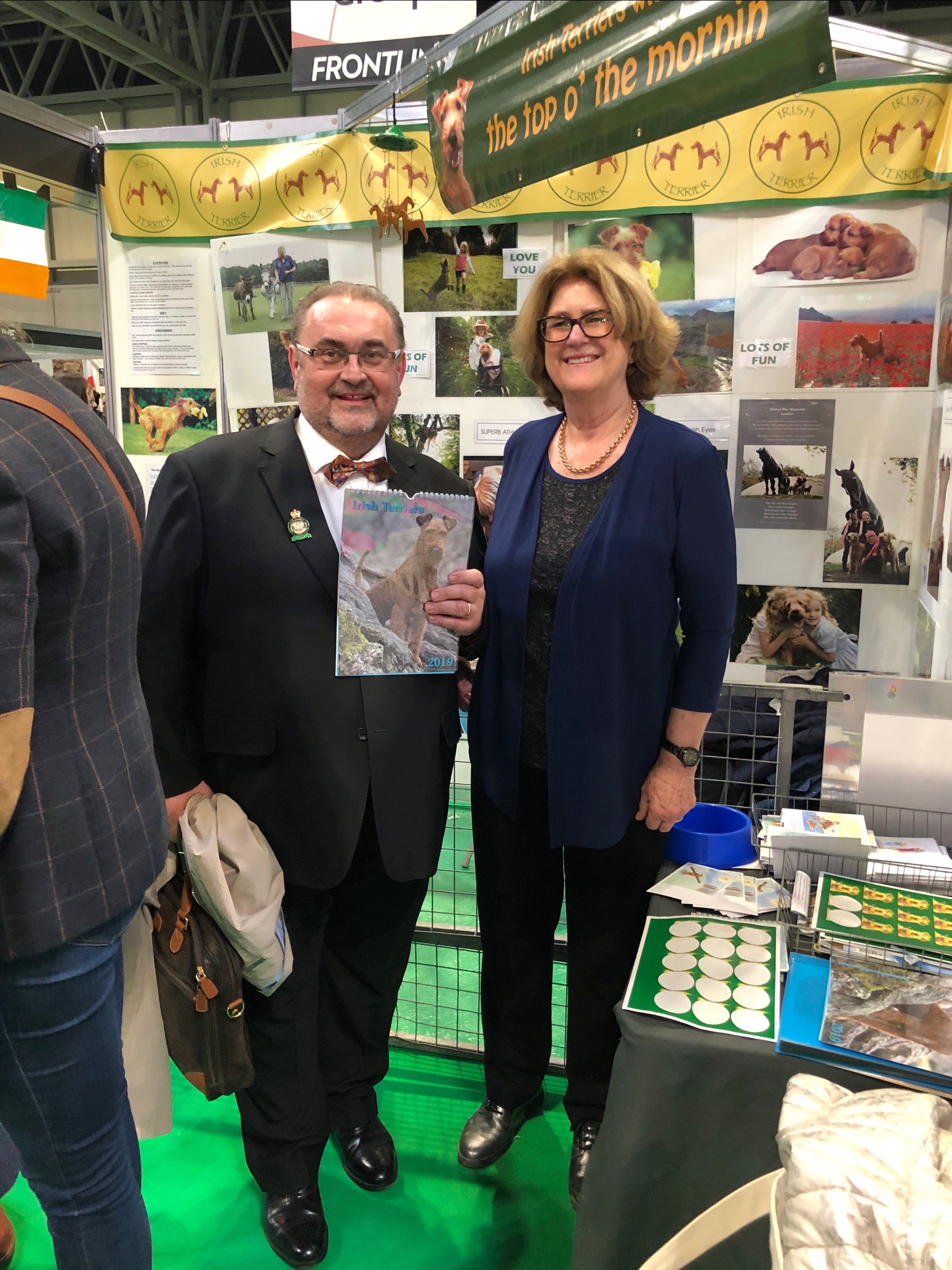 I went to see the dogs and the handlers before the judging and were surprised and how relaxed they all seem to be . Things can become a bit tense before the judging begins and Crufts is,  after all, the biggest show of them all . It seems 12 and a half million watched this year on television. One needs to be careful not to tread on anyone’s dreams.

Before the judging I hurried off to help ‘man’ the stand for Discover dogs. It is an escape, for as I say after every show, I don’t enjoy it  simply because not everyone can win! If you know about the effort and sacrifice that is behind presenting a dog at Crufts you understand why I find it so agonising.

Anyway the Micks had a great show and Hans did a charming interview with Claire Balding who is surely a born communicator and so obviously adores dogs.

Ann Bradley’s beautiful boy ‘Simon’ won Best of Breed and in a later line, up Claire even remembered his name – what a star.

To add to our triumphs we won the best booth at Discovered dogs – again. Someone said ” its always jolly around Irish terriers” and I said “We call it convivial and welcome ta ya “! It is a dogs of course who win the day we try to keep things tidy – handout leaflets and stickers, answer questions sensibly, comfort the tearful, laugh over the puppy pranks – but it is the dogs themselves, who make the magic!

Sadly I missed Hans and Karina who came round to see us. I was really exhausted and left before the traffic build up. it is a part of the campaign to ‘pace myself’ — not a concept that comes easily!

Home to my two woolly bears at last after all the show stoppers I been surrounded by they did suddenly look a bit rough and ready . They haven’t been to London because of my leg but a friend here put us in touch with Debz who runs a dog grooming  business but with the difference . Everything she needs its neatly packed into the large white van the size of the a mobile ice cream parlour but is in fact sort of doggie spa on wheels! 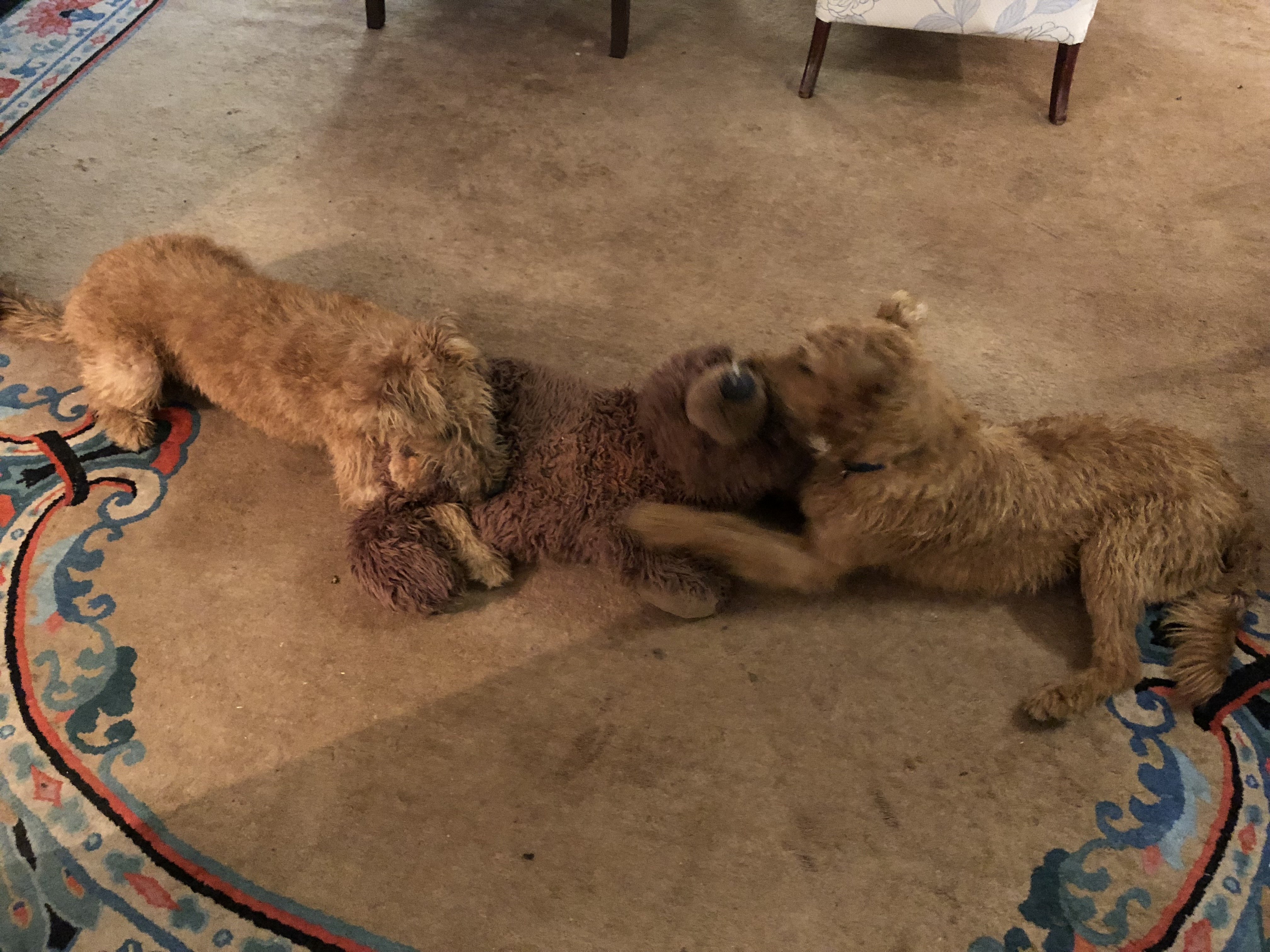 Libbs and Mary B were thrilled to meet her – “oh somebody new – how lovely”  and they were eager to inspect the van. It is such a sensible idea and very well designed with grooming table, warm tub, towels all neatly folded, brushes stripping knives , nail clippers all to hand and everything as clean as whistle. It was so easy and the girls enjoyed being at home taking turns with grooming and relaxing in the garden. They were stripped to the bone with neither beard nor leg furnishing to be seen. Debz insisted that they the coats needed  a new start and I sensed a faint reprimand and thought I’d better pipe down.

The girls was very skittish and pleased with themselves walking around each other and checking out the changes. They managed to get into the front seats of the van when Debz was packing up and had to be coaxed out with a biscuit!

Hey – ho for the Spring – what heaven to see magnolia in blossom  and watch the roses waking up. I greet them all like old friends!