The year has turned and the days are getting longer — what a wonderful feeling except that it seems never to stop raining. Libby dislikes the rain, but Marybell hates the mud and refuses to negotiate some of the gates to the Salt Marshes. It’s a tricky operation for me holding back a heavy gate booting her through (gently of course) and avoiding  a forward lurch and nose dive into the mud!

But the geese have arrived in full force — mainly Brent but joined by more skeins of Canada geese this year. I love it when they arc over our heads flying straight as the arrows at Agincourt. 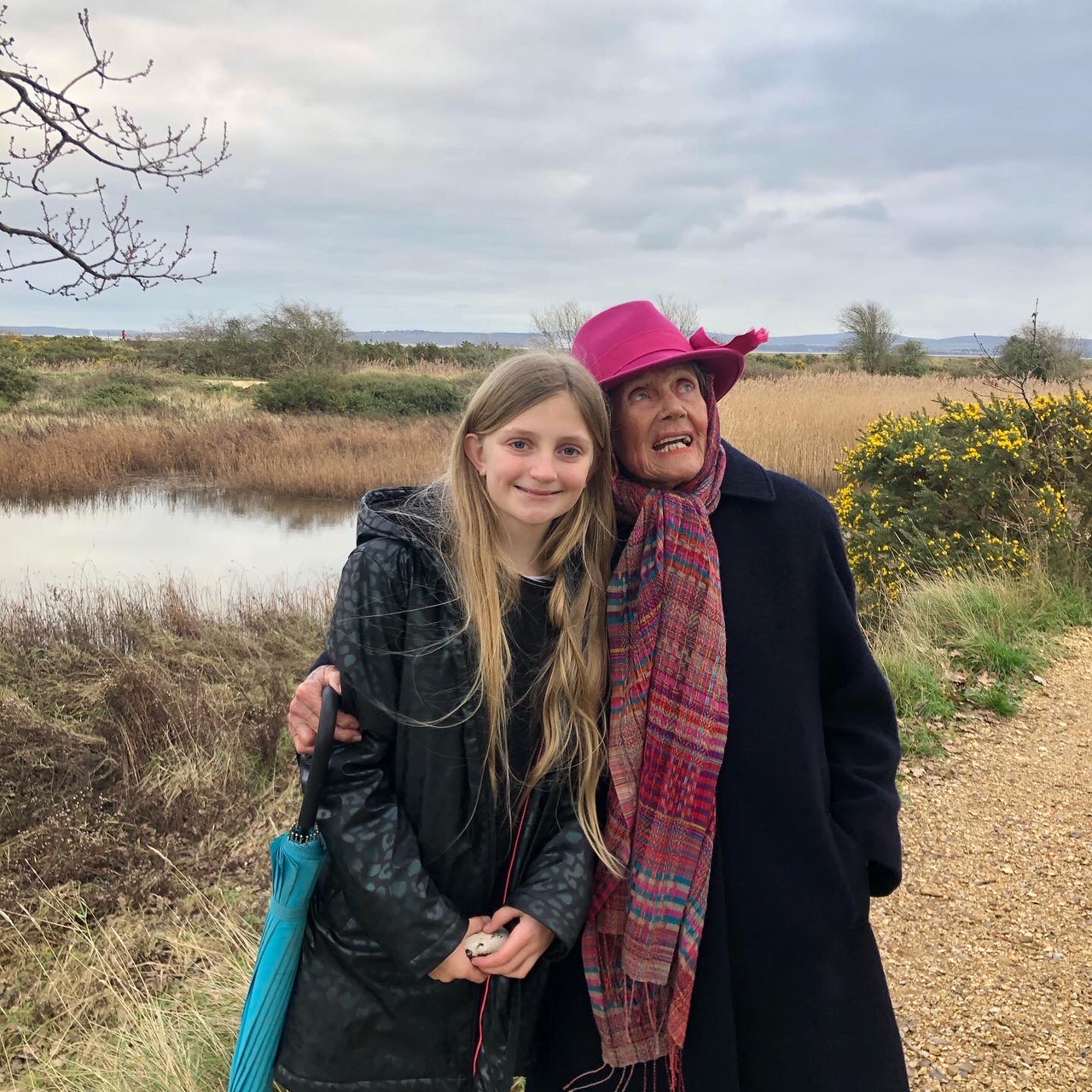 The dogs leap into the air and give chase. They turn and come back to me looking mildly  embarrassed.”We’re just amusing you that’s all” they seemed to say. I remember writing last month’s letter up to my knees in calendars in various stages of the posting procedure. It is a big haul before Christmas , but I have to do it myself — not out of masochism, but because it is a Christmas ‘offering’ from me. It takes a bit longer than Amazon, but thank you for your patience. I do hope you will be amused and enjoy it  through the year. We had Daisy staying at the time which upped the rioting a few notches, but on the other hand she kept Marybell entertained. Maryb has acquired the dreaded on-going game with the tennis ball. She carries it around in her mouth all day like a babies dummy. Every time anyone sits down or even pauses for a second she is there dropping it at our feet.Sometimes squealing and always wagging her tail wildly and begging for the game. She can catch the ball from any angle and returns at once for more — it’s relentless.

We say ” Boring boring go away “, but there are always enough friends around to keep up her interest and she spots the compliant ‘softies’ at once — Derek for the start — who keep throwing the ball for her. The Christmas tree was a great interest and attracted its fair share of ‘ accidents’. Patrolling round it examining everything within nose reach and carrying off and hiding the little brown soft toy dogs we’ve collected over the years, became something of a national sport  for the festive season. Thank heavens for lights that don’t succumb to assaults from the  ‘you know who’s’ and fuse every light in the house! Gone are the days when we had, in pitch darkness to franticly call out the electrician on Christmas Eve.

It did occur to me that this was MaryBell’s  first ‘real tree’ in the house — last year we made do with the fake one because of my broken leg. Some kind friends gave each girl a pink ‘rubber’ pig that made an awful grunting sound, actually it’s sound to me more like a mallard duck in dismay — than a pigs snorting . Maryb  wouldn’t go near them and I put the pair out at the front door in the end , to pacify her, but I am ashamed to confess that they were brought in every night to ‘sleep ‘ on a chair in the hall because of the cold outside.

My son Jamie and I spent Christmas day with his twin Boo and his family which includes their puppy  Margo.  She’s a gorgeous girl and so funny and playful. Her breeding is very close to Marybells and they share the same sunny, up beat character and are born athletes. Libbs was appalled by the water logged garden but the youngsters crashed about in the pools.

We had a post Christmas party at home, mostly neighbours, which was great fun. The ‘Close’ is a lovely place to live — everyone is kind and humorous and the dogs known them all. Daisy was back with us and my three co-hostesses were welcoming and attentive. There were no major thefts, no smoked salmon sandwiches, no fish balls, not even mixed nuts — well none that were detected which is all that counts!

My cousin Alex came down from Bath for the day bringing three younger cousins and their  Flat coat Insee! 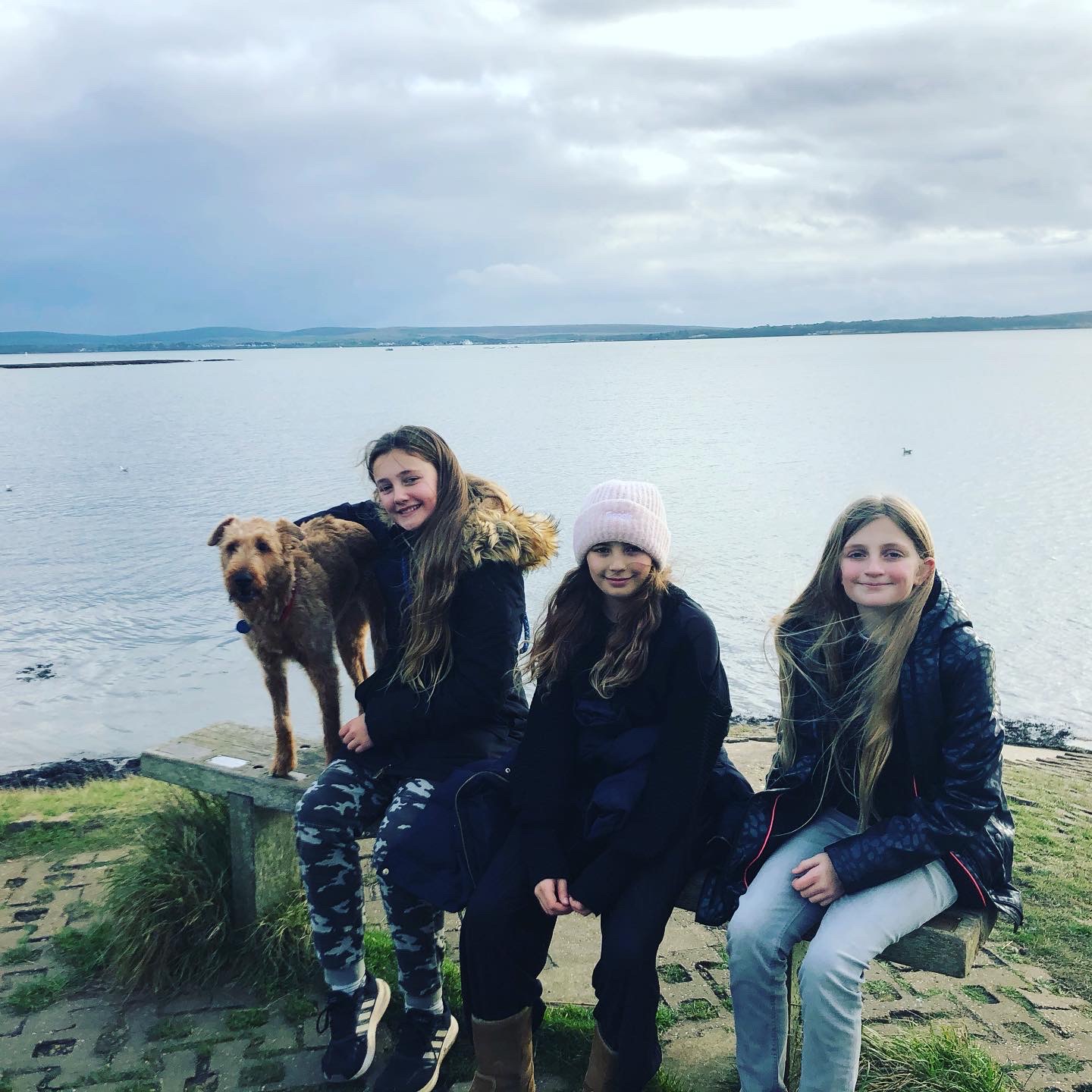 He’s an old friend of ours , but to my huge surprise Daisy would not let him come anywhere near me. He is a big boy and boisterous. I think she was afraid of him and felt she had to defend me too. She’s not two yet and it seemed very brave for one so young. With Libby’s help I managed to soothe away the growling and they played very happily together at the end of the afternoon. He’s dear kind dog but has a worrying habit of disappearing sometimes for hours at a stretch. He’s more reliable now but there have been some nightmare moments.

Maryb is very keen on listening when I play  piano. She sits beside me on the piano stool raising the odd paw and surprising herself by the sound she can make. They must be the funniest dogs in the world! 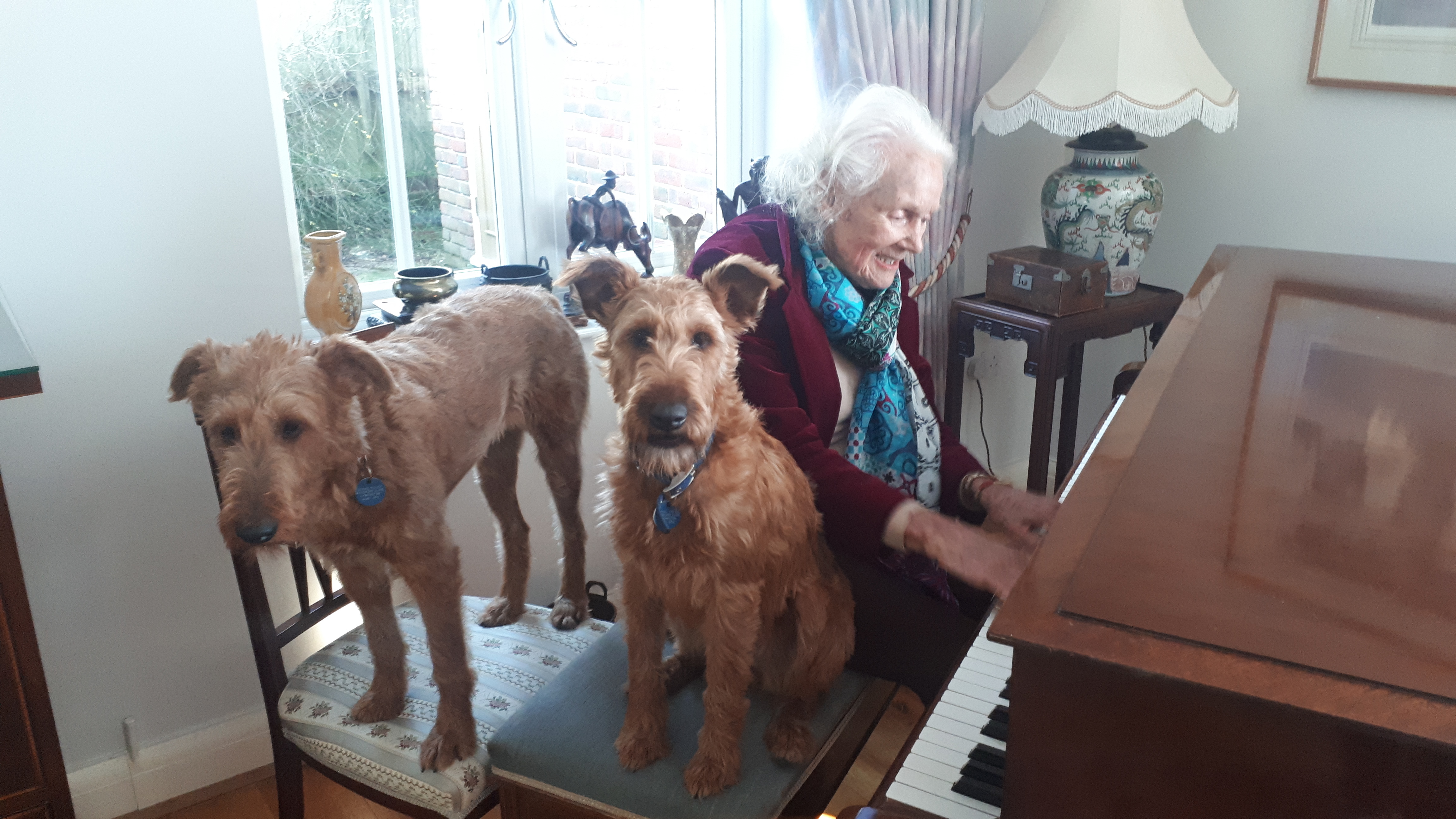 We have, however had several letters from friends whose bitches, after whelping and raising successful litters seemed to suffer a change of personality and become aggressive to other dogs  even within the family. Vets seem to refer constantly to hormone imbalance but offer little advice about  ‘management’ and nothing about the cure. It can be a real heart break with the whole household on tenter hooks expecting the next scrap. I wonder if any of you has some helpful ideas to pass on?

Today is Sunday Jan 19th — exquisite day of bright spring weather and the  Solent as smooth as a window pane  — quite miraculous for mid January.

To Libbs and Marybells delight the sea wall was crowded with people — mostly bird watchers and squads of marchers swinging along and prodding the earth with their ski sticks. I did think they were acting out some fantasy of the snowy slopes and quite expected to hear a chorus of yodelling — but no– life is to serious fort that. But such joy divine for Libbs and Maryb. They have a favourite ‘ beau’ who lives in the lane that leads to the marches . He ‘s a charming golden retriever called Rusty and is often in the garden when we pass. He reclines on the steps or sits in the porch. The girls stand up at the gate squealing with delight  as he, very slowly, descends the steps — the shrieks grow louder and he graciously  accepts the kisses  on his nose through the gate. 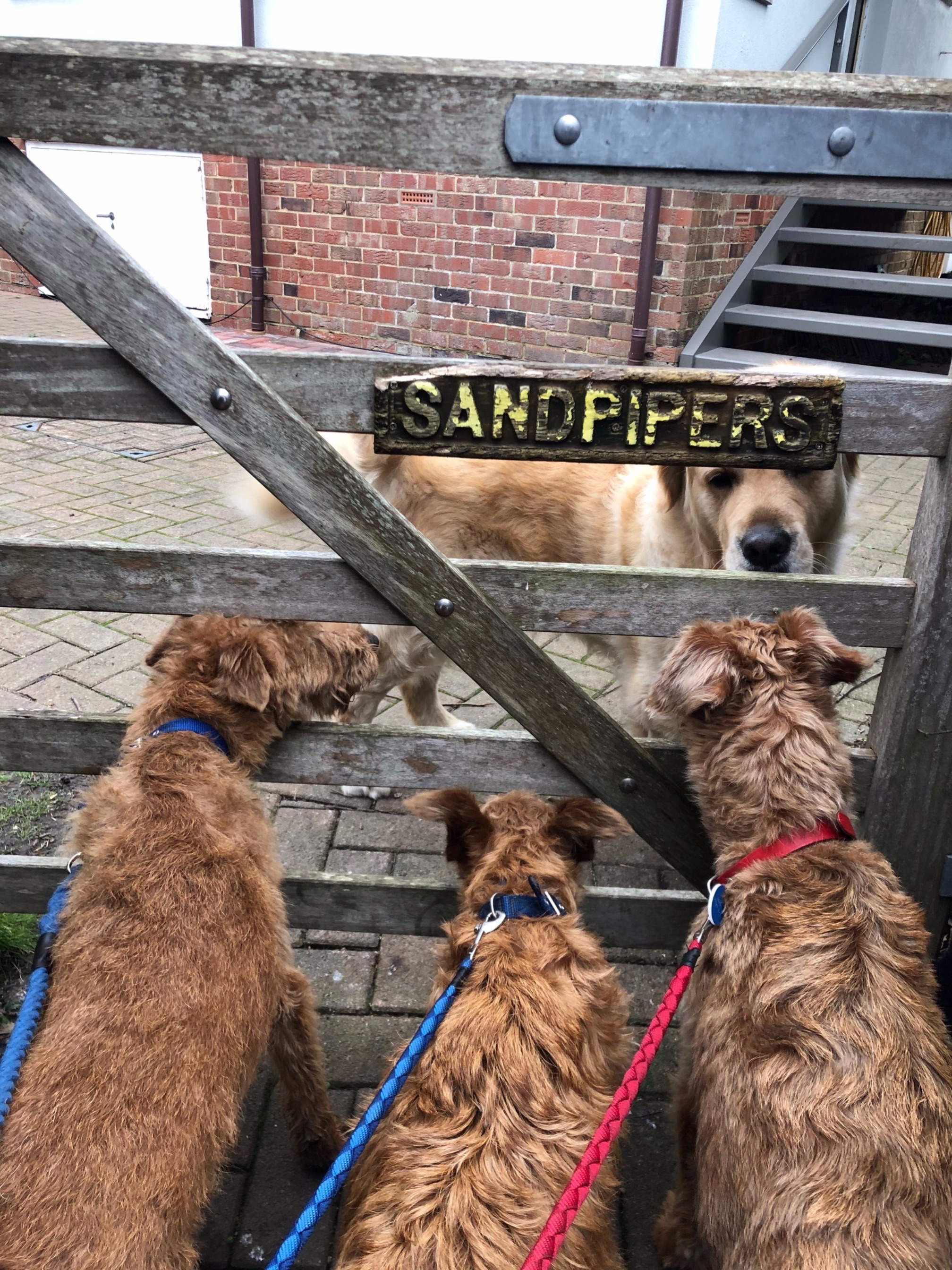 But this morning he was out with his Dad in the lane. They spotted him at once and the love storm began — they whirled and pranced around him. Libbs was the worse throwing all caution to the wind and no pole dancer could have been more enticing. Rusty stood still just waving his feathery tail. I was rather embarrassed at my two hussies and eventually managed to drag them away.

When we got to Rusty’s gate I wondered if they would remember that he was out walking. It seemed they’d forgotten as they tugged towards the gate . Once there in a perfectly synchronised gesture, they made a joint puddle — not easy after a  long walk. Could we say they ‘stooped to conquer’!

And as we hurried home for our dins,  I did wonder if Rusty would get the message !

We three all send our love and best wishes for 2020!