After a truly calamitous month of feeling more ill than I can ever remember, I seem to have emerged at last, undoubtedly a little blast beruffled, but looking less like Banquo’s ghost and more like someone I vaguely recognise. The cause was undiagnosed pneumonia and my apparent inability to recognise quickly enough how wretchedly ill I was becoming.

Thank you so much for your good wishes, the many beautiful cards and pics of your dogs. It has been a huge, almost overwhelming kindness and brought some brightness and amusement to a gloomy spell of sickness, which left me sometimes with a feeling of exhaustion and unaccustomed desolation.

I’ve been home now for several weeks and the real joy of it is that with Miss Libbs and Marybell in charge we’ve broken all the rules of good housekeeping; they’re up on my bed in the morning; we rise when we like then snooze the afternoon away eating our lunch at teatime if we feel so inclined. The snow, too, has been a good excuse for all manner of petty lapses of domestic discipline.

They’ve been having wonderfully long walks in the forest with Cat and Louise and their troop of doggy friends. I fear they’ll find our walks on the salt marshes a little tame when I venture out with them next week. 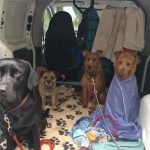 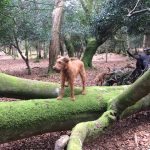 It was very sad, or was I just furious, at having to miss Crufts? I’m not a great fan of dog shows, mainly because, as I’ve said so often before, it is such a pity that not everyone can win. What joy, however, to see a beautiful Mick standing proud in the final terrier line-up! We all know he should have won (of course), but second place will do. It had me dancing in rather stately mode, round the television, with Libbs and Mary B in tow. It’s not unusual for us, we like to dance, but this was more subdued than our usual wild gal-lops.
I did miss Discover Dogs too. It is marvellous to talk Irish Terriers for days and give everyone time to meet the Micks at their best. They are splendid show dogs, we know that, but it’s the charm that wins the day at DD. I missed my friends too – and they have been far too kind to say that it was a relief not to have me tidying up the booth and tucking their coats out of sight all day. Everyone did a great job and it is wonderful that in a time when it is increasingly difficult to find anyone who is willing, or indeed able, to do voluntary work, we are so fortunate and so grateful to everyone.

Marybell set out on her first proper walk ‘with the gang’ in January. She’d been lining herself up for weeks, flying to the gate when Cat came for Libby. She was heartbroken when Libbs kept disappearing into Cat’s van and being driven away.

At last it was time and I heard my breath as Miss Mary B stepped up to the plate following closely behind Libby and tucking herself in beside her with that ‘a-o let’s go!’ Look on her face. I did wait rather anxiously for their return. It felt like that first day at school and was, I remembered, the first time that Marybell and I had ever been parted. Time ticked – how could two hours possibly take so long? I ran to the gate when I heard the van and out shot Mary B with a leap into my arms. She was so excited about the marvels of the forest and the joy of a pack of friends.

Cat said ‘She’s a wonderful pup, seems to know it all – rock solid recall, loves to play, but is respectful of the older dogs. Keeps an eye out for Libbs, but is not at all anxious and is such a joyful spirit’. Liberty Belle and I gave each other a wink, yes… eh… well…er… we won’t mention her ‘nothing is sacred’ attitude to everything in doors – that wouldn’t be fair.

It may seem eccentric to some, but I don’t make any great distinction between the best way to manage small children and young puppies – to me they are almost one and the same. They need time and space to explore and play, rest when they need and loved on their own terms, not fussed and cuddled to death. It mortifies me to hear the continual shrieks of ‘no, no, no, sit, leave, down, down’ and worst of all ‘Ugh, ugh, ugh!’ in an ascending scale. The Micks are so intelligent and intuitive about how to manage us mere mortals and they do fit neatly into the scale of our landscape and habitation, unlike some of the ‘heavyweights’ who tug and blunder their way through life, being bullied and boomed at. For them it’s not just about learning, but coping with strength and size.

Dealing with mischief is another chapter! Marybell knows very well how the world ticks and that Libby and I are six steps behind her when it comes to possible pranks. When a taxi arrived to take my son James to the station, she was discovered, within minutes, sitting in the driving seat, tail a-wagging and being very kind and welcoming to the driver. Jamie said to the driver ‘do please come in’.

I read last year that in Ireland people were beginning to recognise that some of their native breeds of dog are in danger of extinction. The causes for the decline are easy to argue and we can discuss this another time, but I believe that they have been given some sort status as an integral part of Irish Cultural Heritage. Well, high time too!

Now I have recently received through the post a book called ‘The Curious History of Irish Dogs’ by David Lake Knox. It arrived in an envelope addressed to me, but without any sign as who could have so kindly sent it. Please, if you have the answer, do let me know as I would like at least to express my thanks.

I fell upon the chapter about Irish Terriers with keen interest and found that some of the writing seemed curiously familiar. The author has certainly done his homework and gives a clear outline of their history, from the time they were declared a ‘specific’ breed recognised by The Kennel Club, right up to the present day. He mentions their place on The Animal War Memorial in London’s Park Lane and the increase in numbers of pet owners looking for what we know to be ’the perfect, proper dog’.

I would endorse almost everything he says and would only like to mention some facts he might or should have mentioned – namely their evolution long before the dog show scene. There was always a need amongst the small farmers in Ireland for a hardy, medium sized terrier; a real all-rounder to help run the farm, ‘strong enough to chase a fox and guard the potato patch, but unlikely to eat you out of house and home’. They were brilliant hunters (yes, poachers) and killers of vermin, but with a friendly upbeat temperament, loyal even unto death and with a legendary love of the family children. They were never used as pack terriers, but highly intelligent, adaptable individuals bred with great care over many generations. It seems they were mentioned in ancient manuscripts by the Greeks. The golden coat maybe an afterthought, but their souls and hearts of gold have surely remained the same. I feel there will be more talk of this. 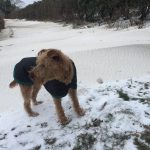 We seem to have hit another hiccup in the progress of spring after another heavy fall of snow. I tremble for the poor birds, especially a jolly little flock of long-tailed tits that play on my car in the morning sunshine, tapping the side mirrors and running sideways along the edge of the windows admiring themselves in the glass, or so I think. And I haven’t seen them for three days now, which worries me, but the robins are being nice to each other, which makes for a change, and they’re feeding together two or three at a time on the bird table – and Biggles has been to spend the day, which inspired some flirtatious encounters with Marybell! 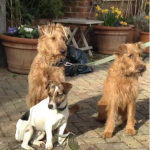 And best of all, little Daisy is at home with Derek and Richard. She looks like a small, wind-up teddy bear and has them both enchanted. I haven’t met her yet, but this must be the start of my first love affair by email. 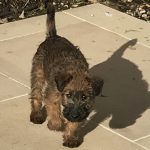 Thank you so much again for your many kind wishes. We’ve more plans for the website, which I’ll be telling you about very soon.