This is not meant to sound ungrateful, but the summer has already been far too hot! The garden is thirsty in spite of the routine evening soak. Libb’s and Marybell’s — coats seem positively bleached blonde in the heat. It could be the sea bathing but, of course,the light is strong at the coast.

I am surprised how some of the old curtains which did years of yeoman service in London have now faded from pale blue to ghostly dishcloth beige. The worst thing about the heat, however is that we’ve had reports of serious tummy upsets amongst the dogs. Zorba (Arabella Dorman’s boy) was on the a drip for 48 hours.

Libbs and Marybell had each a serious ‘off day’ curiously two weeks apart. Neither dog had ever been ill and Libbs is 8 next month. We had the limp body, the sad eyes, the apologetic refusal to eat or walk out.

I did lose my nerve with Bib’s and took her to the vet — something I rarely do. It was not  dear Mr Bently but a very keen conscientious young vet ‘she looked at least 14’ and did a massive examination — eyes, ears, feet, throat, and asked endless unanswerable questions about her water intake, stools and level of greed and how much rest she needs! “Good heavens” I said they’re Irish terriers and for the most part look after themselves! She did, however. found a speck of blood on the tip of a large fearsome looking thermometer. No treatment was required just the usual chicken and rice for a day or two. Marybell had a quiet day at home last week — the symptoms were the same. Cat who walks them said that Libby was more puppy-ish joining in with all the games and even disappearing occasionally without having to worry about Maryb getting over excited and misbehaving.

Miss Mb is an astonishing athlete.  She reminds us of our darling Miss Bunch who never stopped leaping over park benches repeatedly back and over again. Mary B is different in that she does nothing repetitive but she can rise like a jump jet or produce a leap of such extraordinary complexity that it seems miraculous that she can come out of an airborne twist and land on all four feet. 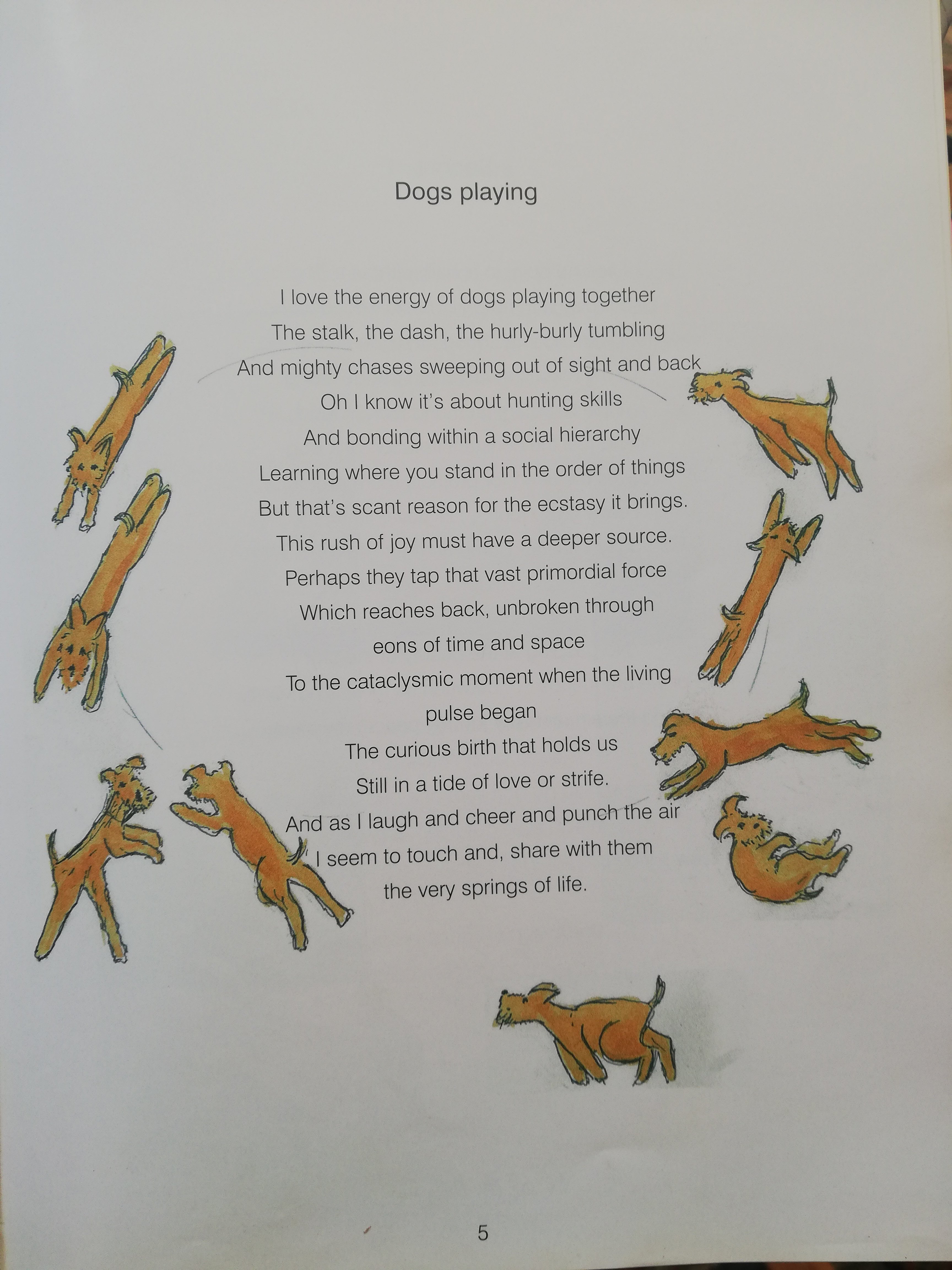 My leg seems to be healed at last. It pinches sometimes when I first stand up and I do still feel safer with the stick.  To Libbs and Maryb’s delight we had some our favourite friends to stay. They love it when the house is packed to the rafters and the especially if there is no ban on and early morning bedroom round to make sure that all is comfort and that everyone has slept well. They take their hostess duties very seriously and never forget a friend.

One friend came to tea and being fond of dogs, she played with them tugging Daisy’s enormous teddy. He almost lost an arm, but the next time she came they dashed off to find Aloishes (?) and together carried him back to drop at her feet. Now that’s clever. 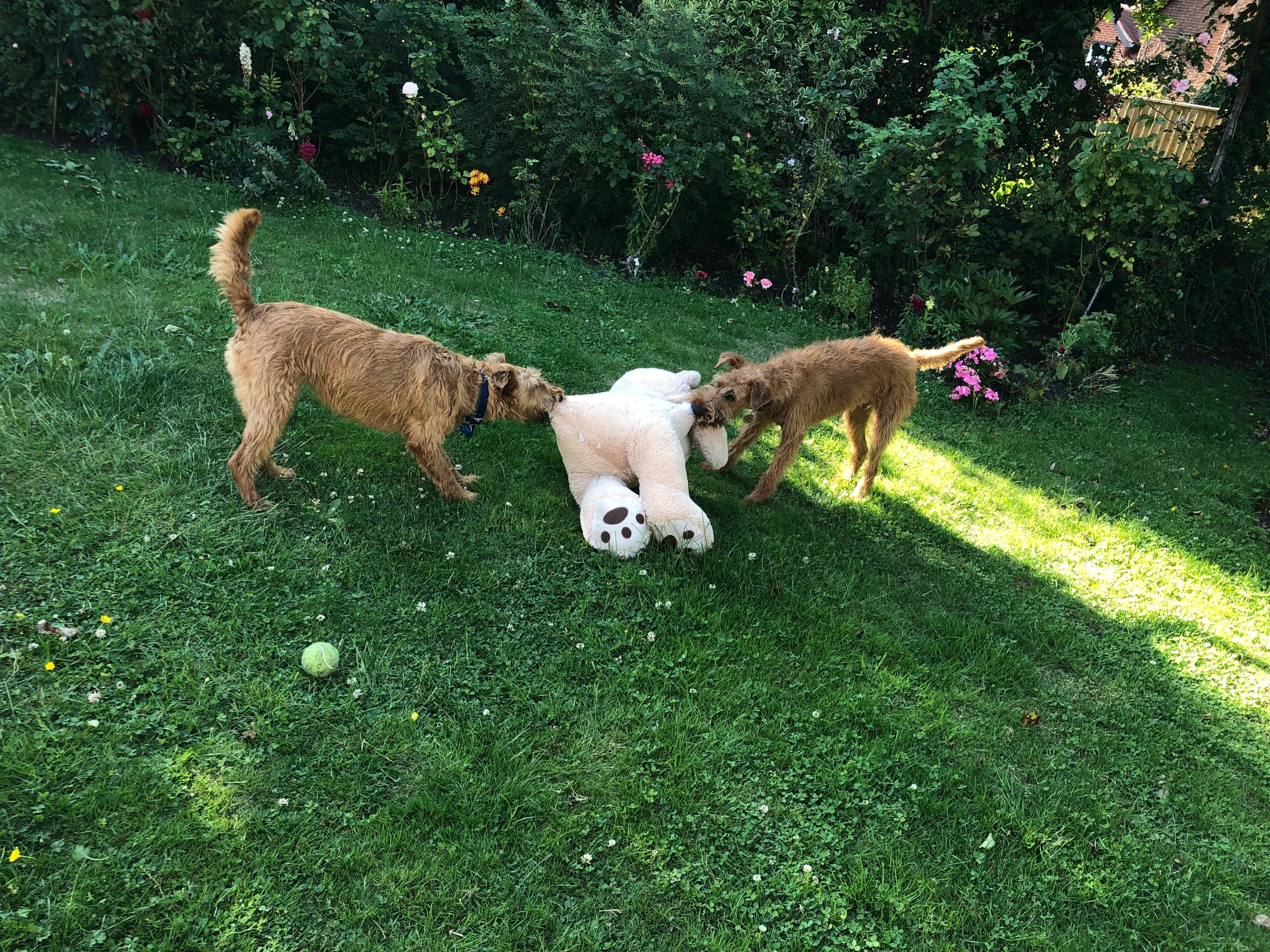 Our best friend Daisy has been to stay. Derek and Richard dropped her off on their way to France. 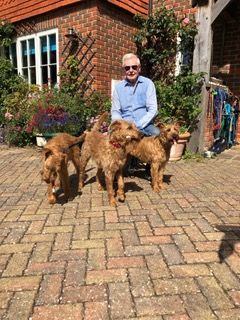 We all know about the rioting, the race tracks around the rose beds, the tipping out of battered toys from their box, the buckled up floor rugs and the piles of cushions pulled from sofas and chairs. The worst game, however, happens at bed time when I am sitting propped up in bed reading and everyone is settling down at last. This is the moment  when a large moth flutters through the open window. In a flash all three dogs leap on to my bed and fling themselves around. The fact that I am ‘in situ’ has no relevance as they lunge around chasing the poor fluttering creature.

It always ends with a mega drama, someone crashes of the bed (or is pushed) or I lose my cool, up the shouting or pelt them with pillows. Turning off the light is the only sure way out and even then they sit very still in the dark listening for the slightest flutter.

Well whats wrong with a little misrule. It keeps us on our toes and the jokes are endless.

My sons Boo and Jamie were here on Saturday much to Libbs and Maryb delight and certainly a special pleasure for me. We discovered that ‘Biggles’ (the flying ace) canary had disappeared. He’s so bored again, as Percy Grainger ( Perciviata — as he become a she and yes, after Anunciata Rees M) has taken to her nesting again. 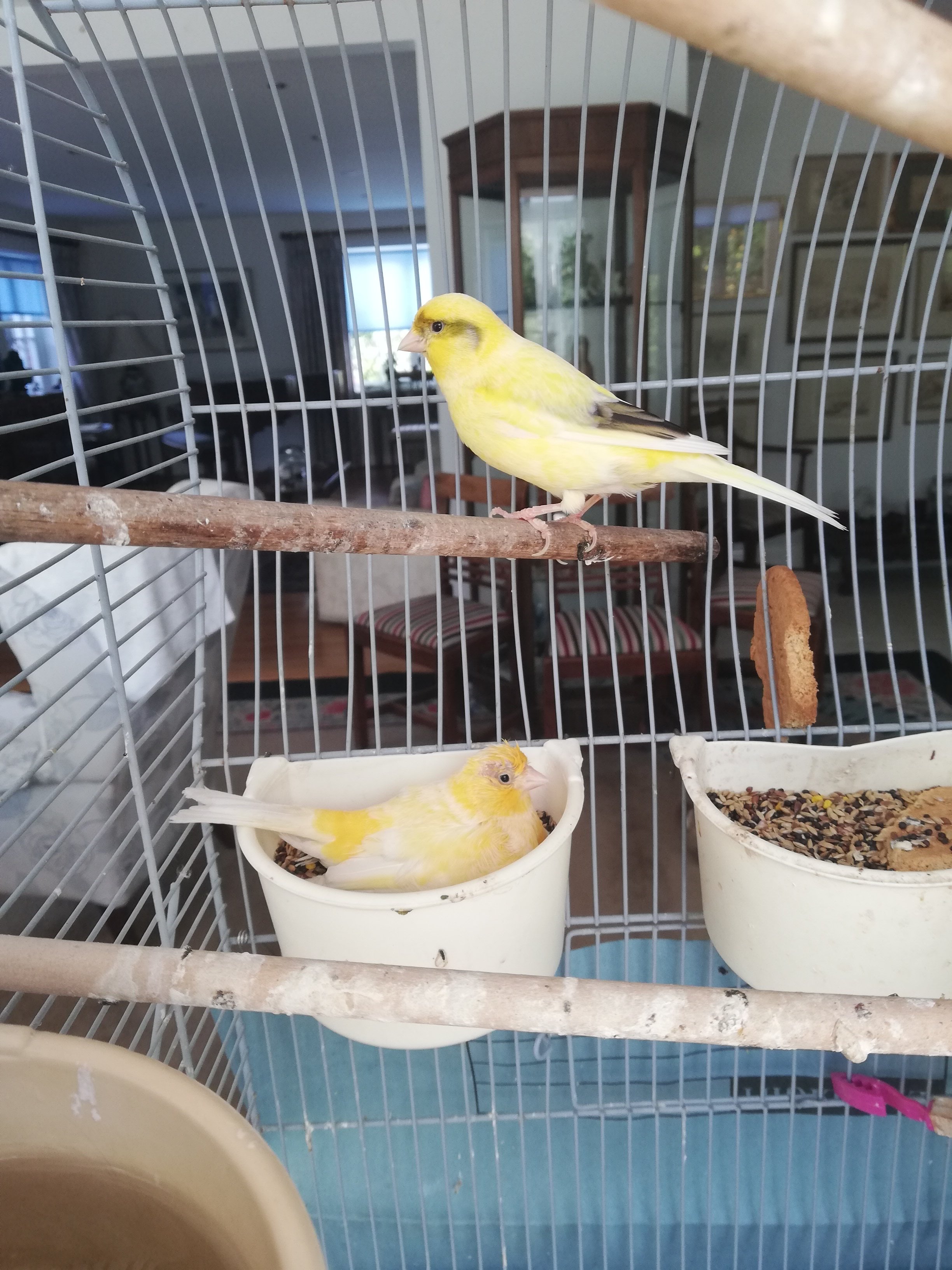 Biggles turned up next door and I was summoned through the hedge to come up with a plan. I was apologising profusely for Biggles bad manners and for the two noisy barking dogs behind me. I was cut short in my tracks “who let him out anyway? “my neighbour said. I have since learned that he is retired distinguished  naval man. My instructions which came over the fence  like shell fire.

I felt like a young naval rating (shades of Kenneth Williams). Anyway — with superb efficiency the cage appeared with Biggles re installed and I received some more  quick fire advice which I shall endeavour to remember! Aye aye Sir and I’ll remember to salute!

I always loved the way Irish terrier take an interest in everything that happens around them — pack a suitcase and they will help, receive a parcel and they will need to see what’s in it — Open a cupboard and they will be there peering in. Nothing passes without comment but this was a funny one.

My husbands Ian, was a medical student in the late 1920’s and bought the obligatory skeleton for his study of anatomy. Referred to as ‘little Pole’ Ian kept him in his own tin box with all his original papers. I’ve been trying to find a good home and at last there was a young doctor who was pleased to have him in the hospital in Guildford. Libbs and Maryb were intrigued when the box was brought out from under the stair cupboard and were very exited when the lid was opened. Two black noses shot forward to suss out the possibilities.

My reaction surprised me — an awful wave of sympathy swept over me for the poor man and the dogs were been pushed away through the door. “Get out you two and show some respect.” Strange really, but he had lodged with me for 50 years or more.

Reports are that he has settled well and is treated with grave respect by the medical students.

My garden continues to be full of joy  and I am amused by the over grown baby birds which perch precariously on the bird table begging to be fed still by their exhausted parents.

Go and look for your own grub!

I do hope you are enjoying  the summer, I am not going to France this year — far too HOT!!