July has been a long month. I began to think that it would never end, especially when the heat wave was extraordinary and burnt the roses to cinders — and then the ‘rains came’ — the garden shook itself and set off again on a jolly trot through the long summer days.

The gardeners had weeks off because of the lockdown, but they rolled up this week looking bronzed and relaxed and I said rather sharply: ‘Have you two been on strike or just on holiday?’. 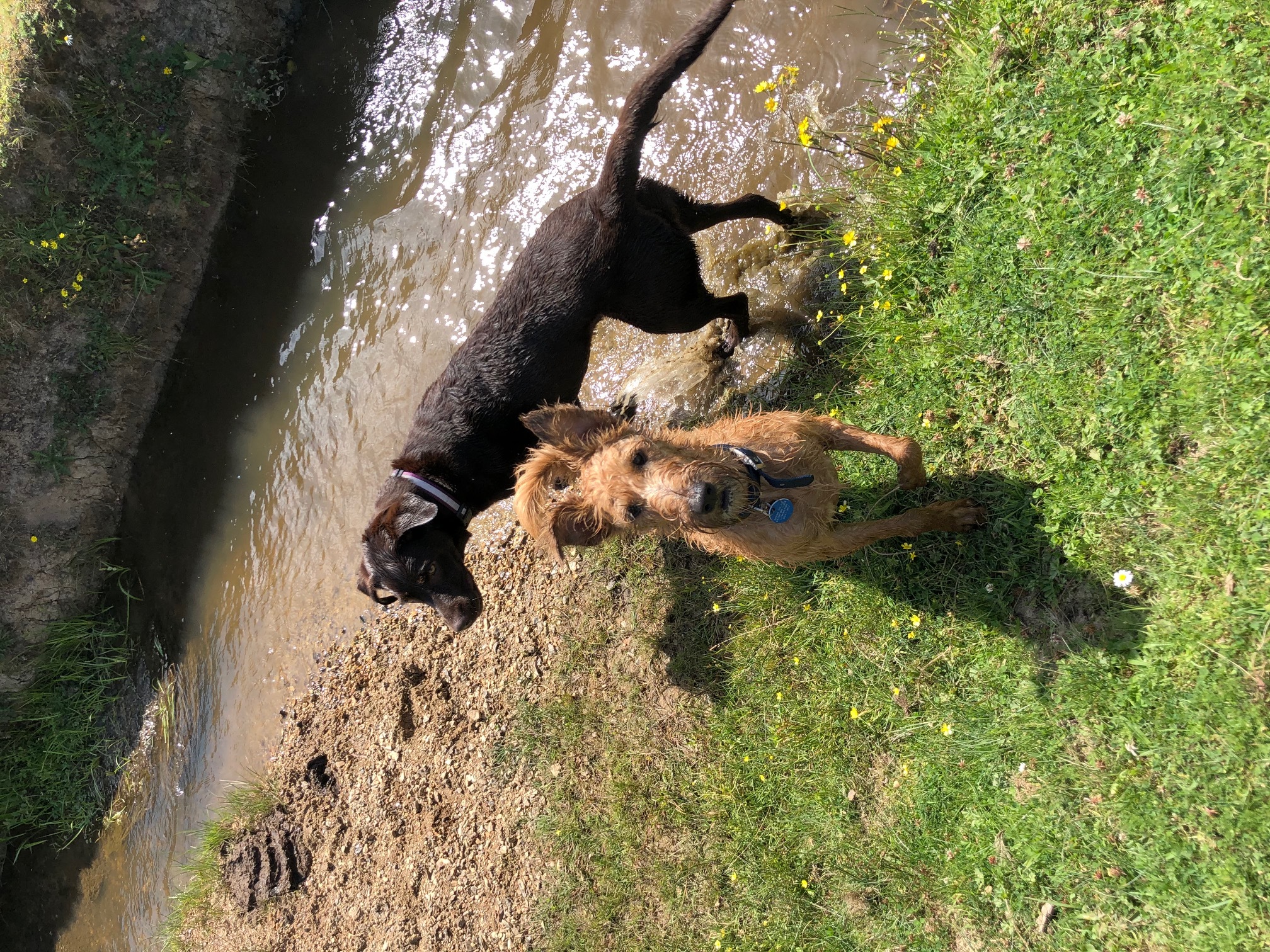 Coping with the garden, with no help at all, was no mean task and my gardening mania took a serious nosedive.  Marybell is a pestie following me around, dropping her tennisball at my feet.  Should I fail to keep up the bowling, she produces her trademark high pitched squeaks, which bring Miss Libs rushing to see who is bullying her baby.  She is so unfailingly kind to Maryb and gives into her every whim .  My attempts at any serious discipline are met with her grave disapproval.

They do make me laugh, however  Libbs doesn’t like to dig at all and has never hidden things in the garden. But she knows exactly where Maryb has her little shrines for her trinkets tucked away (mainly half eaten chews) which she visits regularly.  Libbs, I think, to tease her, walks about on tiptoe, pretending she might just do a spot of digging herself.  Marybell flies around like an agitated bumblebee seeing her off.  It has never come to a real argument, but Bibbs and I do share a wink of amusement.

At last some of our favourite summer visitors are turning up.  Arabella(Dorman), the artist who painted Libby’s portrait for the Kennel Club, came down with her family for the day.  It was an enchanting time, curiously happy in spite of a buffeting wind along the seawall.  The girls were thrilled to have two charming children, Allegra and Orlando, and two Irish Terrier lads, Zorba and Ziggy to play all day long. I was thrilled too.  I can be solitary and easy in my own company, provided of course the dogs are here, but this was a great reminder of how much one enjoys one’s friends. 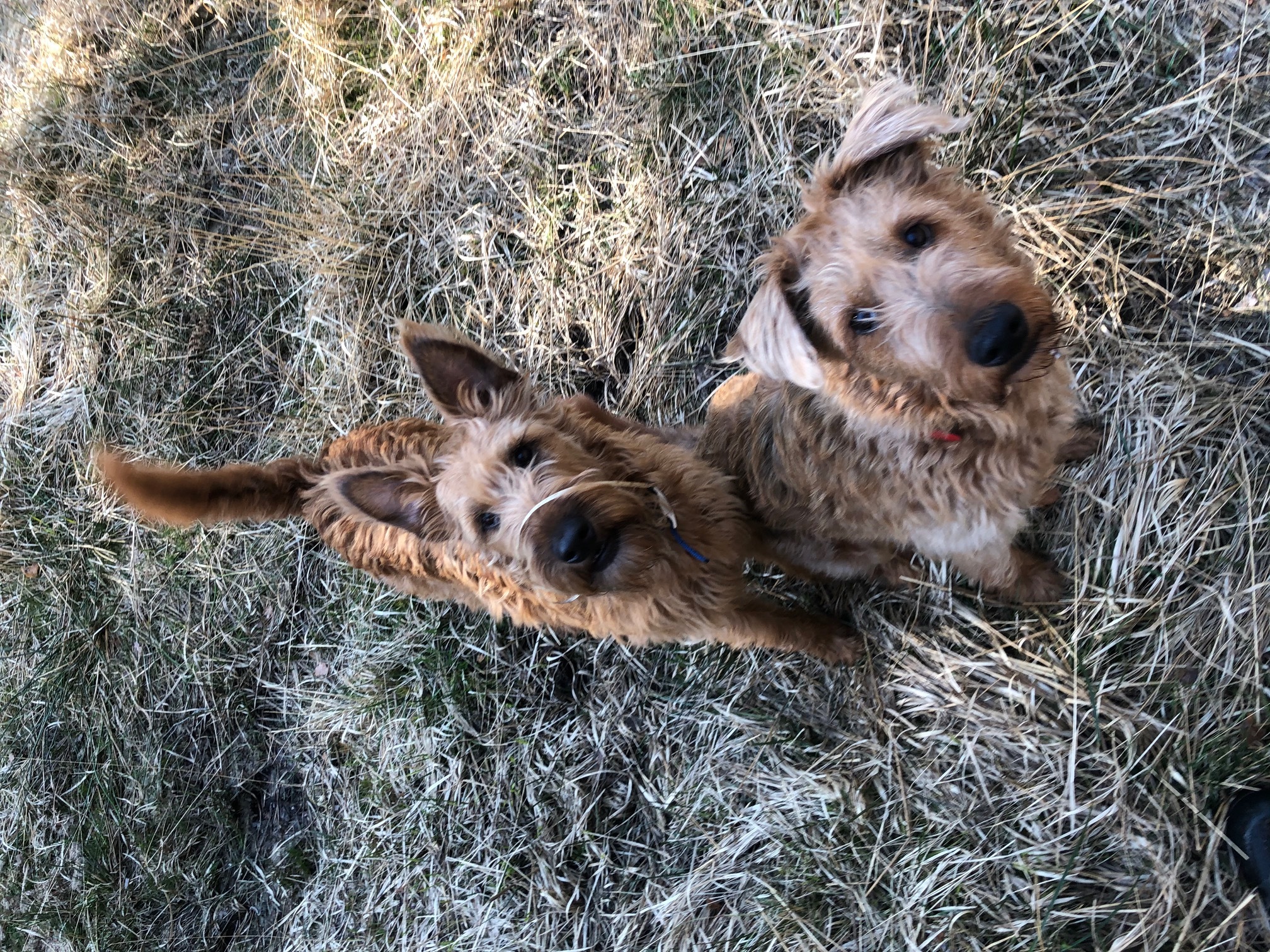 They spent a day with Marie, which included two long walks in the Forest whilst I drove off to the Woodford Valley to meet up with Margo and her best friend Peggy Sue.  They are the two Missies November in the calendar this year.  We had lunch in the garden which runs down to the river and it was wonderful to have swallows, swifts and housemartins whizzing around tending their nests.  Boo, Laura and Imogen have at last buried the beloved Tessie’s ashes under an oak tree in the garden.  It was such an ordeal, which they had put off for months.  I adored Tessie and drew these two little cards to remember her and all our ‘best beloveds’. 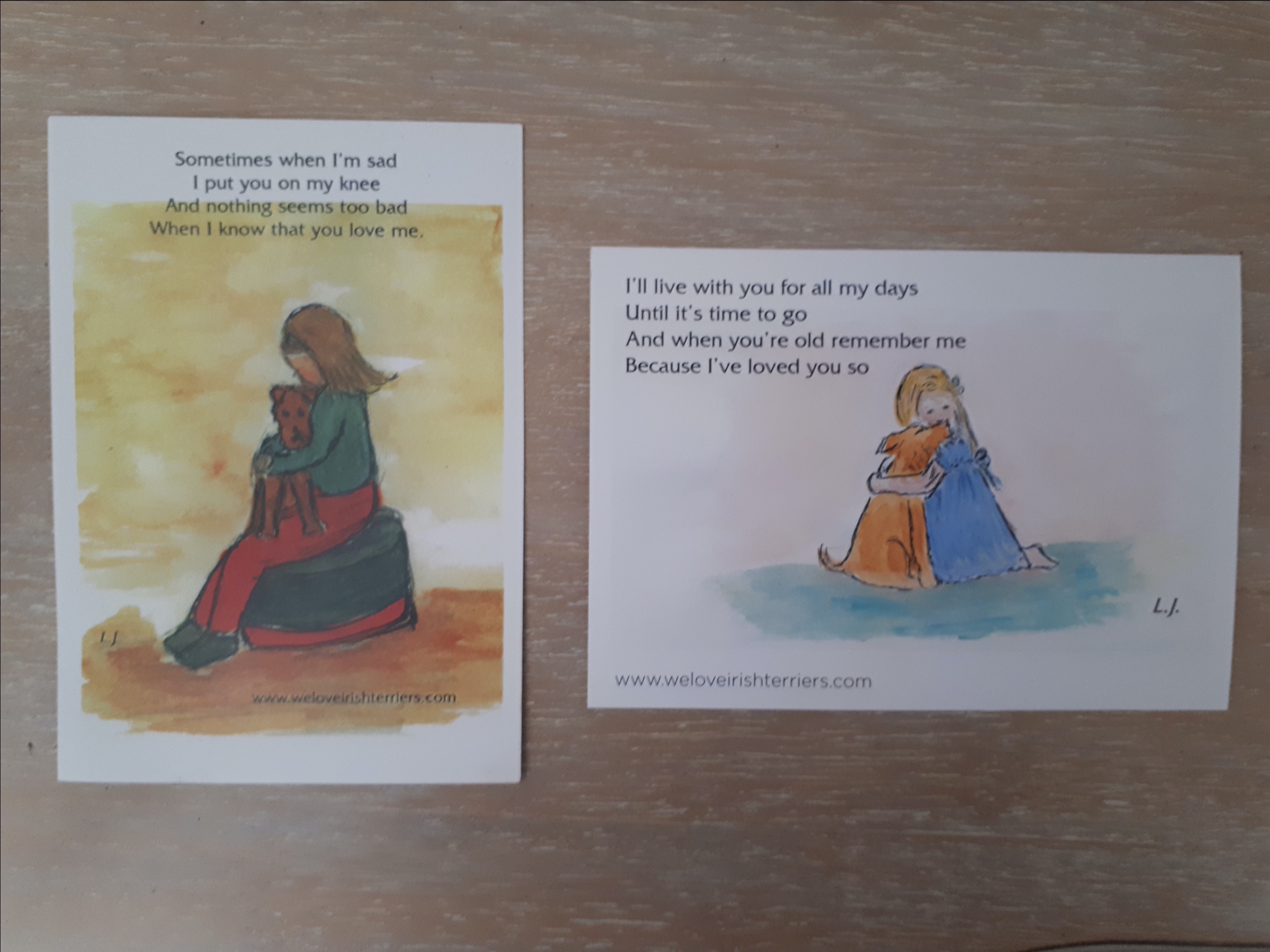 There is a film released this week called ‘Summerland’.  I haven’t seen it yet, but hear that it is a ‘heartwarming story and easy to enjoy’.  The child is played by Lucas Bond, who is one of the Bond cousins who live in Bath.  They were all here for the day some weeks ago, with their lovely dog Insee,  I’ve never seen a child so unimpressed with what most would consider an extraordinary achievement.  He is not at a stage school, but just seems to ‘have the knack’.  All four children in the family are huge favourites with Libbs and Maryb and the Bonds are famous for their long walks! 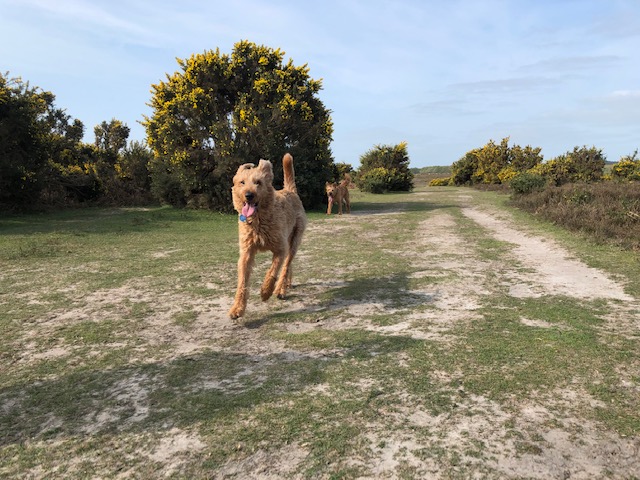 Incidentally, Insee had been losing weight for some time.  He is a young and energetic  Flatcoat cross with seemingly no health problems.  But in spite of eating well, he suddenly became desperately thin.  We were all very worried about him, but with the help of a special vet who deals with diet, they were told that he needed a gluten-free diet  and he is now, miraculously putting on weight.

It seems that the pigeon who came on a hot, hot day, must in all probability been a French racing pigeon.  I asked everyone I could think of who might know and dear Jill Bulkley – yes, who has the lovely Irish Terrier bitch named Ginger -Rodgers or this year’s Miss December.  Jill knew at once from my description of a very large pigeon with a magenta coloured gold speckled neck and with gold rings round his eyes.  She says that in France they breed these birds for show as well as racing.

But why he should have found his way to my front door and taken over our lives for a day was a mystery and even Libbs and Maryb were in awe of him.  I think he must have been overcome by the heat and took a day out in a cool house and garden being fed and watered, with time to rest.  He disappeared quite suddenly as the sun went down.  The girls ran around looking for him, but he was gone.  I do so hope that he made it home to France before the night fell. 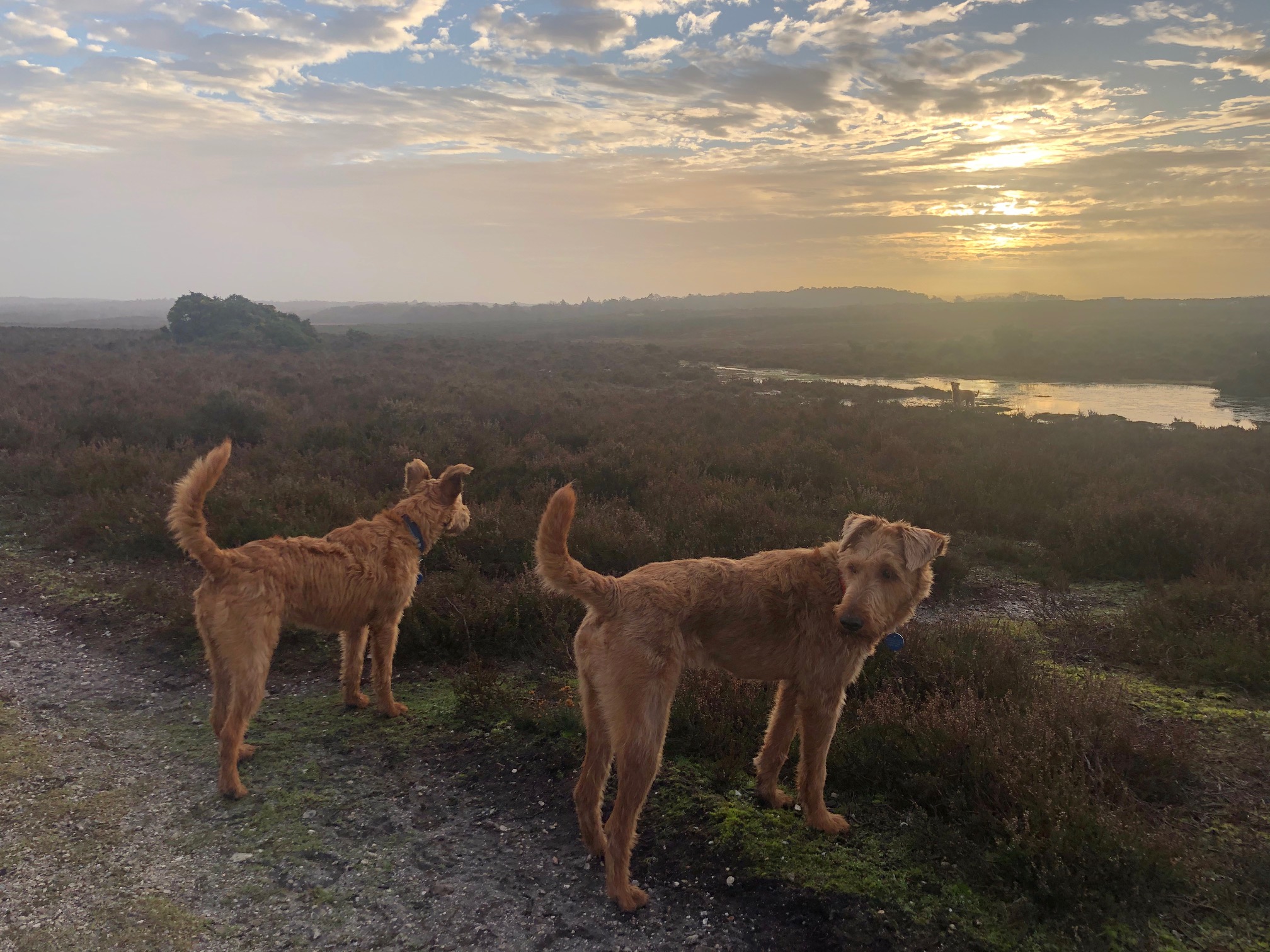 If I were an ancient Athenean, I might surely imagine he was some strange messenger from one of their innumerable gods.  But I know only that he was my friend who came on a lonely lockdown day and that was magical enough for me.

I hope most sincerely that you are all coping with the strange summer.  Best to enjoy the long summer days and remember they won’t last forever!

With many greetings and kindest wishes
My special love to the dogs — they at least love having us at home.