Here, at last, is the piece I wrote for Miss Bunch and Becky Price. Ho when I had been seriously ill some 25
years ago was such a help with my recovery.

I am sorry that we lost it temporally but here it is! 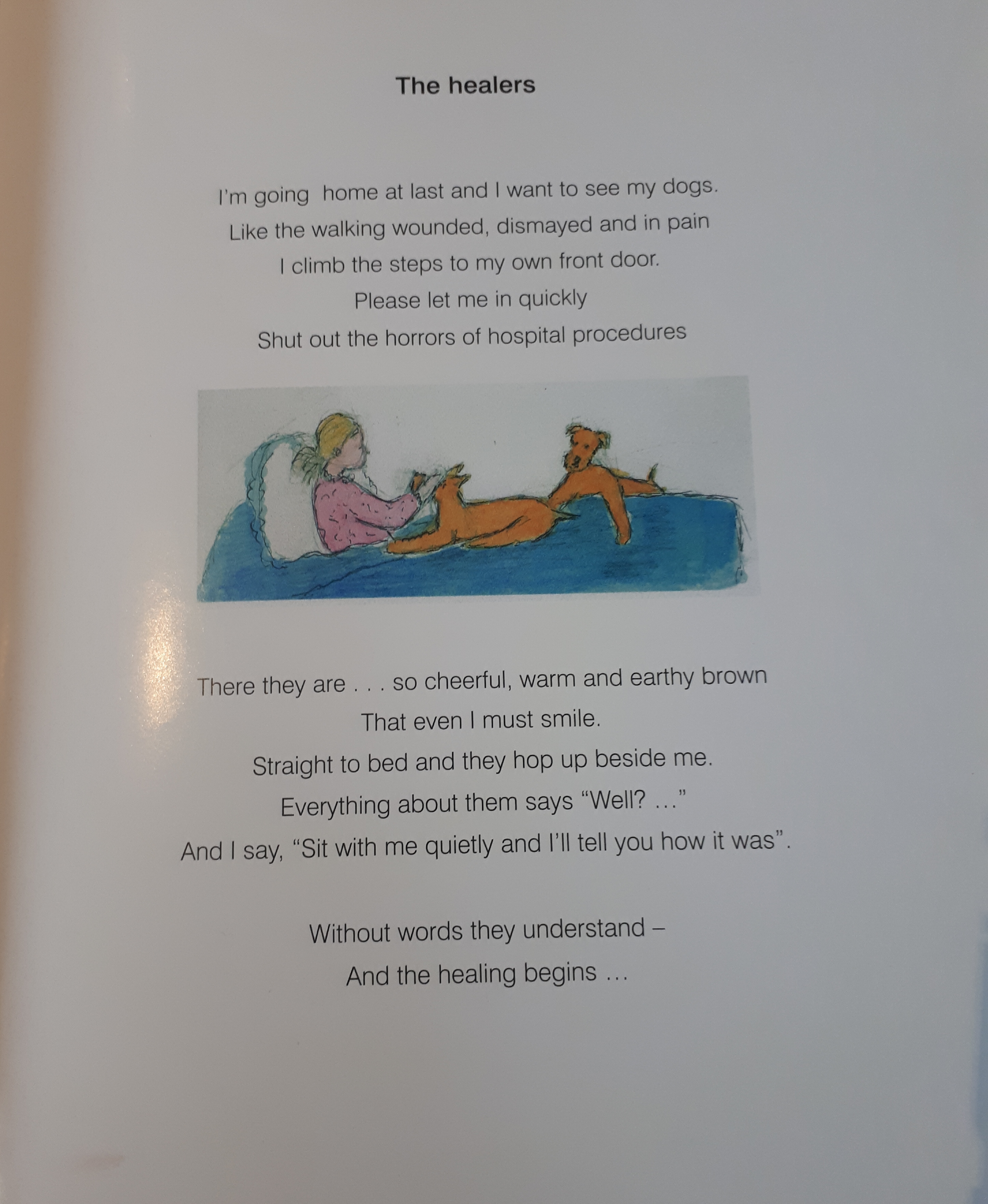 Liberty bell was sitting up close beside me in the conservatory this morning. I was reading the paper and she kept nudging my knee with her nose and glancing up sending me looks of withering disapproval.

I guessed once that she was telling me there had been some mistake – a miscarriage of justice and she’d been wronged. How could she have finished that chew stick whilst Mary B was still happily munching – only half way through hers.

QED – she must have been given a smaller one – the short straw! – now that was neither acceptable –  not fair.

No use my trying to explain that were two sticks left and I didn’t think she would mind and any way, life is not always fair – so move on!

Mary B wasn’t helping either. She is a great tease and once she realised that hers was the better bargain, she decided to press home her advantage.

She pranced about holding the wretched thing in her mouth dashing towards Libb and swerving aside at the last possible moment.

Libby, who is usually so kind and forgiving was, for once absolutely seething.

I felt she was drawing up the battle plan and it was probably time to intervene or at least placate.

“Come darling let’s have a biscuit instead” I suggested, but Mary B knows the word and with a a great leap abandoned her chew stick and raced to line up for the biscuit tin.

But behind her, through the door, I caught site of Miss Libbs stalking very slowly like a chameleon upstairs on tip toes with her the chew in her mouth.

Fortunately Mary Bell is still a a little scatter brain and is always losing her ‘things’. After a brief search she forgot and we played ball in the garden.

Libbs appeared in minutes, all smiles now and joined the game. The funny thing was she hadn’t eaten the stick but tucked it under the cushion in her bed where Jeanette, who comes to clean, has just unearthed it! I’ve been telling her the story and we have been laughing , such a storm in the tea cup.

The Irish terrier Associations A.G.M. always follows hot the heels of Crufts and the thought of another journey to Stratford made my heart sink. Its a a long haul from the coast and the A34 is a fearsome road full of hazards and hold ups. It is much simpler to start from London but this meant leaving Libby and Mary bell at home again. I know they adore Sherine who comes to stay in the house and look after them, but I do miss them. All our dogs and especially Zuli and Beegie loved the trips around the country to shows and visits to friends. Nothing pleased them more than what the children used to call ‘somewhere else’ and Stratford was a favourite place. We all loved the walks along the banks of the Avon and the theatre for me in the evening.

A.G.M. is held in Shottery and the day begins with a knock out match mainly for non show dogs.

I am a hopeless handler and my dogs have all behaved like delinquents in the show ring, tangling round my feet or cart wheeling over my shoulder, several friends remarked that ‘ We missed your performance this year Lucy and I replied “Are you referring to my turns for ‘comic relief’.”

The meeting was remarkably ‘smooth’ this year.  The Micks are doing well – Crufts was excellent for us and the funds are sound. ‘The Year Book’ is as usual quite marvellous – I would say better then any other breed publication and huge tribute to Ann Bradley and Carol Bamsey who produced it – no mean feat.

It comes with automatic membership of the Association and I would encourage everyone who loves the Micks should join to support the breed, share the information and help us all to keep in touch.

We were spared the long inaudible rant about genetic ‘faults’ – what a relief. Having been married to a doctor for many years, I can never understand why veterinary medicine is so hung up on research ” Blame the breeders” but I say “In heavens name look for a cure”.

There was much talk about the fact that the Irish terriers famous two layred coats seems to be disappearing – more shrieks of blame the breeding but I think it could be a mutation  – after all who needs a woolly undercoat today? Do any of us know a Mick who sleeps through the year out of doors – I think not. Some time ago there was feather count done on cadged and wild birds of the same species – I think it involved finches and owls. Unsurprisingly the cadge birds have less down and fewer feathers then their wild cousins. I hear too, that originally Labradors had a very thick woolly undercoat which is almost disappeared. Now talking about birds I am reminded to tell you that our present pair of canaries – Percy Grainger and Biggles have sprung a great surprise. Having lived in perfect harmony sharing a cadge, we thought they were both jolly bachelors. But this spring , to my dismay they seemed to be sparring and when Percy was knocked off his perch,  I had to put them in separate cadges. The was frantic singing from Biggles while Percy fluttered and flirted pressed against the wires.

Now ‘he’ who must be called ‘she’ has laid an egg in her seed pot and is brooding it in exquisite anticipation of an imminent  hatching. I need to remove the egg because I don’t believe its fertile but she is so happy sitting there – and she has after all, waited for 14 year.

I spend some days in London and had lunch with Daisy and her Dads. She is such a dear girl and I find it hard to say goodbye. I was asked to give a good home to her enormous teddy, they said she never played with him on her own. Poor boy must have wondered what had hit him when he arrived here, Libbs and Mary Bell said about him at once and he is a great favourite.

It was amusing to watch them learning to work as a team in order to heave him upstairs.

Juliet and Gingin popped in last week to play and Mary bell was thrilled, they were so sweet together. They had been to look at Marlborough college as a possible school for Virginia. They walked into the Girls house and saw last year house picture – and in the middle, centre of stage of course, was an Irish terrier. Better still there was  a puppy too who ran out to greet them!

Willie (Lord Manners), who is one of our Patrons, confessed that he forgot about all the sensible questions he had planned to ask and did nothing but ‘commune’ with the puppy.

Well, that does not surprise me one little bit!

with many greetings  and love to the dogs Elsie is our dog of the month!